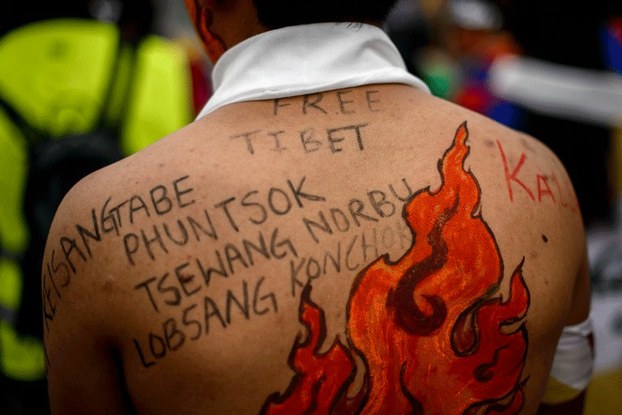 A Tibetan activist demonstrating outside the United Nations offices in Geneva shows his back bearing the names of compatriots who had died after self-immolating in protest against Chinese rule in Tibetan-populated areas, Oct. 22, 2013.

Tsering Woeser, one of 10 Women of Courage honored by the U.S. State Department last year, has used her blog, Invisible Tibet, together with her poetry, historical research and social media platforms like Twitter, to give voice to millions of ethnic Tibetans who are prevented from expressing themselves to the outside world by government curbs on information. In commentaries for RFA, Woeser continues to document Tibetan life under the ruling Chinese Communist Party in the Himalayan region. In a recent essay broadcast through the Mandarin Service, she focuses on the motivating factors behind the recent wave of self-immolations:

Of the Tibetans who have self-immolated so far, 51 have left words behind for the record, whether in the form of a handwritten note, a voice recording or messages left with friends and family. Of these, 46 are dead, and the fate of the other three remains unknown.

[Others] have set light to themselves while shouting slogans like "Let His Holiness the Dalai Lama return to Tibet!" and "Freedom for Tibet!" or "Independence for Tibet!"

Such last words form the basis of an understanding of why Tibetans self-immolate, and there are [a number] of categories:

1. Calling on the international community to support Tibet.

Only three self-immolators mention help from the outside world, and two of them were outside Tibet, so this category is the smallest. Calling on the international community for help and support for the Tibetan problem has always been one of the goals of Tibetans in exile, and is a central strategy of the leadership and agencies of the government-in-exile. Many of the self-immolators don't even mention it.

2. The importance of the Tibetan language to Tibetans.

Many self-immolators speak of protecting the Tibetan tongue, which reflects the huge dissatisfaction and anxiety relating to [Beijing's policies on] language.

Another quite popular belief (which Tibet's exiled political leaders have declared) is that self-immolation by Tibetans is a desperate choice made in the face of an intolerable situation. This factor does exist, but not in the case of most self-immolators, so it shouldn't be regarded as the main explanation for the act of self-immolation.

It is clear that a number of self-immolations involved words of protest against the authorities, and demands. But a lot of other people who self-immolated shouted slogans like "Let His Holiness the Dalai Lama come back to Tibet," "Freedom for Tibet" or "Release the 11th Panchen Lama." Even in the case of self-immolators who left no message or shouted no slogans, demands and protest are implied in the very act of setting fire to oneself.

This reflects the growing trend for a pro-independence attitude among Tibetans under Chinese rule, since 2008.

6. Emphasizing national identity, or calling for unity within Tibetan ranks.

[Some] last words call for solidarity, mainly for the differences between the different Tibetan regions or sectarian, tribal and land disputes—especially those over the grasslands—to be resolved.

7. As the best possible embodiment of Tibetan spiritual strength.

Most self-immolations express courage and commitment to the cause. They are a way to experience personal heroism. It is a way of defending our dignity, sharing the pain, inspiring courage and an expression of ideas of self-sublimation like Nirvana.

Typical last words of this type have included: "They think we are afraid of military repression, but they are wrong," "I ignite my body for the immeasurable grace of Tibetans," "I set fire to myself for the dignity of Tibetans," "I am willing to bear all the pain and the suffering of sentient beings," and "I am willing to contribute my own flesh and blood to show my support and respect."

These sorts of last words are expressive of the most precious spirituality of the Tibetan people.

8. As a form of religious worship and a boycott of the Chinese Communist Party.

Two people self-immolated as a pledge to the Dalai Lama. The second of them was as a form of religious devotion, so his life might embody the Buddhist belief in acquiring merit.

In Soba Rinpoche's suicide note, there are prayers for the long life and good health of the Dalai Lama and all sentient beings. For many Tibetans, such religious urges have become a driving force for self-immolation.

Self-immolators see their self-immolation as a form of action. This is the largest of all the categories. There was a peak of self-immolations around the 18th Party Congress [in November 2012], as self-immolators hoped through their sacrifice to achieve some sort of resolution of the Tibet issue. This isn't just an expression of protest or of desperation.

Tibetans, instead of living in exile or passively waiting for the international community to resolve the Tibet issue, have finally awakened to the need for self-reliance.

As to whether the act of self-immolation will really help solve the issue of Tibet, they do not know.

These heartbreaking last words written by self-immolator Rigzin Phuntsog should be understood as the key to self-immolation: "I cannot continue with a life of passive waiting." It is worth pondering.

There is no trace of violence in the last words of self-immolators; only the Tibetans' willingness for action. The Tibetan Buddhist faith, and His Holiness the Dalai Lama, have always emphasized non-violent teachings, to create a strong binding force for the entire nation. This is reflected in the act of self-immolation, which is self-destructive, and doesn't hurt others.

[Two self-immolators] who arranged to set fire to themselves at the same time use their cell phones to leave behind recorded messages. One said: "We don't want anyone to be harmed because of us." And yet, these Tibetans who are willing to burn to death, but don't want to hurt anyone, are styled as "terrorists" and "thugs" by the Chinese government.