Thoughts on the Scottish Independence Referendum 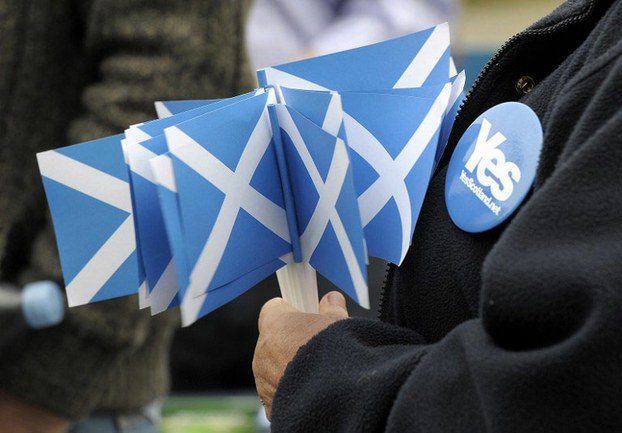 A pro-independence supporter holds campaign material during a rally ahead of the referendum on Scotland's independence in Glasgow, Scotland, Sept. 12, 2014.

Next week, the people of Scotland will decide by referendum whether or not they want independence from the United Kingdom.

According to the latest opinion polls, the two camps are evenly matched, and the battle has been joined by politicians and celebrities alike in a last-ditch bid to win people over to their way of thinking.

Those opposed to independence include current and former U.K. prime ministers, while the current Scottish first minister, his ministers and the Scottish National Party (SNP) are ranged on the side of independence.

It's interesting to see that some Chinese netizens who support Beijing's policies have made a link between the Scottish independence referendum and the recent unofficial referendum held over universal suffrage in Hong Kong.

In their flawed analysis of the similarities between these two very different places, they see Scotland's call for independence as poetic justice for a U.K. government that dared to interfere in Beijing's policies in Hong Kong.

The implication seems to be that British government support for Hong Kong's political rights movement gave rise to the independence movement in Scotland.

It makes pretty ridiculous reading because there's no causal link between the two, so where is the "justice?"

Turning it around, it looks a lot like schadenfreude aimed at the British government by those who oppose the pro-democracy movement in Hong Kong.

And it betrays the fundamental weakness of their position.

That the Chinese government and its followers are opposed to the U.K. government's view on the question of Hong Kong reveals their ignorance of international relations and international law.

Any government should support reasonable demands by people anywhere in the world for their political rights.

The U.K. government has a moral duty to makes its views clear on this matter.

It's a matter of seeing justice done and has nothing to do with interference in the internal affairs of another country.

Similarly, the Chinese government has the right to speak out on behalf of citizens of any other country whose political rights are being violated.

The sad thing is that the Chinese government all too frequently is on the same side as oppressive regimes and human rights violators.

Hong Kong people are demanding the right to choose their own chief executive through genuine universal suffrage, while the Scots are calling for the right to determine whether or not Scotland remains part of the U.K.

The British government has expressed an opinion on both political movements, both of which express reasonable and legitimate political demands by their citizens.

However, the way in which the British government treats the aspirations of the Scottish people, and the way the Chinese government approaches those of Hong Kong people are totally different.

In Scotland, the British government has agreed to bow to the will of the majority via a referendum, and has campaigned against independence, debating on an equal footing with the politicians who support it.

Both are relying on exhaustive argument to sway the opinions of voters.

But China has ignored the legitimate and reasonable demands of the Hong Kong people, while its politicians have continually intimidated them, even threatening to use the army to suppress any so-called "political unrest, should it occur."

It has used the standing committee of the National People's Congress
(NPC) to slam the door in the face of any further political dialogue with the people of Hong Kong, taking the top-down approach and vetoing any view that is different from its own.

One of these methods will lead to long-term social stability, while the other will be divisive, causing severe and prolonged social unrest.

Hu Shaojiang is the pen-name of a Hong Kong-based political commentator, scholar and outspoken critic of the ruling Chinese Communist Party.

Well-written opinion by Hu Shaojiang that exposes Beijing's weak arguments & hypocrisy. Another example of the hypocritical behavior of the CCP is that whenever the Dalai Lama visits foreign countries, Beijing goes nuts & foams at the mouth threatening all kinds of sanctions. But when Xi Jingping visited the UK last time, he met w/ the Scottish National Party leader who advocates Scotland independence. Beijing claims the Dalai Lama is a separatist, even though the Dalai Lama no longer seeks Tibetan independence, but Chinese leaders feel perfectly comfortable meeting a Scottish separatist? What is Chinese for hypocrite?