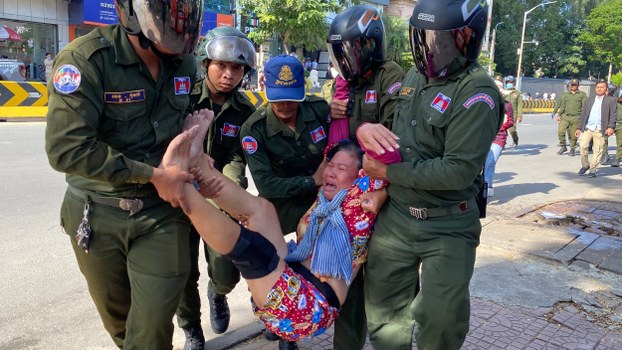 Sat Pha is taken away by authorities while protesting in front of the Chinese embassy in Phnom Penh, Oct. 23, 2020.

The Cambodian authorities should put an end to the arbitrary arresting, harassing, and threatening of activists who took part in and organized protests on the anniversary of the Paris Peace Agreements last week, a global rights organization said Wednesday.

New York-based Human Rights Watch (HRW) also urged governments that signed the Oct. 23, 1991 accords, which put an end to years of civil war in Cambodia and ushered in democratic elections, to publicly defend Cambodians facing attacks for calling for the implementation of its provisions on democracy and rights.

On Monday, Prime Minister Hun Sen threatened the family of Ho Vann, an exiled former lawmaker with the banned Cambodia National Rescue Party (CNRP), following protests held on the 29thanniversary of the Paris Peace Agreements in the capital Phnom Penh, warning him to “stop leading others to jail” from the U.S.

“While you are living free overseas, your family is in Phnom Penh … You are crazy. Be careful—your wife and children cannot sleep well and must be frightened. If you can stop, you should stop,” Hun Sen said.

The prime minister also alleged that he had been spying on opposition Zoom calls and said Ho Vann had spoken to local CNRP supporters about paying them to attend protests.

“It is bad enough to arrest peaceful protesters, but it is an assault on basic decency for Hun Sen to threaten family members, including children,” Phil Robertson, deputy Asia director at HRW, said in a statement.

“Prime Minister Hun Sen set the tone for abuse by threatening those planning to protest the failure of the government to keep its promises on rights and democracy in the Paris Peace Agreements.”

On Oct. 23, CNRP activists, relatives of detained activists, as well as others, held protests in front of the U.S., Chinese, and French embassies seeking to hand over petitions calling on Cambodia’s government to respect the Paris Accords. Authorities dragged protesters away from the embassies and blocked the delivery of the petition to the Chinese embassy.

Three CNRP activists—Ton Nymul, Lim San, and Yory Sreymom—were arrested and two days later charged by the Phnom Penh Municipal Court with incitement to commit a felony. They are now in pretrial detention.

During the protest, authorities also pulled Sath Pha, the cousin of detained CNRP activist Heng Sothy, away from the Chinese embassy by her limbs. The activist was arrested from the hospital where she was receiving medical treatment on Wednesday and also charged with incitement.

“As prime minister he is responsible for the behavior of police who use unnecessary force against opposition activists and other peaceful protesters,” he said.

Responding to HRW’s statement on Wednesday, Kata Orn, a member of the government’s Cambodia Human Rights Committee (CHRC), told RFA’s Khmer Service that the recent arrests were “legal” and carried out “to protect public order.”

He said that while the constitution protects the rights of the people, those rights are “limited by other laws.”

Last week, on the anniversary of the signing of the accords, Justice Ministry and CHRC spokesperson Chin Malin said in a post on his Facebook page that the agreements were no longer valid and that the government had only cracked down on people committing crimes threatening national security and public order.

Kata Orn on Wednesday also defended the government’s spying on the Zoom calls of opposition activists, repeating the pretext that doing so was necessary due to national security concerns.

“If we have evidence Ho Vann’s family is implicated with him, then his family members are accomplices,” he said.

“Hun Sen’s comment was made as a politician and the leader of a country to the people so they can reconsider their actions and avoid any illegal activities or legal action.”

Cambodia’s government has stepped up its targeting of opposition activists this year, with at least 30 currently in prison based on what HRW calls politically motivated charges.