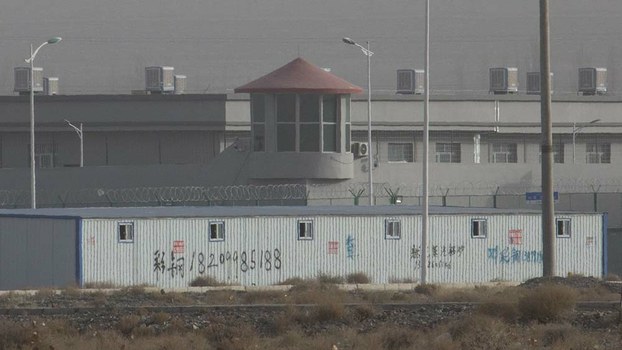 A guard tower and barbed wire fences are seen around an internment camp in the XUAR's Atush city, Dec. 3, 2018.

Ayshamgul, an ethnic Uyghur Chinese national, was detained at a political “re-education camp” in China’s Xinjiang Uyghur Autonomous Region (XUAR) twice in 2017 and then held under virtual house arrest for nearly one year after visiting her husband’s home country of Pakistan—one of several nations blacklisted by China’s government because of the threat of religious extremism. The woman, who asked to use a pseudonym because she fears for her safety, told RFA’s Uyghur Service in a recent interview that she endured miserable conditions in the camp network, where authorities are believed to have detained more than 1 million Uyghurs and other Muslim minorities accused of harboring “strong religious views” and “politically incorrect” ideas throughout the XUAR since April 2017. Ayshamgul said that she now regularly experiences anxiety and panic attacks as a result of the mental abuse and beatings she suffered during her incarceration:

I am married to a Pakistani man. I was detained from my home in [the XUAR capital] Urumqi on April 8, 2017 for visiting Pakistan and transferred back to my home county, where I was held among 160 people for re-education until my release in June. However, in July of the same year, I was detained again and held until September 2017.

The conditions of the re-education center where I was detained were horrible. There were several people held there between the ages of 80 and 96. We were forced to study [political ideology] for 14 hours every day. We would get up at 5:00 a.m. and clean the cell. We were only allowed to go to bed at 9:00 p.m. The food was really bad—usually undercooked steamed buns and vegetable soup, but never any meat.

The situation inside was tragic. Once every two days we were tormented and forced to admit our “wrongdoings.” Some of those among us had their fingernails pulled out. Sometimes people were taken away during the night and we would never see them again.

Each class was made up of 70-80 people, and there was barbed wire fencing between us and the teachers, as well as armed guards at the door. Not even the teachers were allowed to go home—they would only receive permission to see their families once a month.

There were armed guards stationed above us every five meters, holding their guns trained on our heads. We had no freedom in there. We weren’t allowed to talk to each other, and there were cameras everywhere—even in the bathroom. The place I was detained in was called a “re-education center,” but you can call it a prison.

The teachers told us that if we did anything we weren’t supposed to, or even speak to one another, the guards would have the right to shoot us. They said that we were entrusted to them, and wouldn’t even have the right to ask why, if they fired on us.

Initially, they housed us 160 people who visited foreign countries together in a former primary school, but later we were transferred to a sanatorium for 16 days. There were 50 to 60 people in each room. They didn’t give us blankets. Sometimes I could sleep on a bed, but other times I had to sleep on the floor.

Later, I was transferred to a facility where some 4,000 people were housed. They put 24 people in a room big enough for 12 people. There were only five beds in the room, so we had to sleep side-to-side to fit. The room had cameras trained on our beds, so we weren’t allowed to speak or even change clothes.

Because of this experience, I am so afraid these days. I dream about the suffering in the camp most of the time now.