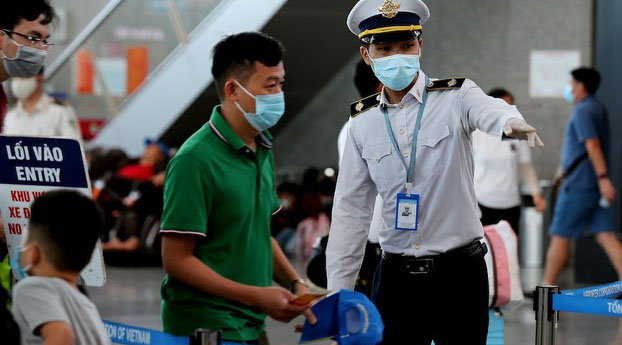 Vietnam’s Danang has suspended all flights and travel by train or bus to or from the coastal city for 15 days following a surge of at least 18 cases of COVID-19 infection over the weekend, sources in the country say.

Vietnam had previously been among the most successful countries in tackling COVID-19, reporting no deaths among its 95 million people—a record that was attributed to effective contact tracing, strict quarantines, and early testing.

But on July 23, Vietnam confirmed two new cases of infection, breaking a streak of no new cases in 99 days, and at least 18 have now been confirmed in Danang alone, with three others also listed in the nearby province of Quang Nam and one in Quang Ngai, according to state media reports.

Earlier reports said the government was trying to evacuate some 80,000 mostly domestic tourists from the popular beach resort area, but state media later said many had left on their own, while other travelers were quarantining in hotels.

“This area has seen an outbreak of COVID-19, so the whole area is under quarantine,” said Thanh Lam, a city resident living near Danang Hospital.

“Many main streets near the hospital are also under quarantine, and some food stores, markets, and supermarkets are now selling food ‘to go,’” she said, adding, “Other shops are closed.”

“People had a lot of experience with the earlier orders to observe social distancing, and so they are not showing much excitement now,” he said. “In general, Danang is preparing well enough for this second outbreak of the pandemic.”

“[It has also] required citizens to wear face masks whenever outdoors, and asked them not to leave their home unless for essential trips while maintaining a two-meter distance in social interactions,” Tuoi Tre said.

The new surge in cases may be tied to a recent influx of migrants illegally entering the area from China, Dinh said.

“I have heard that some Chinese people have illegally come into Vietnam, but that the government could not control or manage them,” he said.

“For many days, no new COVID cases were reported in Vietnam. But many foreigners have now entered Vietnam illegally, and this may be the reason that COVID-19 is now spreading in the city,” he said.

Officials in Danang and other Vietnamese cities and provinces have recently discovered dozens of Chinese who entered the country illegally and were found staying in local hotels and other facilities in July, state media and other sources say.

Local authorities must carefully test and isolate anyone illegally entering Vietnam, Dinh said, adding, “and they must then announce the test results to local residents, because we need to know the reason for this second spread of the pandemic in the city.”