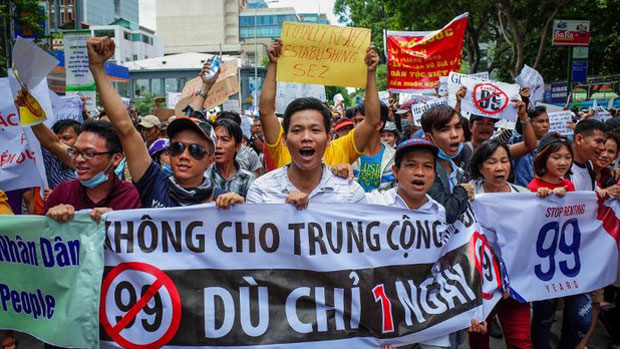 Vietnamese civil society groups and individuals based both in Vietnam and abroad called on their government in a petition on Wednesday to implement political reforms, guaranteeing basic rights to assembly and freedom of the press and freeing prisoners jailed for peacefully expressing their views.

The petition, titled “An Eight-Point Demand for 2019,” was sent to national leaders and to members of Vietnam’s National Assembly, and mirrors an eight-point petition presented to the 1919 Versailles Peace Conference by former Vietnamese leader Ho Chi Minh.

Included in the petition’s demands are calls for the release of political prisoners, reform of Vietnam’s legal system, guarantees for a free press and an end to censorship, the right to freedom of assembly and association, freedom of travel, and de-politicization of the country’s schools.

It also calls for respect for rights already guaranteed by Vietnam’s constitution and the establishing of free and transparent elections.

Implementation of these eight points will be the only way for Vietnam to “achieve the goal of a prosperous people, a strong nation, and a democratic, fair, and civilized society,” petitioners declare in the document, copies of which were also sent to the United Nations and to foreign diplomatic offices in Vietnam.

The petition was signed by groups and individuals in Vietnam, Poland, the Czech Republic, and France.

Speaking on Wednesday to RFA’s Vietnamese Service, Professor Hoang Dung—an instructor at a teacher training college in Vietnam’s Ho Chi Minh City, also called Saigon—said  it would be naïve to think that today’s petition will force rapid change in the one-party communist state.

Today’s petition stands out as an “historical marker” presenting Vietnam’s government and ruling party with a dilemma, though, he said.

“Their legitimacy is being challenged,” he said.

“Their founding leader, Ho Chi Minh, made many of these demands a hundred years ago.  But now that we are making demands similar to the earlier ones, they may find they can’t agree.”

It also controls all media, censors the internet, and restricts basic freedoms of expression.

Vietnamese people stand up for their right. I know it's not easy. While Lao people stand by and watch when their lands were taken away.

They should add one more point petition to make it to NINE POINT by adding STOLEN LAOS LAND SHOULD BE RETURN TO LAOS.