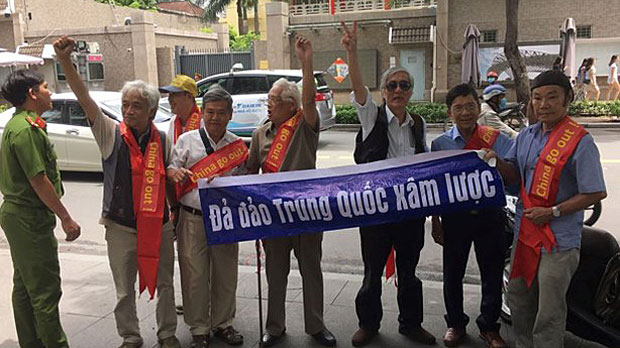 A group of well-known Vietnamese scholars gathered this weekend outside China’s consulate in Ho Chi Minh City to protest Chinese ship movements in waters claimed by Vietnam in the South China Sea, dispersing only after an angry exchange with police, sources told RFA.

Though previously watched closely by police, the seven academics had managed to contact each other and meet at the protest site, where they shouted slogans and carried a large banner reading “Down with China’s Invasion,” Hoang Dung said.

When a  policeman approached and advised them to go home, adding that they should leave the issue for the government to address, one participant angrily shouted his objections, Hoang Dung said.

Writing on his Facebook page following the protest, Hoang Dung said the protest had gone smoothly at first.

“But suddenly a very young police officer arrived and told us gently and politely to disperse, saying we should leave concerns about China for the state to deal with.”

“Tuong Lai became furious at this and shouted ‘Liar! Tell me who in our government is dealing with this aggression!’” Hoang Dung wrote.

“Maybe the Ministry of Public Security should issue a directive prohibiting its officers from saying things like this,” Hoang Dung added. “They contradict the traditions of the Vietnamese people, who say ‘Even helpless women can fight the enemy when they’re at the front door.”

After the exchange, the protesters left without incident, Hoang Dung said.

Saturday’s demonstration followed an earlier protest on Aug. 6 in Hanoi in which authorities forced 10 activists to disperse after they displayed signs and shouted slogans opposing China’s survey of an offshore oil block located within Vietnam’s exclusive economic zone (EEZ).

Tensions recently rose when the Haiyang Dizhi 8, a ship operated by the China Geological Survey, conducted a 12-day survey of waters near the disputed Spratley Islands, with Chinese Coast Guard ships following in support.

At one point, China’s survey intruded into an offshore oil block in Vietnam’s exclusive economic zone (EEZ) off of the Spratlys’ westernmost reef, known as Vanguard Bank, and vessels from the two countries were later involved in a weeks-long standoff near the area.

Sorry, I can't help/restrain myself!
Few points to consider, they are:

I know you all are retired, but; plz; do better the next time! How about bring along another thousands of people. Would it be more formidable?

'China go out'...really! Is that the best slogan that you can come up with? I think Google Translation will top that every time! Oh, retiree...you don't say.

That's how/why Mary Phangs gets an advantage!
That's why we can't get an upper hands vs the communist goons.

If you are scholars you should know that the Vietnam's prime minister, Phạm Văn Đồng, sent a formal note to China, stating that the Government of the Democratic Republic of Vietnam respected the decision on the 12 nautical mile limit of territorial waters including China’s Paracel Islands & Spratly Islands in 1958.

It's a propaganda from a Red Chinese.

Only in Vietnam: while intelligent, disciplined, patient and young Vietnamese soldiers are effectively, driving the the sheepish Chinese Haiyang Dizhi 8 away from Vietnam's Vanguard Bank - without firing a shot, these elderly academics in their 80's, angered at youthful but polite policeman, wanted more "actions" against China and cited "Vietnamese women's demonstrated courage of resistance to invaders"? Lucky me: a Vietnamese academic but female!

Dear Vietnam, your Red Chinese brother starts to feel the effect of trade war with the US. Plus he has many wars to fight at the same time such as pensions to be paid, bad debts to manage, one belt-one road that countries around the world can see now as a trap, business grow to persue at all cost... Red China won't hesutate to steal resources from neighbors near and far, Vietnam included. Beware and get ready, China is coming !