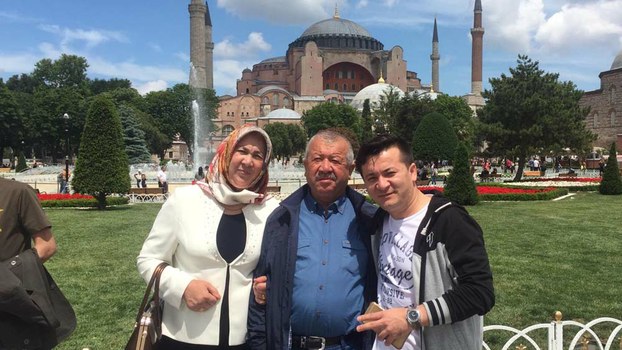 Zahirshah Ablimit (R) and his parents pose in front of the Hagia Sophia in Istanbul, Turkey, in an undated photo.

Authorities in northwest China’s Xinjiang Uyghur Autonomous Region (XUAR) are holding a popular Uyghur singer and his parents in political re-education camps, according to local officials and his brother.

But sources recently told RFA’s Uyghur Service that the vocalist had been detained by authorities in Atush last year after traveling with his parents to Turkey—one of several countries blacklisted by China’s government because of the threat of religious extremism.

An officer at the Suntagh Police Station in Atush told RFA that staff from his department were involved in detaining Zahirshah Ablimit’s parents and placing them in a re-education camp, where authorities have detained Uyghurs and other Muslim ethnic minorities accused of harboring “strong religious views” and “politically incorrect” ideas throughout the XUAR since April 2017.

He said he was not sure which camp Zahirshah Ablimit’s parents are being held in and was “not fully aware of [the details] of this case,” before directing further inquiries to regional police.

But a second officer confirmed that Zahirshah Ablimit had been arrested and sent to the No. 5 Re-education Camp in the Gongye Yuanqu industrial district, “about 10 kilometers (six miles) from the [Atush] city center.”

“I don’t know the details—I only know that he is in a re-education camp,” the officer said, adding that he was unaware of the date of Zahirshah Ablimit’s arrest or the reason he was detained.

Zahirshah Ablimit’s U.S.-based brother, Abduwaris Ablimit, told RFA that he had recently learned of the detention of his family members.

“My brother spent 15 years of his life as a singer—he was never involved in anything else,” Abduwaris Ablimit said, adding that his brother had exhibited no signs of religious extremism.

“He hardly ever visited home—he was living in [the XUAR capital] Urumqi, and often travelled to many Chinese mainland cities to perform. He was determined to become successful.”

Abduwaris Ablimit said he did not understand why authorities had targeted his parents and brother.

“We are a very ordinary family,” he said.

Meanwhile, Abduwaris Ablimit said he had lost contact with his three sisters, and believes they may have also been arrested.

He said his wife, who lives in Kyrgyzstan with their two children, recently spoke with local media as part of a joint effort to inform the international community about their detained family members and about the persecution of the Uyghur people in the XUAR.

“If we can voice the suffering of our people to the world, at least it gives us comfort to know that we have contributed” to trying to end it, he said.

“I have decided to do what I can, and I will provide testimony to the media regarding my family. I will provide proof that they are suffering in the Chinese camps.”

Mass detentions in the XUAR have drawn significant attention from the international community, and particularly from the U.S., where lawmakers have called for access to the camps and proposed sanctions against officials and entities in China deemed responsible for abusing the rights of ethnic Uyghurs and other Muslim minorities.

While Beijing initially denied the existence of re-education camps, the chairman of the XUAR government, Shohrat Zakir, told China’s official Xinhua news agency in October that the facilities are an effective tool to protect the country from terrorism and provide vocational training for Uyghurs.

But reporting by RFA’s Uyghur Service and other media organizations has shown that those held in the camps are detained against their will, are subjected to political indoctrination and rough treatment at the hands of their overseers, and endure poor diets and unhygienic conditions in the often overcrowded facilities. The atmosphere is more like a prison than any kind of school, multiple sources say.

Adrian Zenz, a lecturer in social research methods at the Germany-based European School of Culture and Theology, has said that some 1.1 million people are or have been detained in the camps—equating to 10 to 11 percent of the adult Muslim population of the XUAR.

Earlier this month, Scott Busby, the deputy assistant secretary in the Bureau of Democracy, Human Rights and Labor at the U.S. Department of State, said there are "at least 800,000 and possibly up to a couple of million" Uyghurs and others detained at re-education camps in the XUAR without charges, citing U.S. intelligence assessments.

Citing credible reports, U.S. lawmakers Marco Rubio and Chris Smith, who head the bipartisan Congressional-Executive Commission on China, recently called the situation in the XUAR "the largest mass incarceration of a minority population in the world today."