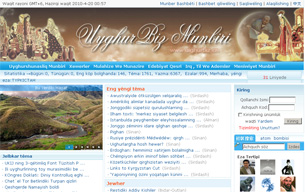 HONG KONG—China's restoration of most Internet services to the troubled region of Xinjiang, 10 months after deadly ethnic rioting, was a political decision with no real impact on continuing controls on the Muslim ethnic minority Uyghurs, analysts said.

Official media announced on Friday the full restoration of Internet services, which had been subject to a full and then partial lockdown since ethnic rioting was sparked last July by a Uyghur demonstration in the regional capital, Urumqi.

"It has been 302 days in all. We netizens in Xinjiang were isolated from the world," wrote user Jiayi on the Sina microblogging service. "Today, I want to stand here and say, 'We're back!'"

"At least I have been able to visit some of the Web sites I need to," said a Uyghur employee in a healthcare products company in Urumqi.

"I couldn’t access all the Web sites I wanted to visit, but still we’re happy that the Internet is restored," he said.

"After a huge effort, I am finally online and have succeeded in getting around the Great Firewall," wrote user Su Chan on Uyghur Web site Uighurbiz.net.

"Concerned people should know—the reason less people are under the control of Xinjiang, and more specifically Beijing, is because of the widespread dissemination of software tools that allow them to bypass the Great Firewall," Su Chan wrote.

"It's pretty much open now," said a Han Chinese resident surnamed Li. "But I don't know exactly which Web sites you can visit. I just go online to listen to music and chat. I don't care about the rest."

Dilxat Raxit, spokesman for the Munich-based World Uyghur Congress, said the opening up of Internet services in Xinjiang does not add up to freedom of expression online for Uyghurs, however.

"Nongovernment Web sites can still be closed down at any time," he said.

"Anything online that expresses a slightly different view to that of the government, that expresses views on freedom, will be suppressed because it is seen as harming 'stability.'"

Uyghurs based in Urumqi said that popular Uyghur Web sites including Uighurbiz, Diyarim.com, Salkin, Shabnem, and Orkhum remain closed, with many of their editors and moderators still behind bars.

And in Urumqi, an official complaints hot line confirmed that censorship of online content would continue as before.

An employee who answered the phone at the Xinjiang Negative News Reporting Line said "negative" information is that which harms ethnic unity and national security.

"It is information which, according to the rules on Internet information, harms unity, especially ethnic unity in Xinjiang, such as hate speech between [ethnic groups]," he said.

"It also has to do with national level rules about harming state security."

Xinjiang's regional government, for which new leadership has been appointed since the violence, said the move was made with the interests of Xinjiang in mind.

But analysts said it had more to do with the timing of last week's Sino-U.S. dialogue on human rights.

"Restoring the Internet in the Uyghur region after 10 months doesn’t mean that the Chinese government cares about people's needs," said exiled Uyghur scholar Alimjan Inayet, of the University of Ege in Turkey.

He said the move was likely the result of international pressure on Beijing.

"In particular, the U.S.-China human rights dialogue in Washington on May 12 definitely had a certain impact on their decision," he said.

Chinese Blogger Yang Hengjun said the move was part of an attempt to project a softer image of Chinese rule in Xinjiang, coming as it did ahead of a promised new package of economic measures for the region.

"They've just had a change of leadership, so they have to adopt a strategy, something 'harmonious,'" Yang said. "China is also about to bring out a package of measures to boost Xinjiang, hoping that this will win hearts and minds."

"The Sino-U.S. dialogue on human rights is definitely a factor as well," he added.

Yang said the authorities might have used the closing of the Internet, possibly the largest shut-down enacted by a government since the Internet began, as an experiment and as a warning against social unrest elsewhere in China.

"They are closing the Internet down to see what people do," Yang said.

"It's possible that this event in Xinjiang might set a precedent, so that if, in the future, there were to be trouble in Hunan, they could shut down the Internet there, too."

"They could even do it at a nationwide level if there were to be problems on a nationwide scale," Yang added.

"Nowadays people rely totally on the Internet for their information. If the Internet is closed down, this society dies."

U.S. officials said no specific progress was made in last week's human rights dialogue in Washington, where China's crackdown on Uyghurs was raised alongside concerns about Tibet and individual cases of jailed dissidents.