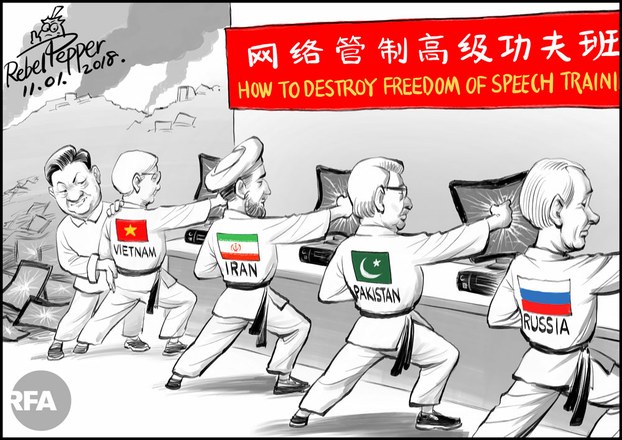 China was the world’s worst abuser of internet freedom for the fourth consecutive year, while Vietnam, Myanmar and Cambodia were not far behind, according to a Freedom House report published Tuesday.

In Freedom on the Net 2019: The Crisis of Social Media, the Washington-based independent watchdog organization evaluated 65 countries between June 2018 and May 2019, and found that 33 were on an “overall decline” in terms of internet freedom.

The study evaluated the 65 countries in terms of “obstacles to access,” “limits on content,” and “violations of user rights,” assigning each country a score between zero (least free) and 100 (most free).

According to the report, “Censorship reached unprecedented extremes as the government enhanced its information controls in advance of the 30th anniversary of the Tiananmen Square massacre and in the face of widespread antigovernment protests in Hong Kong.”

It cited examples of government administrators closing down individual accounts on WeChat for allegedly “deviant” behavior such as “commenting on environmental disasters.”

The threat of account lockdown caused users to censor themselves or lose access to the platform, which has become necessary in everyday life in China, giving users access to services like transportation and banking.

The report emphasized that the policy “narrowed avenues for digital mobilization,” and “silenced online activism.”

China was also found to have increased its efforts to use online platforms to influence foreign political outcomes, including cyberattacks and information warfare linked to interference in the 2019 federal elections in Australia.

The report also cited China’s recruitment of operatives to monitor internet usage while reporting “problematic content and accounts” to the government as a violation of human rights.

In addition, the report brought up the issue of China’s role as a leader in the creation, use and transfer of social media surveillance tools. For example, Semptian, the Chinese developer of the Aegis surveillance system, boasts that it is currently monitoring 200 million people in China, which is one-fourth of all Chinese internet users.

Among Semptian’s products are a national firewall solution which is said to be as effective as China’s own “Great Firewall,” through which the government controls internet content in China.

The report also pointed out that companies that make and use these systems do so while working in close cooperation with the country’s intelligence agencies.

It points to one case of a researcher discovering a database used by law enforcement that contained social media profiles, messages and shared files of about 364 million users.

The report cited a case from March 2019 when a member of the Uyghur Muslim minority from the Xinjiang Uyghur Autonomous Region (XUAR) was detained for three days because someone in his WeChat contacts list had “checked in” from Saudi Arabia.

While Vietnam, Myanmar and Cambodia were not mentioned much in the report itself, Freedom House’s website provided in-depth reports for each country in the study.

While Cambodia’s internet freedom score of 43 placed it in the “partly free” designation, it barely cleared 39-point-or-lower threshold of “not free.” Of 16 Asia-Pacific countries included in the study, Cambodia ranked 11th.

“In the run-up to the 2018 elections, independent news sites were blocked, and online activists were subjected to harassment and intimidation,” said Freedom House.

The government also cracked down on dissent, using the law to detain or charge activists who had expressed political viewpoints online.

Behind Cambodia was Myanmar, ranked 12th in Asia, just below the "partly free" threshold.

“The military and ruling party continued manipulating online content, while users were hesitant to discuss sensitive topics such as gender, the mostly Muslim Rohingya ethnic group, or conflicts in Rakhine, Shan, and Kachin states,” the entry on Myanmar said.

“Worryingly, some individuals who criticized the government online faced prosecutions and even prison time under a range of laws, including the repressive Telecommunications Law,” it added.

During the coverage period of Freedom House’s study, Myanmar’s government did not restrict connectivity in the country, but the NGO pointed out that in June 2019, the government turned off the internet in parts of Rakhine and Chin States, affection more than a million users. As of October 2019 the restrictions were still in place, leaving 600,000 without access.

Vietnam, 15th in Asia, still had restrictions on internet freedom and the online spaces for activism and dissent became more limited.

“Despite widespread protests, the enactment of a draconian cybersecurity law led to more restrictions on the internet by giving the government greater surveillance and censorship powers,” said Freedom House.

Additionally, the group cited long sentences for expressing opinions online, suspensions of online media, and an enforced disappearance. There was also a “record number” of content erasures in Vietnam over the reporting period.

The trend observed by the study was that internet freedom is declining in all regions of the world. Only four countries—Iceland, Estonia, Canada, and Germany—scored 80 or above, with the United States garnering a score of 77.