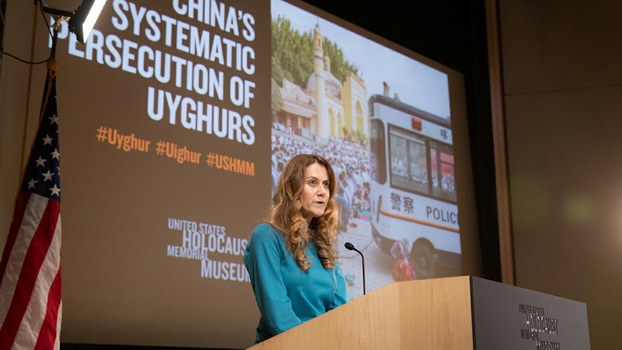 Naomi Kikoler, director of the Simon-Skjodt Center for the Prevention of Genocide, speaks at the US Holocaust Memorial Museum in Washington, March 5, 2020.

The Chinese government’s persecution of ethnic Uyghurs—including their mass detention in internment camps—constitutes “crimes against humanity,” according to the U.S. Holocaust Memorial Museum, opening an avenue for what one expert said could be legal action in an international court of law.

Speaking at an event on Thursday entitled “China’s Systematic Persecution of Uyghurs,” Naomi Kikoler, the director of the museum’s Simon-Skjodt Center for the Prevention of Genocide, said the situation in northwest China’s Xinjiang Uyghur Autonomous Region (XUAR) shows that “there are reasonable grounds to believe that China is responsible for crimes against humanity.”

“It is important to recall that crimes against humanity were born out of the experience of the Holocaust and first were prosecuted at Nuremberg,” she said, referring to the series of military tribunals held after World War II in 1945-46 by the Allied forces under international law and the laws of war.

Kikoler cited “terrifying” reports of political indoctrination, torture, forced labor, and even deaths in custody by former detainees of the XUAR’s vast network of internment camps, where as many as 1.8 million Uyghurs and other Muslim minorities accused of harboring “strong religious views” and “politically incorrect” ideas are believed to have been held since April 2017.

While Beijing initially denied the existence of internment camps in the XUAR, China last year changed tack and began describing the facilities as “boarding schools” that provide vocational training for Uyghurs, discourage radicalization, and help protect the country from terrorism.

But reporting by RFA’s Uyghur Service and other media outlets indicate that those in the camps are detained against their will and subjected to political indoctrination, routinely face rough treatment at the hands of their overseers, and endure poor diets and unhygienic conditions in the often overcrowded facilities.

“Perpetrators usually find some rationale for their crimes,” Kikoler said at Thursday’s event.

“In this case, the Chinese government claims to be fighting terrorism or eradicating poverty—but these are goals that cannot possibly be reached by the systematic persecution of the Uyghur population.”

Kikoler said that while shocking, such crimes “are not new,” noting that the Jews were also persecuted by Nazi Germany on the basis of their identity, and she warned against the kind of inaction that allowed an estimated six million Jews to be systematically murdered in the Holocaust.

“When we consider the scale of the problem we are discussing today, it is hard to think of quick solutions,” she said, adding that “there is always a role for each of us to play to shine a light on mass atrocities.”

“We need to press for the crimes against the Uyghurs to end, and recognize the courage of those—Uyghurs and others—who are fighting to make that a reality.”

Kikoler was joined by U.S. Representative Jim McGovern of Massachusetts who, along with U.S. Senator Marco Rubio of Florida, co-chairs the Congressional-Executive Commission on China (CECC)—a U.S. congressional advisory panel which in its annual report released earlier this year also suggested that Beijing’s policies in the XUAR may meet the definition of "crimes against humanity."

McGovern announced at Thursday’s event that he and Rubio plan to introduce legislation called the Uyghur Forced Labor Prevention Act, which would prohibit imports from the XUAR to the U.S., based on reports that China is gradually moving detainees out of internment camps and into factories where they are made to work for little or no wages.

A report earlier this week by the Australian Strategic Policy Institute said that some of the detainees are being forced to produce goods for global retailers such as Apple, BMW, The Gap, Nike, Samsung, Sony, and Volkswagen.

“We are introducing this bill for a simple reason: it’s the right thing to do,” McGovern said.

“No business should profit from or be complicit in forced labor and possibly crimes against humanity.”

McGovern said that many of the people he tells about what is happening in the XUAR are unaware of the situation there, and that they are “outraged that the Chinese government is committing these atrocities and they’re being allowed to get away with it.”

“If there is one lesson to be learned from the Holocaust, let it be that we must never, ever remain silent in moments of great injustice,” he said.

“There can be no doubt what the Chinese government is trying to do: stamp out the Uyghur identity.”

Also speaking at Thursday’s event, Sam Brownback, the U.S. Ambassador-at-Large for International Religious Freedom, called on Beijing to “immediately release all of those arbitrarily detained and to end the draconian policies that for more than two years have terrorized its own citizens in Xinjiang.”

“Those responsible for these abuses must be held to account,” he said.

“It is a fact that China has been committing crimes against humanity, including ethnic cleansing and cultural genocide, in East Turkestan against the Uyghur people,” he said, using Uyghurs’ preferred name for their homeland.

“We wholeheartedly welcome this designation and urge the international community to take necessary action for the protection of the Uyghur people.”

Isa’s comments followed a series of tweets by Adrian Zenz, a senior fellow in China Studies at the Washington-based Victims of Communism Memorial Foundation and one of the world’s foremost experts on mass incarcerations in the XUAR, calling the designation “a major step,” which “comes after careful legal vetting.”

“That means it is, at least theoretically, possible to bring this to an international legal body as a crime, such as the International Criminal Court in The Hague,” he said.

“What more apt venue to do so than at the Holocaust Museum's panel on the Systematic Persecution of the Uyghurs,” he wrote.

Last year, at the Ministerial to Advance Religious Freedom in Washington in July, U.S. Secretary of State Mike Pompeo called the internment camps in the XUAR “one of the worst human rights crises of our time” and “truly the stain of the century.”

Hundreds protest against Chinese oppression of Uyghurs. But why does China's oppression of Inner Mongolians remain hidden from public view?
https://www.buzzfeed.com/inside18acres/chinese-oppressions-in-inner-mongolia-7ql3lqpl9k

The CCP is waging a war against the Uighur people. They've put a 1 million or more Uighurs in detention camps & forcing them to love the Party & communism & to put down their Muslim religion. If the Uighurs were Jewish, there would be a world-wide outcry but the UN & other nations are ignoring this because these people are Muslims & China threatens retaliation against anyone who criticizes their policies in Xinjiang. Shameful!

Under what category should the elimination of Red Indians be labeled?

Let look back of Cambodian Killing Field back by China. I am a lone survivor of my family. My friends are not. Many families are wiped out. China still the same and stronger. Even China puppet still reign Cambodia.