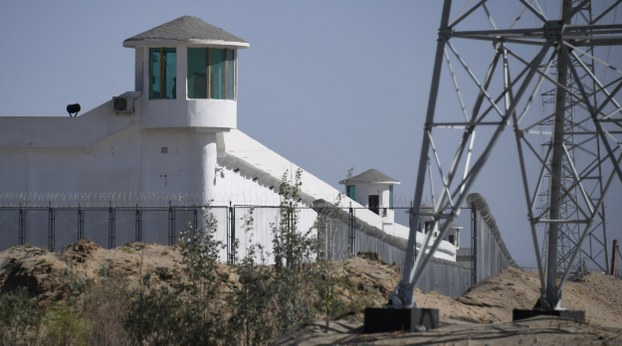 Guard towers are shown on a high-security facility near an internment camp in Xinjiang in a file photo.

Britain’s parliament on Wednesday opened an investigation into British business connections with China’s internment camps and use of forced labor in its Xinjiang Uyghur Autonomous Region, vowing to find ways to end British firms’ support of repression in the region, media and other sources said.

The enquiry, launched by the Foreign Affairs Committee of the House of Commons, will also look for ways to strengthen atrocity-prevention mechanisms of Britain’s Foreign, Commonwealth and Development Office and to support ethnic Uyghurs driven into exile, sources said.

The UK move follows calls by the European Union and the U.S. to investigate conditions in Beijing’s sprawling network of camps in the region, where authorities are believed to have held up to 1.8 million Uyghurs and other Muslim minorities since April 2017.

Washington and others are also taking measures to block imports of suspect goods and to sanction and hold to account Chinese officials responsible for human rights violations in the XUAR.

China’s treatment of its mostly Muslim ethnic Uyghur community “utterly abhorrent,” Layla Moran—foreign affairs spokeswoman for Parliament’s Liberal Democrats—said in a Sept. 16 statement, adding that the UK government now has a duty to act and impose sanctions to help stop the abuses.

A Sept. 8 letter to China’s ambassador to the UK signed by 135 members of parliament had already signaled British lawmakers’ “extreme concern” over the situation in the XUAR, where authorities are believed to have held up to 1.8 million Uyghurs and other Muslim minorities in a vast network of internment camps since April 2017.

China has sought to justify its network of camps as voluntary “vocational centers” despite reporting by RFA which has found that detainees are mostly held against their will in poor conditions, where they are forced to endure inhumane treatment and political indoctrination.

“The UK has not done nearly enough,” Moran added in a Sept. 15 opinion piece in Britain’s newspaper The Times. “How any [government minister can watch the videos from the Xinjiang camps and decide that a course of relative inaction is beyond me.”

“It is time the UK worked to regain our status as a country that defends and promotes human rights internationally,” Moran said.

“The mass detention of Uighurs in Xinjiang has horrifying echoes of the 1930s,” said Conservative Party member and investigating committee chair Tom Tugendhat, quoted on Sept. 16 in the Hindustan Times. “There have been similar atrocities since, and each time the world has promised to never allow such violations to happen again.”

“And yet, we now have clear, undeniable evidence of the persecution of more than one million people in these so-called re-education camps,” Tugendhat said, adding that his committee will look into ways the government can use to discourage private businesses in Britain from contributing to Beijing’s abuses in Xinjiang.

The European Union on Monday called on China to allow independent observers to visit the XUAR to investigate China’s treatment of the Uyghurs, while in Washington the Trump administration announced new customs actions to block imports of Chinese products believed to be produced with forced labor.

The Withhold Release Orders, measures intended to prevent goods suspected to have been made with forced labor from entering the United States, targeted three entities from Xinjiang and one from Anhui province in eastern China.

Meanwhile, calls are growing in the U.S. for a boycott of Disney’s $200 million live-action film “Mulan,” shot partly in Xinjiang’s ancient Silk Road City of Turpan, with rights groups and others citing the new film’s links to entities responsible for repressing Uyghurs in the XUAR.