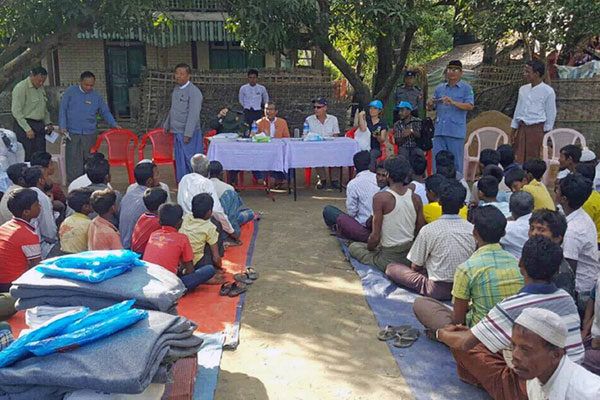 A third Muslim man whom the Myanmar government said had worked closely with local administrative officials in restive northern Rakhine state has been found dead in violence-ridden Maungdaw township, the State Counselor’s Office announced on Wednesday.

Authorities are investigating the murder of the man who was a former ward administrator in Badakar village and had been working with local authorities on regional development activities, the announcement said.

The death is the third to have occurred in the past week of local Muslims who are said to have collaborated with authorities as they continue to try to round up “militants” who raided three border guard stations on Oct. 9 and killed nine officers.

The body of the man, identified as Sirazuhut from Wet Kyein village in northern Rakhine, was reportedly found Monday near a creek that runs between Wat Kyien and Badakar in Maungdaw—an area inhabited primarily by Myanmar’s stateless Rohingya Muslim minority—according to Myanmar media reports. He had been missing since Dec. 16.

The government has blamed the October attacks and subsequent violence in the area on Rohingya insurgents who received training and financial support from Islamists abroad.

Myanmar’s foreign affairs ministry has said that about 50,000 Rohingya have fled the region to adjacent Bangladesh during a security crackdown following the border post attacks. Some of them have accused soldiers of murder, rape, torture and arson.

On Sunday, a Muslim man named Rawphi, a 28-year-old administrator in Yedwingyun village, was found dead with knife wounds.

The State Counselor’s Office said the following day that the victim had been working with security forces in administrative duties, the online journal The Irrawaddy reported.

On Dec. 22, the decapitated body of Shuna Mya, a Muslim man from Ngakhura village, where one of the attacks on three area border guard stations took place, was found floating in a river on Dec. 22, a day after he had spoken with reporters who visited the area.

A statement issued by the State Counselor's Office on Facebook the next day said Shuna Mya had been killed after he told the media that the government army had committed no acts of rape or arson and did not make arbitrary arrests. No arrests have been made in the case.

In the meantime, majority-Muslim Indonesia sent 10 shipping containers of food, baby food, and clothes for Rohingya affected by the violence in northern Rakhine state, according to a report in The Nation.

A Malaysian Muslim organization plans to send an “aid flotilla” to Rakhine on Jan. 10 with nearly 200 metric tons of rice, medical aid, and essential supplies for Rohingya communities in northern Rakhine, despite a warning by the Myanmar government on Wednesday that it will turn back the boats if official permission to enter the country is not obtained.

The two predominantly Muslim countries called on Aung San Suu Kyi, Myanmar’s de facto leader, to allow unimpeded humanitarian access to the areas affected by violence when they and other member states of the Association of Southeast Asian Nations (ASEAN) met with her on Dec. 19 to discuss the crisis in northern Rakhine.