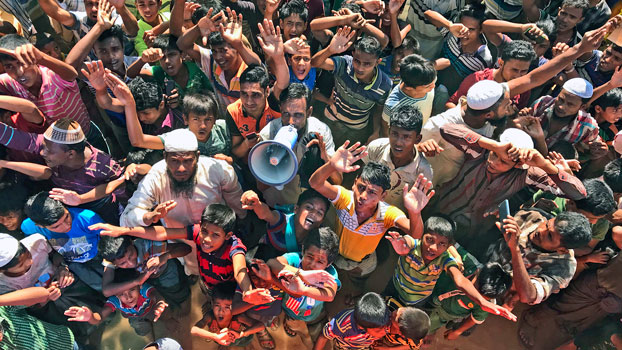 International rights groups on Wednesday called on Myanmar and Bangladesh to suspend their second attempt to repatriate some of the hundreds of thousands of Rohingya Muslim refugees who fled a brutal military campaign in 2017, until the members of the minority group are guaranteed a safe and voluntary return and are granted full citizenship and other basic rights.

The call comes days before the second anniversary of the Aug. 25 crackdown on Rohingya communities in northern Rakhine state that drove more than 740,000 across the border to Bangladesh. Those who failed to get out were killed, tortured, or raped, and saw their villages torched.

“Myanmar has yet to address the systematic persecution and violence against the Rohingya, so refugees have every reason to fear for their safety if they return,” Meenakshi Ganguly, South Asia director of Human Rights Watch (HRW), said in a statement.

On Thursday, the two countries plan to begin returning about 3,450 Rohingya cleared from a list of more than 22,000 provided by Bangladesh.

Reuters news agency reported that the United Nations’ refugee agency (UNHCR) and Bangladeshi authorities on Tuesday had started to consult more than 3,000 Rohingya refugees from Myanmar to determine if any wanted to return home.

“The intentions surveys are beginning today,” Louise Donovan, a UNHCR spokeswoman in the Cox’s Bazar district of Bangladesh, told Reuters.

“Together, the government of Bangladesh and UNHCR will ask these refugees to come forward and discuss the option of repatriation,” Donovan added.

Most Rohingya are apprehensive about returning to Myanmar, where they are considered illegal immigrants from Bangladesh and subjected to systematic discrimination, including denials of citizenship and access to basic services.

They have called on the government to grant them full citizenship status along with other basic rights, and to ensure their safety in the Buddhist-majority country before they decide to return under a repatriation agreement that Myanmar and Bangladesh signed in November 2017.

“Many Rohingya have said that they would like to return to Myanmar so long as they don’t suffer the same abuse, indignities, and atrocities they have endured in the past,” Ganguly said. “Bangladesh should not join this dangerous rush to send refugees back to conditions that they may be forced to flee again.”

The Burmese Rohingya Organisation UK said the Myanmar government has taken no steps to ensure that returning Rohingya will not continue to face violence and discrimination.

“The international community keeps saying that there must be a safe, voluntary and dignified return, but are doing nothing to pressure [Myanmar State Counselor] Aung San Suu Kyi to make that a reality,” said Tun Khin, the organization's president, in a statement

“Safe, voluntary, and dignified return means full citizenship, an end to discrimination, and justice and accountability, such as referring Burma to the International Criminal Court,” he said, using the country’s other name.

A previous attempt to repatriate a small number of Rohingya who had been approved by Myanmar and were deemed not to be involved in deadly attacks by a Rohingya militant group that prompted the 2017 crackdown failed when no one showed up at the border to be processed.

Nearly a year ago, a U.N.-mandated independent fact-finding mission that investigated atrocities committed against the Rohingya called for the prosecution of Myanmar’s top military commanders on charges of genocide, war crimes, and crimes against humanity at the International Criminal Court.

Myanmar, which has defended the brutal crackdown as a counterinsurgency against Rohingya militants, rejected the report.

The skinny and agressive Rohingya are more than happy in the refugees camps to enjoy the donation and aids, they don't need to work.