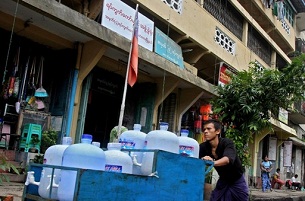 A delivery man walks past an Election Commission office in downtown Rangoon (Yangon) on August 13, 2010.
AFP

A group of ten small democratic parties met with Burma’s Election Commission Chairman to discuss a proposal to change the country’s electoral system to one of proportional representation, a representative from the group said Friday.

The meeting came the same day as the International Crisis Group, a Brussels-based think tank, said in a new report that proportional representation could help the country avoid conflict with ethnic minorities.

In their meeting with Election Commission Chairman Tin Aye in Naypyidaw, the 10 parties of the Democratic and Ethnic Alliance discussed the weaknesses of Burma’s current voting system that favors dominant parties, Thu Wai, chairman of the Democratic Party told RFA.

The group has proposed that a proportional voting system, which would allow independent and minority parties to win seats in parliament more easily, replace the current “first-past-the-post” system, under which candidates need only a simple majority to win a constituency.

"We were invited by the Election Commission Chairman Tin Aye and had a discussion for three hours today … on our proposal on proportional representation that we sent to him on July 13,” Thu Wai said.

“The Election Commission Chairman said he will submit the proposal to parliament to be discussed and approved. But we have to work harder [on it].”

The alliance argued in their proposal to Tin Aye that under the current structure, the will of the people is not fully represented and, in a worst-case scenario, it would be possible for the multiparty system to be replaced by an elected dictatorship.

“It was a good discussion as we discussed the details back and forth. Everybody likes this system, and the result of this discussion was good,” Thu Wai said.

While some of the parties have no seats in Burma’s parliament, which is dominated by the military-backed Union Solidarity and Development Party, most have a least a few.

The opposition in Burma’s parliament is led by democracy icon Aung San Suu Kyi’s National League for Democracy (NLD), which has held about 7 percent of the seats in parliament since a historic by-election in April.

Their meeting came the same day as a new report on Burma’s political reforms by the International Crisis Group (ICG) said proportional representation could help Burma remain stable during its political transition toward democracy, particularly by allowing more representation to ethnic minorities.

“Countries in transition often reform their electoral system,” the group said, in the report.

“Consideration should be given to the possibility that Myanmar [Burma] would be better served during the transition by a system with greater proportional representation.”

ICG warned that in the next election in 2015, an overwhelming win by Aung San Suu Kyi’s party could push ethnic minority parties aside, jeopardizing the ceasefires currently being negotiated with ethnic groups in the country’s border regions.

Fighting with armed ethnic rebel groups is ongoing in northern Burma’s Kachin state, despite efforts to negotiate a truce as the government is in the process of doing with Chin, Karen, Karenni, and other groups.

“The deal that is being presented to the ethnic armed groups is to give up armed struggle in return for the possibility to pursue their objectives through the political system,” ICG said.

“If an NLD landslide comes at the expense of minority ethnic representationt—as the results of the recent by-elections and the 1990 elections suggest it well mightt—those deals might start to unravel.”

It added that in Burma’s post-independence era, there had been considerable disaffection among ethnic minorities that the plurality voting system favored large Burman parties.

Aung San Suu Kyi made ethnic minorities the focus of her first address to Burma's parliament on Wednesday, calling for greater unity and better laws to protect their rights.

Reported by Ingjin Naing for RFA's Burmese service. Translated by Khin May Zaw. Written in English by Rachel Vandenbrink.