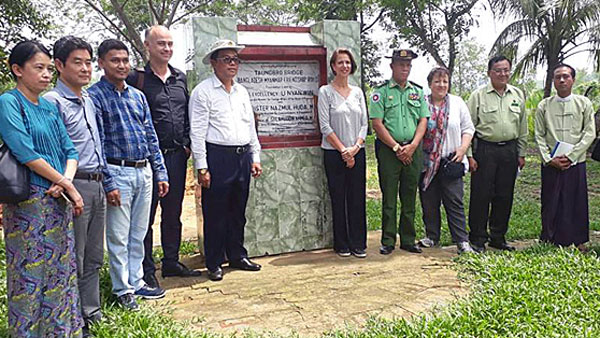 Christine Schraner Burgener, who was appointed to her post on April 26 by U.N. Secretary-General Antonio Guterres, is spending two days in western Myanmar’s Rakhine state.

On Monday, she visited the Taung Pyo Let Wae village repatriation center and the Hla Pho Khaung processing camp for Rohingya refugees who will return to Myanmar from Bangladesh to which they fled during the violence.

She is tasked with enhancing cooperation between the U.N. and Myanmar to address the crisis in Rakhine, help bridge differences in the ethnically and religiously divided state, and assist the Myanmar government with its peace process efforts.

Myanmar is in the process of repatriating Rohingya refugees who want to return to Rakhine state after fleeing the crackdown in response to deadly attacks on police posts by a Muslim militant group.

Myanmar has denied credible evidence by rights groups and the U.N. which indicates that security forces committed widespread atrocities against Rohingya civilians, including indiscriminate killings, rape, torture, and arson. The U.N. has said that the campaign amounted to ethnic cleansing.

The government has defended the campaign as a counterinsurgency operation against the Arakan Rohingya Salvation Army, the group that carried out the attacks on police outposts in August 2017 and smaller-scale attacks on border guard stations October 2016.

More than 1,000 people in Maungdaw and two other townships in northern Rakhine died during the larger crackdown, and nearly 700,000 Rohingya fled their homes and sought shelter in displacement camps in southeastern Bangladesh. The earlier October 2016 “security operation” drove roughly 90,000 Rohingya to Bangladesh.

When Tun Aung Kyaw — general secretary of Arakan National Party (ANP), the dominant political party in Rakhine state that represents the interests of ethnic Rakhine Buddhists — met Burgener, he disputed the reported number of Rohingya who fled the area during the violence.

He said that Rakhine state's 13 townships had a population of about one million people, including both ethnic Rakhines and Rohingya, before the exodus, and that Muslim-majority Maungdaw and neighboring Buthidaung township together had about 700,000 residents.

Shwe Maung, leader of the Thetkepyin internally displaced persons (IDP) camp for Rohingya in Sittwe, said he told Burgener about the difficulties of those who live in the camp.

“The room we are in is just nine feet wide for six to eight people, including a son, daughter, daughter-in-law, and son-in-law,” he said. “When we were in our old places, we lived in our own houses and we could work to survive, but we can’t work here.”

The Rohingya, who are treated as illegal immigrants from Bangladesh, are denied citizenship and access to basic services such as health care, education, and jobs, though many have lived in Myanmar for generations.

About 1,000 households live at the Thetkepyin IDP camp and receive assistance from the World Food Programme, Shwe Maung said.

Myanmar is working on closing down IDP camps in Rakhine, where tens of thousands of Rohingya ended up after they were displaced by communal violence between Muslims and Buddhists in 2012.

Burgener also visited Kyein Chaung and Pandaw Pyin villages and met with the relatives of Hindus and Muslims who were killed during the upheaval in the multiethnic region.

“Almost all houses [here] were burned down during the crisis, and people moved out of the village, but 22 households didn’t move out,” said Annawa, the head of Pandaw Pyin village. “The government built houses for these 22 households. The special envoy visited [the ones] inside this village.”

RFA’s Myanmar Service was unable to reach Nyi Pu to ask him about their meeting.

Myanmar has accused other U.N. officials of being biased in their assessments of the Rohingya crisis.

A statement issued by Aung San Suu Kyi’s office on June 13 said the state counselor “stressed the need for the special envoy to try to get to know the ground situation and its complexities in an objective manner and to stand up for the truth and convey the real situation to the international community.”

Also on Monday, Zeid Ra'ad al-Hussein, the U.N.’s human rights chief, said in his final global update to the Human Rights Council that widespread violations have continued against the Rohingya with “clear indications of well-organized, widespread and systematic attacks ... amounting possibly to acts of genocide.”

A U.N.-appointed fact-finding mission, representatives from the U.N.’s Office of the United Nations High Commissioner for Human Rights, and the special rapporteur on human rights in Myanmar — all of whom the government has refused to let into the country to probe the Rohingya crisis — have conducted remote monitoring of the situation, he said.

Zeid referred to a memorandum of understanding that Myanmar signed on June 6 with the U.N.’s development and refugee agencies to assist with the repatriations of the Rohingya, saying, “I reiterate that no repatriation should occur in the absence of sustained human rights monitoring on the ground, in the areas concerned.”

In March, Zeid asked the U.N. General Assembly to refer those who committed atrocities against the Rohingya to the International Criminal Court (ICC) for prosecution and called on the Myanmar government to allow independent investigators into northern Rakhine to probe suspected acts of genocide against the Muslim group.