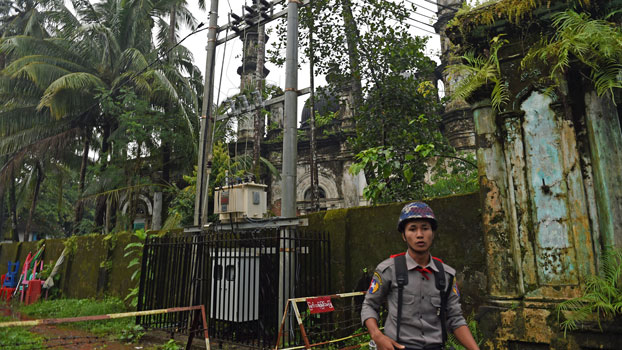 A policeman patrols the grounds of the run-down Jama mosque, a center of Islamic worship built in 1859 and permanently closed in 2012 following deadly clashes between Muslims and Buddhists, in Sittwe, capital of western Myanmar's Rakhine state, Sept. 7, 2016.
AFP

Muslim leaders from all states and regions of Myanmar are forming a temporary committee to press the civilian-led government to reopen shuttered mosques across the country, most of which were closed down in the wake of 2012 communal violence between Buddhist and Muslim communities in Rakhine state, a spokesman for the body said Monday.

The committee has a growing list of more than 40 mosques shut down in 10 of the country’s states and regions, said committee representative Maung Maung Myint.

“We are making a list of mosques that were shut down across the country,” he told RFA’s Myanmar Service. “Next, we will form a committee. This committee will make an appeal to state leaders to reopen these mosques.”

Most of the structures were shut down following riots in western Myanmar’s multicultural Rakhine state more than seven years ago, he said.

The violence left more than 200 people dead and tens of thousands of Rohingya Muslims displaced. The Rohingya were moved into permanent displacement camps in the state, where they still live and are deprived of citizenship, basic rights, and access to services.

Other factors prompted the closure of mosques in Mandalay region, especially in Meiktila and Yamethin townships, Maung Maung Myint said. While most mosques were closed due to inter-ethnic and religious conflicts, others were destroyed during social clashes in neighborhoods, he said.

“These mosques were shut down unnecessarily in the first place,” said Wunna Shwe, joint-secretary of the Islamic Religious Affairs Council Myanmar. “Now that there is stability in the country, they need to be reopened as soon as possible.”

“As a religious organization, we have sent written appeals repeatedly,” he said. “The local Muslims in these regions face lots of challenges for their daily prayers. This is an urgent issue.”

Kyaw Hla Aung, a resident of Rakhine state’s capital Sittwe, said the current list, which does not include structures shuttered in areas where most of the inter-ethnic and religious conflicts occurred, could grow to more than 100 mosques across the country.

More than 20 mosques were closed in Sittwe alone following the 2012 riots, he added.

A list of structures from the General Administration Department indicates that there are over 800 mosques in northern Rakhine’s Maungdaw township, more than 400 in Buthidaung township, and 10 in Rathedaung township — areas where many Rohingya Muslims lived prior to a military-led crackdown in 2017 that left thousands dead and drove more than 740,000 across the border to Bangladesh.

It is unknown how many of the mosques in the three townships had been shut down or destroyed.

Myo Nyunt, spokesman for the ruling National League for Democracy (NLD) government, said that the administration would make the most suitable decision considering everyone’s concern when deciding whether to reopen mosques nationwide in the Buddhist-majority country.

“We don’t want to blame anybody or any organization,” he said.

‘Still happening under the NLD’

Some individual townships have undertaken efforts to reopen their mosques, but the move to create the commission is the first attempt to address shuttered religious buildings nationwide.

Muslims, who comprise four percent of Myanmar’s estimated population of 54 million people, have not had proper places to pray with the closures of their community mosques, Maung Maung Myint said.

When discrimination against Muslims occurred during the former military-backed government in the Buddhist-majority nation, authorities failed to protect Muslim communities and prevent the destruction of their places of worship, said committee member Kyaw Nay Min.

Since 2016, riots and other violence targeting Muslims have occurred each year during which the current civilian-led NLD government has been in power, Kyaw Nay Min said.

“The attacks on mosques and interethnic and religious conflicts have erupted since the previous government of [former president] Thein Sein,” he said.

“It has been known that there were some perpetrators pulling the strings from behind and that they have never been exposed,” he said. “I will say, frankly, that this is still happening under the NLD government. In fact, it was crucial that authorities effectively prevent these riots, but they didn’t,” he said.

The worst of the attacks occurred during the brutal clampdown on Rohingya communities in northern Rakhine state that began in August 2017.

Also during that year, authorities in Yangon closed down two madrassas in Thaketa township under pressure from Buddhist nationalists who accused Muslims of using the schools for prayer services, and one in Taikkyi township that had been rebuilt without permission years after the original structure was torched during communal violence.

Then in 2018, some township offices the General Administration Department ordered that mosques and madrassas use only the Burmeselanguage and that religious services and classes be held only in permitted places.

“I should say the NLD government is not capable of protecting minorities,” Kyaw Nay Min said.

He also noted that the government’s lack of regard for Muslims might not bode well for any hope of reelection in the next general election in late 2020 if the administration does not reverse course.

“The ruling party would surely want to garner votes from minority groups,” Kyaw Nay Min said. “And we, the minority, also must reconsider our position and whether the ruling government is capable of protecting us or not.” 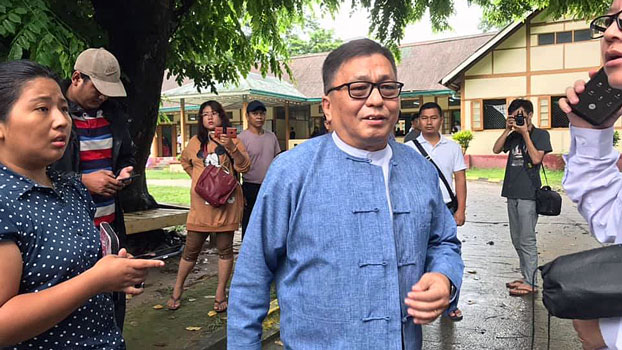 Ethnic Kachin community leader Tan Guan said the formation of the committee was a result of an informal meeting in July between Reverend Hkalam Samson, president of the Kachin Baptist Convention (KBC), and U.S. President Donald Trump to briefly discuss religious persecution.

“I think this is the result of Dr. Hkalam Samson's statement [during the meeting] that there is no religious freedom in the country,” he said.

The Myanmar military filed a defamation lawsuit against the KBC leader for comments he made to Trump about human rights violations by soldiers in the Southeast Asian, but dropped it in early September.

The KBC is an evangelical Christian organization that operates in northern Myanmar’s Kachin state and helps civilians displaced by fighting between the Kachin Independence Army (KIA) and Myanmar forces.

“It’s true that we haven’t done the job done well by democratic standards,” he said.

“As you know, there have also been attacks [on us] led by religious extremists, but we have done our very best within the limitations of our authority,” he added, referring to deadly armed assaults on police outposts in northern Rakhine state by a Rohingya militant group, which sparked the 2017 military-led crackdown.

Though the reopening of the mosques is the concern of the Ministry of Religious Affairs, it largely depends on the decision of Myanmar military commander-in-chief Senior General Min Aung Hlaing and the ruling government.