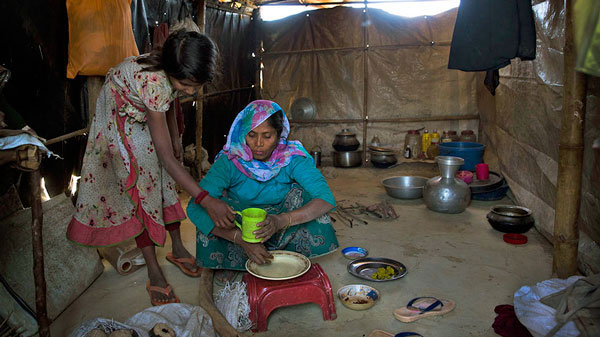 Myanmar’s military opened a rare court-martial Tuesday at a military base in northern Rakhine state to try soldiers accused of committing atrocities during the 2017 military-led crackdown on Rohingya Muslims, an army spokesman said.

The Associated Press reported in February that hundreds of bodies burned with acid had been found in five mass graves near Buthidaung township’s Gu Dar Pyin village.

At the time, the Myanmar government rejected the report, saying an investigation had found no evidence to support claims of the killings and the mass graves.

Major General Myat Kyaw led a probe of the incident and found that the soldiers did not fully comply with military instructions and rules of engagement, said military spokesman Brigadier General Zaw Min Tun.

In September, however, Zaw Min Tun told the online journal The Irrawaddy that the resulting court-martial proceedings were initiated over a clash between government soldiers and the Arakan Rohingya Salvation Army, a Muslim militant group, near Gu Dar Pyin village two years ago.

Family members of the accused were allowed to attend Tuesday’s court proceedings at the Buthidaung army base, which were open to the public, though Zaw Min Tun said there might be limitations on account of instability in the region.

Military law mandates that court-martial hearings are opened to the public, except in cases ordered to be tried in secrecy, he added.

Local lawmakers, however, told RFA’s Myanmar Service that they were not aware that the hearing was open to the public.

Zaw Min Tun also said that the court-martial was being held in a transparent manner.

“We are holding the court-martial hearing as an ‘open court,’” he said. “We are doing this in a transparent way at our regional battalion.”

“We’ve always said that we will release announcements on details of the sentences once the trial has been completed,” he said. “We will announce who is responsible for which charges and the sentences they are given.”

Kyee Myint, chairman of the Union Attorney and Legal Aid Association, said he expects sentences for those convicted of killings in the Gu Dar Pyin village case to be longer than those in the Inn Din village case.

In March 2018, a military court sentenced four officers and three soldiers to 10-year prison sentences for the indiscriminate killing of 10 Rohingya men and boys in Maungdaw township’s Inn Din village amid the larger crackdown on the Rohingya that left thousands dead and drove more than 740,000 out of the country.

But in November of that year, the convicts were pardoned by Myanmar’s military commander-in-chief and released.

“The convicts from the Inn Din village case were in prison for only nine months,” Kyee Myint said. “It outraged the international community.”

“Observing that condition, I think they will take stronger actions and punishments in this case,” he said.

Kyee Myint also said Myanmar soldiers would likely think twice before committing any atrocities against civilians again, given the immense international outcry for Myanmar and its army to be held accountable for their actions during the crackdown.

“To be clear, I think they won’t be too brazen to do the same thing again because this time, the hearing is occurring amid international pressure,” he said. “The bodies of the victims were found, and the killings had occurred for sure.”

The Gu Dar Pyin village case comes at a time when Myanmar faces impending legal action on genocide charges for alleged atrocities committed against the Rohingya at the International Court of Justice, the International Criminal Court, and an Argentine federal district court.

Some observers said the military must ensure that the court-martial process is transparent in light of intense scrutiny by the international community.

Myanmar political analyst Yan Myo Thein called for transparency in the hearing and sentencing so that Myanmar can gain the credibility of the public and the international community.

“The entire court-martial proceeding on the Gu Dar Pyin massacre and the sentences should be as transparent as possible to the public and to the international community,” he said. “It is important to prove that the military is working to strengthen the rule of law in the country.”

Maung Maung Ohn, former chief minister of Rakhine state, said that the military has undertaken the right action against the accused soldiers in the case.

“They are trying to show that they are taking action in line with the legal framework,” he said.

“They are trying to show that by taking into account contrasting reports such as the killings of Hindus and Rakhines, the military is doing the right thing, and the government is also steering in the right direction,” he added.

But human rights activist Nickey Diamond from Fortify Rights said it will be difficult for the military to gain credibility.

“The military is taking action for the Gu Dar Pyin case at the same time as international pressure is growing,” he said. “It is just an attempt to show they are doing their job. But as I've noted, they will find it difficult to gain international credibility.”