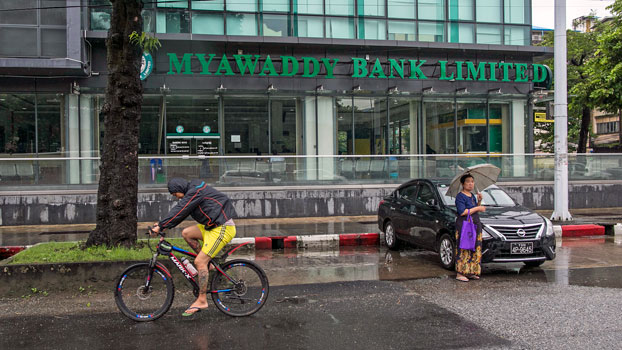 Myanmar’s armed forces on Thursday said a decision by money transfer company Western Union to cut ties to a military-owned bank over army atrocities against the Muslim Rohingya ethnic minority violates the rights of military families.

U.S.-based Western Union terminated its agent contract with Myawaddy Bank, becoming the latest foreign firm to sever connections to a military-operated company following calls by human rights groups to do so over alleged genocide and war crimes committed against Myanmar civilians.

A Western Union spokesperson said that in Myanmar and other countries where it provides services, the company uses local agents remunerated by a commission payment, and "conducts agent due diligence and oversight through periodic reviews to determine whether these agents satisfy relevant regulatory requirements and Western Union policies.

"As a result of such a review, Western Union has ended its contract with Myawaddy Bank, effective immediately," the spokesperson said in a statement.

Myawaddy Bank was founded in 1993 and has 65 branches in cities across Myanmar, including its head office. Profits from Myawaddy Bank benefit the military, rights groups say.

“This violates the rights of military families and deters their prosperity,” he said.

“Regardless, Western Union is only one international money transaction service,” he said. “If it is not available, we will work with someone who is available to us.”

Zaw Min Tun played down the effect that the decision would have on Myanmar, whose citizens abroad use the service to send remittances to family members at home. The service is also used by humanitarian aid groups to transfer funds to their local operations.

“There will be no big impact on the country,” he said. “These [military] banks have been operating before they started working with [Western Union].”

Zaw Min Tun said he didn’t know the current number of active armed forces members, but he put number of military veterans at between 250,000 and 300,000.

RFA could not reach officials at Myawaddy Bank or Bo Bo Ngae, vice chairman of Myanmar’s Central Bank, for comment.

Zaw Lin Htut, chief executive officer of Myanmar Payment Union, a union of private banks providing financial services in Myanmar, said Western Union’s withdrawal from Myawaddy Bank would not have an impact on the institution or its customers.

“The way Western Union works is that a customer can withdraw money in any bank via its service after receiving a code number from the sender,” he said. “There will not be any changes for customers or for Myawaddy Bank itself because it does not rely on profits from Western Union’s services.”

“The bank’s primary operations are loans and other business, so the decision will not affect it very much,” he said.

The international community has condemned the government military for human rights violations against ethnic minorities in Kachin and northern Shan states, where it engages in periodic clashes with rebel ethnic armies, and against Rohingya Muslims in Rakhine state, where it conducted a brutal targeted crackdown in 2017.

Burma Campaign UK and 32 other organizations issued a joint statement in October 2018 calling on Western Union to stop doing business with Myawaddy Bank.

“There are plenty of alternative nonmilitary companies in Burma that Western Union can use in Burma,” it said. “There is no justification for putting money into the pockets of Burma’s brutal military.”

A U.N.-appointed Independent International Fact-Finding Mission on Myanmar that probed military abuses has also encouraged international businesses not to sign contracts with companies owned by the armed forces or with those owned by relatives of military leaders.

“We welcome such a decision, as human rights activists and as Fortify Rights,” he told RFA. “This is a very praiseworthy action, but still not enough.”

“Serving the well-being of the military members and their family members should not be an excuse for committing human rights violations,” he said. “If the military keeps committing these acts, there will be more sanctions and companies cutting ties with its businesses.”