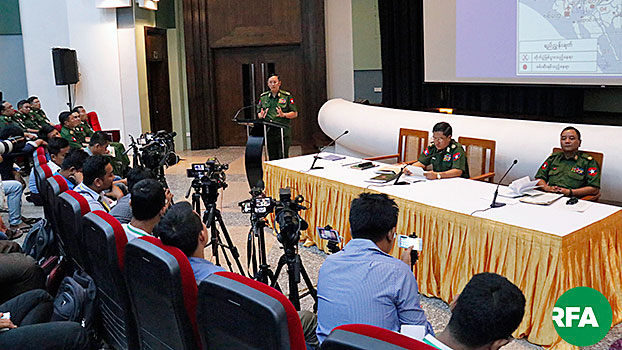 Myanmar military spokesmen address the media at a press conference in Myanmar’s capital Naypyidaw, accusing some news agencies of exaggerating reports and twisting facts in their stories about the armed services, June 22, 2019.
RFA

Myanmar’s powerful military has filed nearly 50 lawsuits against critical journalists, individuals, and organizations it has accused of defamation during the civilian-led government’s nearly four years in office, a freedom of expression advocacy group said Tuesday.

Among 96 people accused, 51 are activists, 19 are civilians, 14 are journalists, five are religious leaders, four are artists, and three are members of political parties.

“In most of the cases, the accused are activists,” Athan researcher Ye Wai Phyo Aung told RFA’s Myanmar Service. “The military’s lawsuits mostly try to limit the free speech.”

Myanmar forces have come under heavy fire by the international community for their campaign of violence against Rohingya Muslims in northern Rakhine state in 2017. The crackdown, which included indiscriminate killings, mass rape, torture and village burnings, left thousands dead and drove more than 740,000 members of the minority group out of the country.

A few nations, including the United States, have imposed targeted sanctions on army commanders deemed responsible for the slaughter, while other countries have filed lawsuits on genocide charges against Myanmar for alleged state-sanctioned violence against the Rohingya at the International Court of Justice (ICJ) and the International Criminal Court and in an Argentine court.

“Our observations indicate that the military has become ultrasensitive to any criticism against it as it is experiencing a political crisis and is responding to critics by filing lawsuits against them,” Ye Wai Phyo Aung said.

When Nobel Peace Prize laureate Aung San Suu Kyi appeared before judges during an ICJ hearing in December, she denied that the violence meted out against Rohingya was done with genocidal intent and insisted it was part of a military clearing operation to rid the region of Muslim insurgents.

“We find that the military is intolerant when it comes to the Rakhine issue,” Ye Wai Phyo Aung said. “They don’t want the public to learn the truth about what happened on the ground in Rakhine state.”

“They don’t like it that the free press is publishing the up-to-date news, so they have prosecuted a bunch of news media for reporting on Rakhine state,” he said, noting military lawsuits filed against RFA, the online journal The Irrawaddy, and the Rakhine-based Development Media Group (DMG) news service.

“In addition to the prosecutions, they have also made verbal and physical threats,” he said.

“Especially in 2019, there were occasions like the ICJ lawsuit and growing calls to speed up constitutional amendments,” he said.

“Since we are an institution, we will definitely have to prosecute any unfair criticism and distortions about us,” he told RFA.

“We are not prosecuting all the news media,” he said. “Our lawsuits based on the acts of the accused. We only prosecute parties who deliberately defame us to damage our reputation.”

Zaw Min Tun noted that government officials and lawmakers have filed more defamation lawsuits than has the military.

Two-year-old Athan publishes periodic reports on the state of media freedom in Myanmar under the NLD that point to a growing number of threats to freedom of expression since the party came to power after winning landslide elections in 2015.

When lawsuits are filed by that evil army men, the judgements come from Min Aung Hlaing and the presiding Judge reads it with the sentences appended with that.
e.g. Nay Myo Zin, Wa Lone, Ko Htin Kyaw of MFC