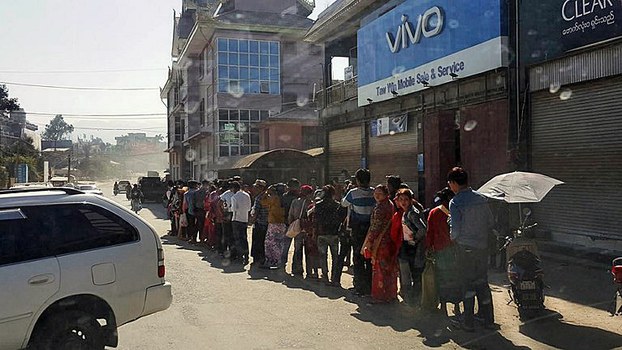 Myanmar residents wait at the border immigration crossing in the town of Muse in Myanmar's northern Shan state to cross into southwestern China's Yunnan province, Nov. 22, 2016.

Refugees from conflict in the northern part of Myanmar’s Shan state say they are worried that their land could be confiscated for Chinese-backed Belt and Road Initiative (BRI)-related infrastructure projects while they are unable to return because of fighting.

In 2011, armed conflict between Myanmar’s military and several insurgent groups in the area broke out in northern Shan. Fighting intensified in 2015 as the military began fighting with the Restoration Council of Shan State (RCSS).

The fighting has caused nearly 17,000 internally displaced persons (IDPs) to seek shelter in Namtu, Kutkai, Namhkam, and Mong Yawng townships, according to figures recorded by volunteer organizations. These IDPs are worried because they don’t have the proper legal documentation for lands that they consider to be ancestral.

Seng Tu, an IDP living in the Kutkai refugee camp and a member of the IDP farmland committee, told RFA’s Myanmar Service that fellow refugees are very concerned and want a freeze on the Chinese projects.

“The government is planning projects like reservoirs or agricultural zones on our land without our knowledge,” he said.

Nang Sai, a resident of the Namtu camp and a member of the IDP farmland committee, said that IDPs cannot simply return home.

“It’s not safe. We have several ancestral lands in the region, and we’re concerned that we might lose them. If that happens, we will lose our livelihoods,” she said.

Plans for a reservoir on the Nam Khai River in Kutkai township, along with agricultural and livestock zones in the area, were reported by the local media, but the government has made no official announcement about the projects.

The IDPs say that they believe the proposed projects haven’t yet begun construction because of the continued armed conflict in the region.

Authorities, however, recently held a consultation with local citizens about a plan to build a railway as part of China’s BRI.

Soe Nyunt Lwin, Shan state’s minister of finance and planning, told RFA why such a project would be ideal.

“Northern Shan state has the longest border with China. In the area, we have the Muse-Ruili and Chinshwehaw-Lijiang border crossings,” he said.

The minister added that in the future, the areas around those crossings will become commercial cities.

“We signed a union-level MoU [memorandum of understanding] with China last May for the implementation of these projects. China expects to turn the border gates with Myanmar into international entry gates,” he said.

But the fighting is having an effect on the plans.

“We are working very slowly due to the continued armed conflict, but northern Shan state has a lot of potential benefits from these border crossings,” he said.

The minister also said that China has requested permission to build a rail connection between Lijiang in southwest China;s Yunnan province and Lashio in Shan state. The planned route would also go through Chinshwehaw.

Upon hearing about these projects, the IDP farmland committee, consisting of IDP delegates from 36 camps in the region, released a statement with four demands on Wednesday.

They called for the non-implementation of any project on their ancestral land until they can return home, a promise not to designate their lands as vacant or forest, a stop to all projects that have already started, and a refrain from mining or logging activities on their lands.

They also demanded that the government recognize their ownership of ancestral farmland as mandated in Section 8 of National Land Use Policy.

Meanwhile in Kachin state’s Waingmaw and Hpakant townships, authorities arrested two Chinese citizens for "ill-mannered conduct" for posting signs in Chinese and driving a vehicle with a Chinese flag on it.

Local citizens in Kachin said the activities were disrespectful to the public, the state, and the state government.

The two Chinese citizens were charged with violating Section 4(1) and 13(1) of the Immigration Act and the National Symbols Limitation Act. They are being held at the Waingmaw and Hpakant police stations.

If convicted, the two could face prison sentences ranging from six months to five years and a cash fine of up to 1,500 kyats (U.S. $1)