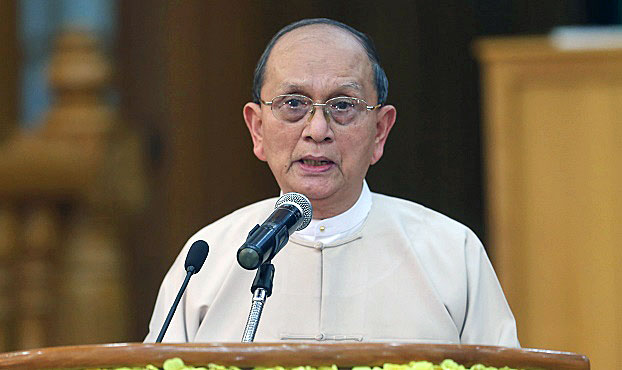 Myanmar’s former president Thein Sein has called for voters in 2020 elections to back candidates who will protect the military and the county from “neocolonialism” in the name of human rights, drawing harsh criticism from political observers and rights activists.

Thein Sein, who served as president from 2011 to 2016 under the military-backed Union Solidarity and Development Party (USDP) and is credited with paving the way for a civilian-led government, made the comments on Jan. 5 at the party’s headquarters in the capital Naypyidaw.

In a speech on the current situation in Myanmar, the 74-year-old retired army general also listed qualities that the electorate should look for in candidates running for election.

After calling 2019 a year “filled with terror” in the form of abductions, thefts, murders, robberies, and rapes, Thein Sein warned that the country faces the danger of neocolonialism from foreign critics of Myanmar military atrocities against ethnic minorities.

“Because of this neocolonialism, our country is at risk of expansionism by foreigners who use ideologies like democracy and human rights to promote their agenda,” he said during the speech.

“It is common knowledge that they are using all kinds of tactics to carve out our sovereign territories, to swallow up our race and majority religion, and to paralyze the military which has been defending the country,” he said and appealed for voters to support pro-army parties and candidates in general elections at the end of 2020.

As president, Thein Sein implemented a series of reforms to push Myanmar towards democracy, including ending media censorship and freeing political prisoners from jail, though the changes lost steam late in his administration.

Myanmar has come under heavy criticism by the international community over the military’s mistreatment of ethnic minorities in the country’s far-flung regions, especially in Rakhine state where soldiers brutally attacked Rohingya Muslim communities in 2017. The country and its civilian and military leaders are facing legal action on genocide charges in three international courts.

“He should not blame a single entity for all the problems, but rather recognize them as an outcome of misconduct by successive governments,” he added.

Sai Nyunt Lwin called the former president’s comments “biased” and said that politicians should do whatever is in the best interest of Myanmar citizens, regardless of western or eastern ideologies.

“We should avoid the blame game,” he said.

“But we should think through who we should be more cautious about — the ones closer or those farther away,” he said.

Words of a dictator

Activist Nickey Diamond from the Southeast Asia-based group Fortify Rights said Thein Sein’s words were those of a dictator.

“In U [honorific] Thein Sein’s speech, he accused foreign countries of using democracy and human rights to promote neocolonialism,” he said. “These are the words of dictators.”

“He tried to use colonialism, which is universally viewed negatively, to distract the people away from these values, saying they are a product of Western countries,” he said. “In fact, dictators always fear ideologies like democracy and human rights.”

Diamond went on to say that it was “no surprise” that the former military general wanted to disgrace the concepts of democracy and human rights.

“Now as we all are trying to nurture the young democracy, these former generals are trying to interrupt. This shows their true color,” he said.

“He is just carrying out his mission, not necessarily working for the benefit of the people,” he said. “They might as well take power back and protect their interests.”

“People will never forget what they have been through, so I think they will just consider this speech a joke,” he said, adding that such words by former generals are nothing new and that their main focus now is protecting the wealth they have amassed through corruption.

Politician Nyan Win, who serves on the Central Executive Committee of the ruling National League for Democracy (NLD) and is Myanmar leader Aung San Suu Kyi’s personal attorney, suggested that Thein Sein’s speech is an indication of an attempted political comeback.

“In one word, he was campaigning for the election,” he said. “So far, no one has been allowed to campaign. We haven’t received an announcement from the Union Election Commission yet about the election, so it is illegal to begin campaigning now. ”