More Than 2,200 Rohingya Caught Trying to Leave Myanmar by Sea Since 2015: Detainee List 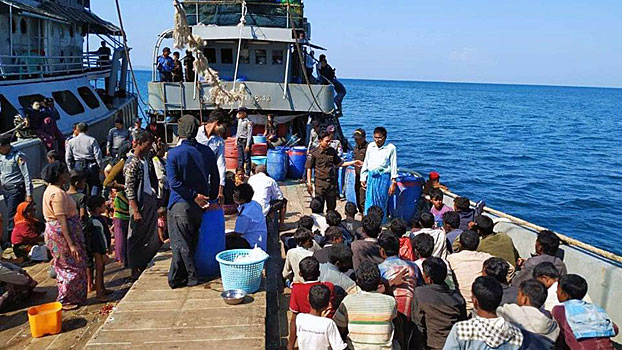 Myanmar authorities have apprehended more than 2,200 Rohingya Muslims as they attempted to illegally leave the country by sea since 2015, according to a list of the detainees obtained from a naval officer by RFA’s Myanmar Service.

Nearly 1,500 Rohingya were detained in 2015, more than 500 were picked up in 2018, and roughly 250 have been apprehended so far in 2019, according to the list provided by the officer, who declined to be named because he is not authorized to give information to the media.

The figures do not include Rohingya who fled by land from two military-led crackdowns in northern Rakhine state in 2016 and 2017. During the first round of violence, about 90,000 Muslims left and headed across the border and into Bangladesh, while the second more brutal clampdown forced more than 740,000 out of their villages and into Myanmar's neighboring country.

Thousands of other Rohingya have tried to leave Myanmar in the last several years to escape institutionalized persecution, grinding poverty, and insecurity in Rakhine state. They have paid human traffickers hundreds of dollars each to transport them to other Muslim-friendly nations in Southeast Asia where they hoped to have a better life.

But because of restrictions on their freedom of movement, the Rohingya cannot freely travel inside or outside Myanmar without first obtaining official permission. Those who decide to travel illegally usually do not take identification cards with them, which all Myanmar residents must carry.

A group of nearly 70 Rohingya who had fled Rakhine state with the help of traffickers and headed to Malaysia were arrested in Yangon region’s Hlegu township on Feb. 20-21. They are now on trial for violating Myanmar’s nationality statutes for traveling illegally and without documentation.

On Feb. 14, authorities picked up 19 Rohingya, including four children, in Magway region’s Minhla township. The children were taken to a youth training center in Mandalay, while the adults are now on trial for violating nationality statutes, said township immigration officer Aung Pyi Soe.

In a larger incident, the Myanmar Navy on Dec. 15 detained a vessel carrying 174 Rohingya in waters off the country’s southern tip, west of Kawthaung town in the southern Tanintharyi region.

Instead of facing charges, the members of the group were transferred by boat to Rakhine state in early January, where immigration officials in the regional capital Sittwe determined their places of origin and sent them back to their villages and to internal displacement camps.

On Nov. 28, authorities arrested 96 Rohingya at sea off Pathein township in Myanmar’s Ayeyarwady region after they boarded a boat from Rakhine.

All the arrested Rohingya have been charged under Section 6(3) of Myanmar’s Immigration Act and face prison sentences of six months to two years if found guilty.

Rohingya rights activists have decried the arrests and trials, blaming the Myanmar government for failing to address the root causes of the illegal flight.

Tun Khin, president of the Burmese Rohingya Organisation UK, said the government must extend basic rights to the Rohingya, who are considered illegal immigrants from Bangladesh and denied full citizenship.

“If the Myanmar government gives us citizen rights, lets us live in our places [of origin] by rebuilding our houses, lets us travel in our country, and abolishes unfair laws that affect us, these flight cases can be reduced,” he said.

“Yes, the government can do it at any time, but it is not willing to do it,” he said. “We urge the government to do these things. We [also] want justice from the international community.”

Myanmar is the subject of a lawsuit file at the International Court of Justice by the small African nation Gambia, accusing the Southeast Asian country of violating the 1948 Genocide Convention during the alleged expulsion of more than 740,000 Rohingya to Bangladesh amid the 2017 crackdown.

The campaign of violence left thousands of Rohingya dead, while some of those who tried to flee were subject to torture, mass rape, and community burnings.

The government and security forces have defended the action as a counterinsurgency against a Muslim militant group in northern Rakhine. The military has pledged to prosecute soldiers who committed atrocities and so far has held three courts-martial.

Rohingya activist Thar Aye said it is preferable that authorities return the captured Rohingya to their places of origin rather than prosecute them, and that they should focus their efforts on charging traffickers.

“It is a good action,” he said. “Because they are not guilty, it is the right action to send them back to their places of origin.”

“After sending them back, authorities need to investigate and take action against the people and organizations involved in these human trafficking cases,” he added. “If they do this, there will be a decrease in the number of flight attempts in the future.”

But Nickey Diamond, a Myanmar human rights specialist with the Southeast Asia-based NGO Fortify Rights, disagreed, saying that Rohingyas who are caught and returned will likely leave again if their situation doesn’t change for the better.

“Even if they are sent back to their places of origin, they are going to flee again if they can’t survive,” he said. “And then, some will be arrested in Myanmar’s territorial waters, though others will make it to other countries.”

Reported and translated by Khet Mar for RFA’s Myanmar Service. Written in English by Roseanne Gerin.