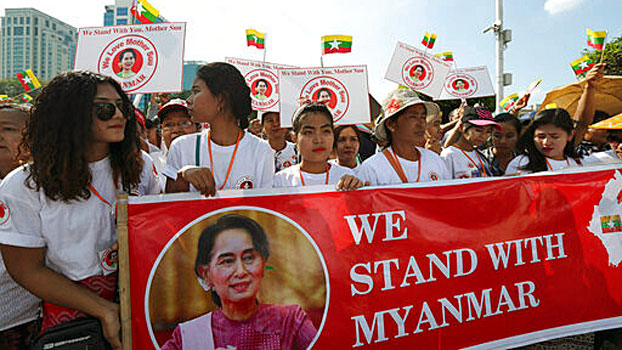 People attend a rally in Yangon to show support for Myanmar's leader Aung San Suu Kyi as she prepares to defend the country against genocide charges at the UN's top court, Dec. 1, 2019.
Associated Press

The looming Rohingya genocide case against Myanmar at the U.N.’s top court has brought shows of support for state counselor and defense team leader Aung San Suu Kyi from her ruling party and some ethnic groups, but many say Myanmar’s army deserves to be held to account for its decades of brutal campaigns against its own citizens.

The case filed at the International Court of Justice (ICJ) last month by Gambia on behalf of the 57-member Organization of Islamic Cooperation says Myanmar is responsible for genocidal acts intended to bring about the destruction of the Rohingya Muslim minority group in a 2017 crackdown.

As Aung San Suu Kyi and other government and military officials prepare to appear before the court in the Dutch city of The Hague on Dec. 10-12, her supporters have held and planned rallies in Yangon, Mandalay, Monywa, Mawlamyine, and other towns.

Myanmar communities in cities outside the country are also showing their support at events.

Myo Nyunt, spokesman of Aung San Suu Kyi's ruling National League for Democracy (NLD) party, said the NLD is backing the rallies and that some people from Myanmar will travel to the Netherlands to show their support for the state counselor, who also serves as the country’s foreign affairs minister.

Ethnic armed groups — including the Wa, the Mongla, and the Restoration Council of Shan State (RCSS) — that have struck peace deals with the government military have issued statements backing Aung San Suu Kyi.

“We are proud and support her in taking responsibility and traveling to face the trial,” said Nyi Rang, an external relations official for the United Wa State Army (UWSA) in the town of Lashio in northern Shan state.

“For many ethnic armed groups, the ICJ lawsuit has been filed against the country, so everyone in the country is responsible for the charges,” he said. “We need to show our solidarity with the government which is trying to prove that the offenses cannot be classified as genocide.”

“We don’t have a united stance on the issue,” Khun Okkar said. “I’ve heard one or two armed groups say that this issue is only relevant to the military or the government, and not to us. But this does not represent all ethnic armed groups.”

Myanmar security forces targeted Rohingya communities in northern Rakhine state during the 2017 crackdown with indiscriminate killings, mass rape, torture, and village burnings. The violence left thousands dead and drove more than 740,000 others across the border and into Bangladesh where they live in sprawling displacement camps.

The Myanmar government and Aung San Suu Kyi have justified the crackdown as a necessary counterinsurgency against Muslim militants who conducted deadly attacks on police outposts.

The government’s stance and its refusal to conduct or allow a credible investigation of the Rohingya expulsion have tarnished Aung San Suu Kyi’s international reputation, with rights groups rescinding international honors they bestowed on her during her fight for democracy and against military dictatorship.

But not all ethnic groups are backing the state counselor over the Rohingya genocide case.

On Nov. 28, three ethnic armed organizations and their respective political wings, which have not signed the government’s nationwide cease-fire pact, issued a statement of support for Gambia’s case against Myanmar at the ICJ.

The three groups also said they are backing efforts to prosecute Myanmar on similar charges at the International Criminal Court (ICC) and in an Argentine federal district court.

“The people of Myanmar have been persecuted by the military for many years,” said AA spokesman Khine Thukha.

“She [Aung San Suu Kyi] should not be defending war criminals who try to hide behind the term ‘the charge against the nation.’” he said. “She should have shown that she will stand for justice.”

“Both the ICC and the ICJ want to prosecute Myanmar military leaders who committed war crimes,” Khine Thukha added. “It would be best to cooperate with the international efforts to prosecute and punish the war criminals. Only then, will they refrain from committing further war crimes.”

'Days of impunity are numbered'

They noted that like the Rohingya, other ethnic nationalities in the Southeast Asian country have been subject to human rights abuses and persecution by the government army.

Ethnic Chin human rights and women’s rights activist Cheery Zahau said that Aung San Suu Kyi’s decision to lead the defense team before the ICJ is an attempt to garner political support in the country and at the same time secure trust in the military.

“Instead of going to the ICJ to defend the country, she should be working to make fundamental changes to stop rights violations on the ground and to protect citizens,” she told RFA’s Myanmar Service.

At the same time, the Worldwide Karen Community, a collection of nearly 50 overseas ethnic Karen groups, said that it supports the ICJ lawsuit to prosecute Myanmar soldiers who have committed many war crimes.

“As with the Rohingya, our Karen people have suffered for decades from the systematic human rights violations by the Burma Army,” a statement issued by the organization said.

“The Worldwide Karen Community is thus greatly heartened by these cases at the ICJ and ICC, as they send a clear signal to Burma Army leadership that the net of justice is closing in, and their days of impunity — for crimes against all the ethnic peoples in Burma — are numbered,” it said.

Ethnic Kachin community leaders are encouraging the Kachin public to back efforts to prosecute Myanmar at the ICJ.

“To prevent genocide from occurring in Myanmar, we should support the ICJ’s effort,” said Duwa Bamaw, chairman of the Kachin National Organization. “We should not support the government. It means you are supporting the offenders.”

I stand with justice.

I stand with justice.

“Instead of going to the ICJ to defend the country, she should be working to make fundamental changes to stop rights violations on the ground and to protect citizens,”

I thought that she ran to be elected because she wanted to make the country a better country for all.

Those who agree with OIC lackey Gambia will be remembered as Traitor for a long long time in Myanmar and will forever regret their bad decision to stand against their follow Myanmar citizen.