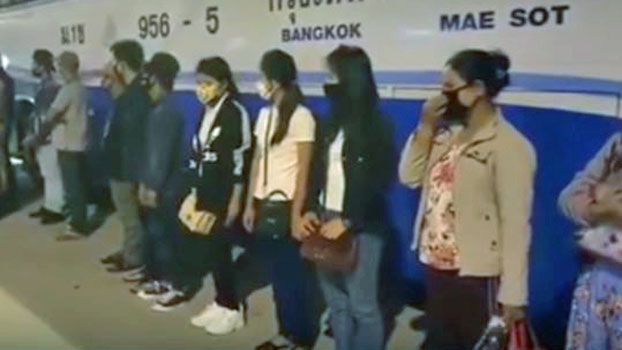 Thai police arrested and later released 300 migrant workers as they headed to the border to return home to Myanmar on Thursday amid the spread of the highly contagious coronavirus, part of an exodus spanning across Southeast Asia as factories in Thailand that rely on foreign labor close down, a labor activist, an embassy official, and a lawmaker said.

The workers, traveling in a caravan of 16 buses, were trying to return to Myanmar after Thai authorities issued an order forbidding groups from traveling to prevent the spread of the virus, also known as COVID-19. They were released in the evening.

“The do-not-travel order had already been issued in Tak province,” said Wai Lin Maung, a labor official at the Myanmar Embassy in Thailand, referring to the province in lower northern Thailand that borders Myanmar’s Kayin and Mon states.

“We posted a notice about this travel ban on Facebook,” he said. “Buses traveling to the Myanmar border are now being detained. There are about four checkpoints along the way.  Soldiers and police are checking at these points.”

After Thai authorities released the 300 workers, they were allowed to continue on to Myanmar, said Ye Min, a senior member of the Aid Alliance Committee.

Thai officials also said they would not release any other groups of migrant workers traveling home if they are caught at the surveillance points, he said.

“More than 300 workers who were arrested while traveling in 16 buses have arrived in Myanmar via the Myawaddy Bridge-2,” Ye Min told RFA’s Myanmar Service, referring to the Myanmar-Thai Friendship Bridge-2 over the Thangyin River, which connects the city of Mae Sot in Tak province with the city of Myawaddy in Kayin state.

“Some of them didn’t know about the travel ban, and others returned home even though they knew about it,” he added. “Thai authorities said they are going to take action against anybody who travels in the region after today. These workers were released because Mae Sot authorities helped them.”

Thant Zin Aung, a Kayin state lawmaker who represents the Myawaddy township constituency, warned other Myanmar migrant laborers to remain where they are.

“I want them to follow the rules and orders,” he added. “I don’t want them to get in trouble when they return home.”

Thant Sin Aung said the 300 workers were the only laborers to reenter Myanmar via the bridge’s border crossing on April 2, indicating that fewer of the roughly 3 million Myanmar migrant workers in Thailand are now returning home amid the spread of the coronavirus.

Myanmar nationals comprise the largest migrant worker population in Thailand, with recent estimates putting the figure at 2.3 million individuals, according to an August 2019 report on Myanmar migrants in Thailand issued by the International Organization for Migration.

Tens of thousands of migrant workers from Myanmar already have returned home from China and Thailand, with one returnee in Yangon testing positive for COVID-19 on Monday, prompting the Ministry of Health and Sports to warn of the possibility of a major outbreak.

Many workers who have returned are failing to heed the Myanmar government’s order to stay in quarantine for 14 days upon their arrival.

Most of the migrant workers are from Kayin and Mon state and Bago and Yangon regions, labor activists said.

All of them, regardless of where they live in Myanmar, have been sent to Kayin and Mon states, though it is not known where they are being quarantined, they said. The workers have been asked to sign an affidavit saying that they will follow the quarantine procedures.

As of Thursday, Myanmar reported 20 confirmed cases of COVID-19 with one death, while Thailand reported 1,875 cases with 15 deaths.