Interview: 'Government-owned Media Are Not Good For Democracy' 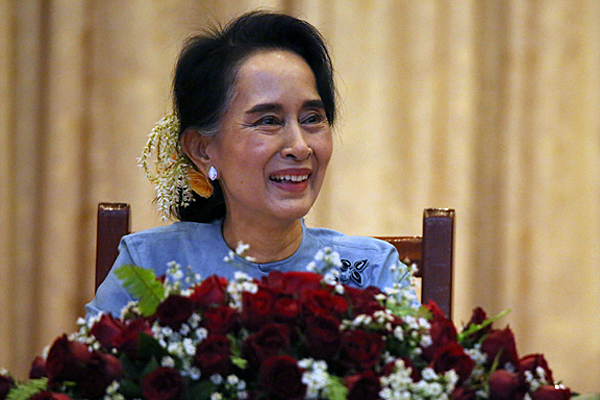 In the aftermath of her party’s overwhelming victory in the Nov. 8 elections, Myanmar opposition leader Aung San Suu Kyi has been preparing for a peaceful political transition from the current quasi-civilian government under the Union Solidarity and Development Party (USDP) to a more democratic one led by the National League for Democracy (NLD). She spoke with reporter Khin Maung Soe of RFA’s Myanmar Service during the “Hard Road to Democracy” program on Thursday about reorganizing the government to make it more efficient, ensuring transparency and eliminating state-run media outlets in the Southeast Asian country. The following is an edited version of their discussion.

RFA: You said you will merge some ministries, but government employees need not worry.

ASSK: Yes, There are too many government employees in some ministries and too few in others. We have to move them from the ministries that have little work to do to others with a lot of work. We have to reorganize.

RFA: What is your opinion about having government-run media in the country?

ASSK: I think government-owned media are not good for democracy. We will not abolish them immediately, but yet don’t want to delay doing it as well. It would be better if we did everything according to democratic principles as soon as possible. There are government supported media in the United States and United Kingdom, such as the Voice of America and the British Broadcasting Corporation, but they have their freedom. They are working with their own channels. It is important to work freely even though we have government supported media.

RFA: What are your thoughts about issuing pensions to politicians?

ASSK: We, the members of parliament (MPs) from the NLD, all will have political pensions as will others, and everyone has agreed to donate what we receive to places in need. We have our salaries, so we don’t need the pensions.

RFA: Will you attend the opening ceremony of the Union Peace Conference on Jan. 12, which will address political solutions to end the country’s armed conflicts and foster national reconciliation?

ASSK: I will not attend the upcoming peace talks because I have a lot of work to be done at parliament. We need as many MPs as possible to be in parliament.

RFA: What are your thoughts on the government or political parties receiving support from local and international companies or businesspeople?

RFA: What do you think about the decision by a Thai court on Dec. 24 to sentence two migrant Myanmar workers to death for the murders of two young British tourists on the Thai island of Koh Tao in 2014?

ASSK: We have to abide by Thailand’s laws. We have rights to appeal, and our government must work for them [the two Myanmar migrant workers] to exercise their full rights. I have heard that the Myanmar embassy in Thailand has hired many lawyers to work on this case.

RFA: The current members of the student union at Yangon University have asked the government to rebuild the historic student union building destroyed more than 53 years ago by the military government under former Prime Minister Ne Win. Will the NLD government rebuild it?

ASSK: Rebuilding the student union building will not be dangerous. It should be done if we can do it and if people really want to do it.

ASSK: We have this in the education law. Universities will work to form student unions according to their charters.

RFA: What message do you want to give the Myanmar people for the New Year?

ASSK: I don’t want people to be afraid of having duties and taking responsibility. I want to tell them to be proud of themselves for having an opportunity to undertake such responsibilities. Think of it as a good opportunity to do something for the country.

No question was asked about her plans to end human right abuses against the Rohinga minority? This is a big omission!