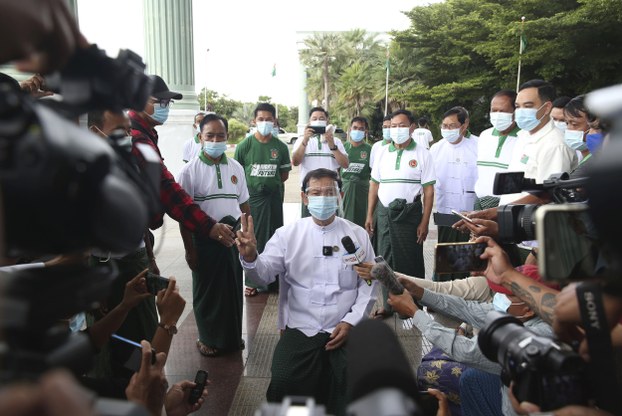 Than Htay (C), chairman of Myanmar's military-backed Union Solidarity and Development Party, talks to journalists at the party's headquarters in Naypyidaw, Sept. 9, 2020.

Myanmar’s main opposition party and other small parties have called for a postponement of nationwide elections in November, arguing that quarantine measures to combat a resurgence of COVID-19 have hobbled campaigning amid growing fear of the pandemic in a country that largely avoided the early 2020 wave.

The number of coronavirus cases have spiked in the country of 54 million people this month, forcing political parties to deal with restrictions on rallies, stay-at-home-orders, and quarantines in the seven-week race for votes on Nov. 8.

In appeals to the Union Electoral Commission (UEC), the parties said COVID-19 restrictions — social-distancing rules and facial mask requirements — have hamstrung campaigning, while the people of Myanmar fear contracting the deadly virus.

The main opposition Union Solidarity and Development Party (USDP) on Monday issued a video message from party chairman Than Htay calling for a postponement.

“We have had an average of 200-something infections every day after September 10.” he said. “If one party can’t contest the elections, it would be a huge loss, as the party who can exploit the situation would … gain control of the country.”

“I am broadcasting this video in an unhappy mood,” he said. “In a time like this, we don’t want to selfishly ask you to vote for our party’s candidates. Instead, we support what the best for the country and people. For the sake of the safety and lives of people, we will accept and cooperate if the election is postponed.”

Naing Than Shew of the Mon Unity Party told RFA that the government’s restrictions on campaigning could aid the ruling party.

“The COVID-19 pandemic is getting worse. If this trend continues, the election should be postponed,” he said.

“For now, those of us in the opposition parties face challenges in campaigning against the ruling NLD party” he said. “The COVID-19 restrictions give the ruling party advantages in coverage of the electoral districts.”

On Monday, Myanmar reported 3,195 coronavirus cases, including 263 new ones. The virus has claimed the lives of 32 people in Myanmar, including 12 new deaths reported Monday.

Ko Ko Naing, secretary of the Union Betterment Party told RFA’s Myanmar Service that it is impossible to conduct traditional campaigns under pandemic restrictions ordered by the authorities.

“In townships with stay-at-home orders, the parties are restricted from campaigning by going around the town on vehicles or going door-to-door. So, this leaves the parties with the option of campaigning on the internet only,” he said.

“If the parties cannot campaign freely, it is difficult to say whether this election will be free and fair,” Ko Ko Naing said. The UEC and the government should meet t he political parties and community leaders to relax the restrictions or they should just postpone the election to a later date.”

Like continental Southeast Asian neighbors Cambodia, Laos, Thailand, and Vietnam, Myanmar largely avoided widespread COVID-19 infections that spread around the globe through the first half of the year.

But Myanmar has seen a deadly return of the virus since mid-August, with notable spikes in the number of confirmed COVID-19 cases in populous areas and armed conflict zones in a country larger than France that is dotted with refugee camps.

Mya Nandar Thin, a consultant from the New Myanmar Foundation, which monitors elections, told RFA that the parties’ statements show “it is time for the election commission to consult with the political parties to decide whether to postpone the election.”

“People might think twice about going out to vote if there are more infections," she said. “If many people decide to sit out due to potential harm, it will affect the validity of the election.”

RFA attempted to contact the UEC by phone, but the commission said it would only reply to e-mail inquiries.

The UEC says a total of 6,689 candidates from more than 90 political parties and 280 independent candidates are running for office in the 2020 election.

“If the pandemic drives the people towards more hardships and the authorities tighten restrictions, it will affect the quality of election as well as the safety of the voters,” said Min Zeyar, vice chairman of People’s Party, a relatively new political party set up by the 88 Generation student leaders from 1980s pro-democracy protests.