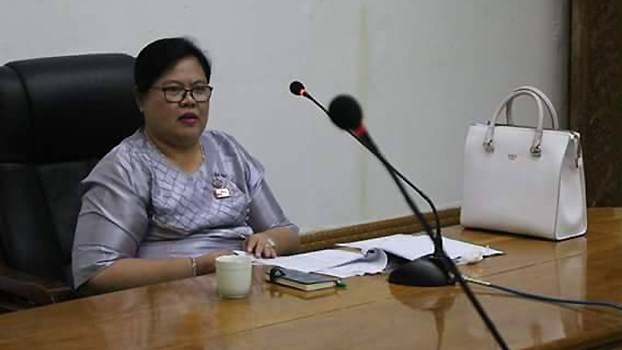 A court in Myanmar’s Thanintharyi Region on Friday handed a former high-ranking official from the ruling National League for Democracy a 30-year prison term on four counts of corruption and abuse of power.

Lae Lae Maw, who had served as the NLD’s chief minister for the Thanintharyi region, was dismissed from her position following her March 2019 arrest after residents of the region petitioned State Counselor Aung San Suu Kyi, Myanmar’s de facto ruler, for the official’s ouster.

She was convicted under Article 55 of Myanmar’s Anti-Corruption Law after a year-long trial on four separate counts, local media sources said.

Convicted with Lae Lae Maw were two directors and a general manager of Myanmar’s Global Grand Services (GGS) firm, who were charged with “abetting and conspiring” under Articles 55 and 63 of the Anti-Corruption Law.

The two directors—Thein Htwe and Aung Myat—were sentenced to prison terms of 10 years each, with the general manager, Thura Ohn, given a five-year term, according to a May 22 in the Irrawaddy online news service.

Hla Maw, a member of the 88 Generation Peace and Open Society’s committee from Thanintharyi’s Myeik District, welcomed the court’s decision on Friday, saying the conviction of a former high-ranking official of the ruling party will “improve people’s perception of both the government and the judicial system.”

“I think that today’s severe court sentence was appropriate, considering the high-level position of the person involved in the corruption. The ruling NLD government is sending the message that it will now take action against corrupt officials,” he said.

Reached for comment, defense attorney Naing Lin Tun said he will consult with Lae Lae Maw’s family on whether to appeal her sentence.

“We haven’t made any decision regarding an appeal,” he said. “I haven’t discussed this with the family yet, so I can’t say anything about it.”

Lae Lae Maw had been charged with abusing her authority as the region’s chief minister to improperly allocate nearly 2 billion kyat (U.S. $41,427,046) to the region’s Road Development Department, for which she acquired a house and two plots of land in her husband’s name free of charge.

Additional charges against the former chief minister cited bribes received for assigning land-clearing and construction work for festivals and at a local airport and university without requiring tender, and the sale of her family home to the GGS firm at a vastly inflated price in exchange for granting permission for the firm to engage in highly profitable business ventures.

“As for the [NLD’s] regulations, Daw Aung San Suu Kyi has repeatedly said that there are two things she will not tolerate within the party—sexual misconduct and the taking of bribes. These are the party’s rules,” he said.