Chinese-backed Megaprojects in Myanmar Continue to Raise Ire of Residents 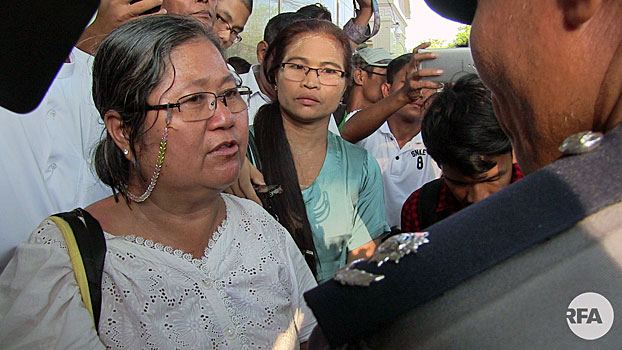 Members of Myanmar's Committee to Protect Mount Letpadaung try to submit a letter of protest against the Chinese-operated Letpadaung copper mine to a police officer stationed at the Chinese embassy in Yangon, Dec. 14, 2017.
RFA

Myanmar activists and the leader of the country’s Catholic Church on Thursday hit out at two controversial Chinese-operated infrastructure megaprojects that they say have caused environmental damage and subjected local residents to land expropriations without adequate compensation.

Activists from the Myanmar town of Letpadaung attempted to submit a written complaint addressed to China’s President Xi Jinping about the Chinese company operating a controversial copper mine in Salingyi township in the country’s northwestern Sagaing region, saying the firm had failed to act on recommendations outlined in a government report.

The large project run by China’s Wanbao Mining Copper Ltd. Company and Union of Myanmar Economic Holdings Ltd. (UMEHL), a Myanmar army-owned conglomerate, has come under fire by local residents and farmers who have long protested the company’s land takeovers in the area.

They have heavily criticized and staged protests against the operators for expropriating land without providing them adequate compensation and damaging the environment.

Naw Ohn Hla, head of the Committee to Protect Mount Letpadaung, told RFA’s Myanmar Service that he led a group of 20 members to the Chinese embassy in Yangon to submit the letter on Thursday, but an embassy police officer refused to accept it.

Because the embassy did not accept the letter, the group will protest soon in front of the Chinese embassies in Naypyidaw and Yangon, he said.

The activists also went to the home of State Counselor Aung San Suu Kyi, Myanmar’s de facto leader, and the Chinese Communications Office in the capital Naypyidaw on Wednesday, but were stopped by security personnel, he said. They handed over the letter addressed to Aung San Suu Kyi to the guards.

“Both the previous and current governments haven’t taken any action on the problems in Letpadaung,” he said. “The UMEHL promised it would follow up on suggestions in the report by the Letpadaung investigation commission, but it didn’t.”

Naw Ohn Hla also said the mine operators had discarded industrial wastewater in the farmlands surrounding the mine.

“That’s why the farmlands have been destroyed, and farmers can’t grow good crops and can’t farm on time,” he said.

“We want the [Chinese] president and Daw [honorific] Aung San Suu Kyi to know about it,” he said. “We will protest at the Chinese embassies in Naypyidaw and Yangon because we can’t be insulted anymore. We will ask the government that we elected what it is going to do for this region.”

Aung San Suu Kyi led a parliamentary inquiry commission on the Letpadaung project in the wake of a violent police raid on protesters at the mine site in 2012 and found that Wanbao had inadequately compensated farmers for their land and that the appropriation process lacked transparency.

Farmers who lost crops in 2014 and 2015 during later land confiscations for the mine project demanded proper compensation from Wanbao.

The company said that it had offered the farmers money, but that they refused to accept it.

Wanbao also indicated that it would not compensate villagers annually for money they would have otherwise made from crops, because the company leased the land from the government, not the farmers.

Earlier this year in February, about 100 Letpadaung residents blocked the road leading to the mine and demanded that Wanbao give them the 1,900 acres of land they were supposed to receive according to the parliamentary commission’s recommendations.

The following month, as many as 10 villagers and six police officers were injured during a clash when police fired rubber bullets at locals who were blocking the access road. Authorities charged 50 farmers with assault, illegal assembly, illegal demonstration, and destruction of state property for the protest. 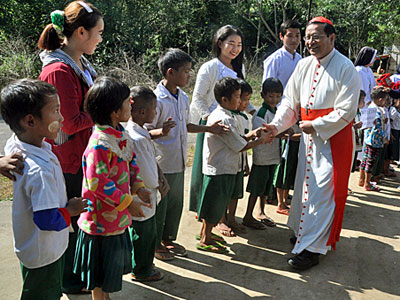 On Thursday, the leader of Myanmar’s Catholic Church told residents of northern Myanmar’s Kachin state that all citizens should object to the Chinese-financed Myitsone Dam, a massive hydroelectric power development project at the confluence of the Mali and N’mai rivers which form the source of the Irrawaddy River.

The controversial $3.6 billion, 6,000-megawatt dam was suspended in 2011 in the face of protests over its enormous flooding area and environmental impacts as well as anger over the fact that 90 percent of the dam’s electricity was expected to go to China.

Cardinal Charles Maung Bo told Catholic congregants during an evening prayer service at a church in Tanphaye village that the entire country should object to the dam project because it could destroy the economy and social fabric of the community.

“This project shouldn’t be completed,” he said. “It can destroy not only Kachin state, but also the entire country.”

“When everyone protests against this project, it should be stopped,” he said. “If not, there will be more problems. People around the country will be in danger because of floods.”

The project will also have detrimental impacts on river navigation and agriculture in Myanmar, he said.

Major General Nyi Nyi Swe, commander of the Northern Military Region, greeted the cardinal when he arrived in Kachin state to visit internally displaced persons camps housing villagers who fled fighting between the government military and the Kachin Independence Army (KIA), and several charity centers in the state capital Myitkyina.

Aung San Suu Kyi, who as opposition leader spoke out against the dam, tasked a 20-member committee in August 2016 with scrutinizing Myitsone and other planned hydropower dam projects on the Irrawaddy River and determining whether they should be allowed to proceed.

The Chinese have been pushing Myanmar for permission to continue work on the project, which had hardly broken ground when it was stopped by Aung San Suu Kyi’s military-backed predecessor in 2011.