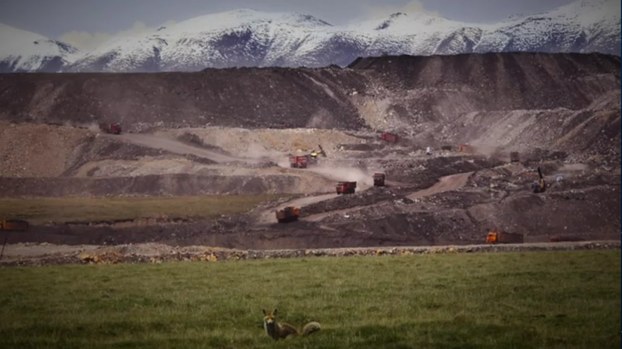 “Even though the Mining Company tried to bribe the families who are residing near the area, Tibetan nomads and farmers in the region are facing huge adversity, losing their herds to environmental problems,” a local source told RFA’s Tibetan Service.

“Waters are contaminated, too, and there is no one to report and complain to,” the source said.

Environmental protection groups have shown videos and photos of grass, water and even sheep have stained black by coal mine runoff and dust.

The Qilian range marks the border of Qinghai and Gansu provinces and serves as a source of the Yellow River, with glacier-covered mountaintops as high as 19,000 feet (6,000 meters).

Scientists have warned that the damage to the area’s soil could be permanent, which could aversely affect Qinghai Lake and the upstream portion of the Yellow River.

Xingqing recently had tried to project the image of an environmentally responsible organization that was helping to fix the mining area’s ecology, but its harmful mining operations continued.

“Tibetans have been calling on the Chinese government to do something about this issue for many years but nothing has come of it and Tibetan nomads have been struggling for their livelihood due to deteriorating environmental issue,” U.S.-based Tibetan legal expert Dolma Kyab told RFA.

Ma’s detention was sparked by a two-year investigation by the state media-affiliated Economic Information Daily newspaper, which found that Xingqing had mined the Qinghai side of the mountain range in Tianjun county since 2006 without a permit, earning some 15 billion yuan (U.S. $2.15 billion) in profits.

According to Xingqing employees quoted in the report, Xinqing was alerted in advance whenever provincial or national inspectors were planning to visit the mining area. The company would then stop mining for several days and its equipment and trucks were moved to piled slag, which made it look like they were reconstructing the damaged ground.

The report said that sometimes mining would continue in the evening after inspectors left.

According to local media reports, Li Jiexiang, the senior deputy governor of Qinghai confirmed that the company had conducted illegal mining activities and task forces from the police and the the anticorruption agency would investigate further.

The mining company has suspended its operations for further investigation.

Five Haixi prefecture officials were also fired and are currently under investigation for corruption.

In a June 2020 RFA report, sources contradicted Beijing’s claim that under Chinese rule, Tibet has successfully protected and preserved its environment.

The sources pointed to mining, illegal or otherwise as a major contributor to the region’s environmental decline.

“Tibet as the Roof of the World used to have a pristine environment, with hardly any problems with air and water. [But] the Chinese have excessively exploited Tibetan natural resources, and this has created issues with air and water pollution, and many animal species are now extinct,” Gyaltsen said.

In April, the London-based Free Tibet said in a report that “millions” of nomads had been forced from their grasslands by Chinese government policy, “opening their land for the extraction of resources and ending traditional agricultural practice which have sustained and protected the Tibetan environment for centuries.”

“Chinese government-owned mining companies are quickening their extraction of copper, gold and silver in Tibet,” Free Tibet said, adding that these mines are usually based close to rivers and that most workers in the mines are Chinese, who carry out their work without regard to the environment or to areas of religious significance to Tibetans living nearby.

Reported and Translated by RFA’s Tibetan Service. Written in English by Eugene Whong.