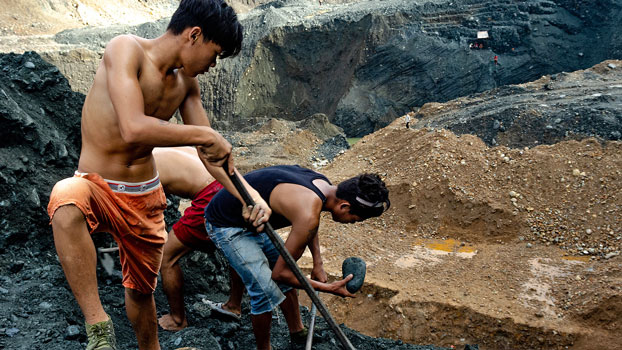 Prospectors dig for jade remnants on a slag heap at a mine near Ma Mon village in Hpakant township, northern Myanmar's Kachin state, July 9, 2020.
RFA

Hundreds of migrant jade prospectors continue to scour slag heaps for pieces of the precious gemstone amid dangerous conditions during the monsoon season in Myanmar’s Hpakant mining area, despite a deadly mudslide that killed roughly 200 scavengers in early July.

Heavy rains triggered the collapse of huge piles of muddy waste known as tailings in the mineral-rich region of Kachin state on July 2 and created a “lake of mud” full of bodies of scavengers who handpicked jadestones in abandoned mining projects.

At least 300,000 men and women in the Hpakant area rely on scavenging to eke out a living, with most of the pieces they find exported illegally to jade markets in neighboring China, where demand for the gemstone is high.

Those who narrowly escaped the early July disaster said they must continue scavenging to make a living, though the risk of additional deadly mudslides remains high amid torrential rains that saturate the country from late May to October.

“For us, the poor laborers, we cannot have our own mining plots, [so] we have to scavenge wherever we can whenever we have the chance,” said Kyaw Soe, 28, who survived the mine landslide that occurred near Hpakant’s Wai Khar village.

Mine owners and local officials prohibit amateur prospectors from searching for jade in areas where large stones are found, he said.

“Both the government and Kachin ethnic groups have ordered seizures if we find large jadestones,” he added. “It’s not possible to take the large stones out of the mines.”

Several ethnic armed organizations as well as Myanmar’s powerful military have financial interests in jade mining, making money through both formal and informal investments in mining and trading companies.

Most privately owned jade mining companies temporarily cease operations during the monsoon season, presenting a good opportunity for scavengers, or yemase as they are known locally, to dig around for bits of the stone, Kyaw Soe said.

Some jade scavengers must hand over any pieces they find to their bosses who arrange their accommodations in Hpakant and divvy up the proceeds from sales of the stones, while others operate entirely on their own. 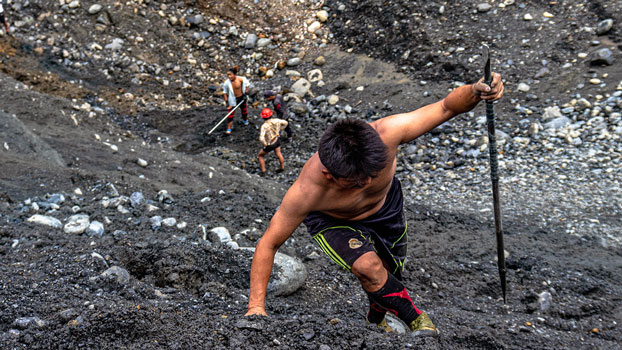 A jade prospector makes his way up a slag heap at a mine near Ma Mon village in Hpakant township, northern Myanmar's Kachin state, July 9, 2020. Credit: RFA

The Myanmar government issued jade mining licenses during the 2015-16 fiscal year that covered more than 32,000 acres, an area equivalent to 24,000 football pitches, according to a December 2018 report on jade mines in the Southeast Asia country by the New York-based Natural Resource Governance Institute.

Such a vast area gives scavengers wide swathes of mining plots to scour, so that when one operation closes, they can easily move to another.

The prospects of finding valuable jadestones and securing huge amounts of money to start a business at home draw thousands of impoverished people from across Myanmar to Hpakant with their families or friends.

Besides the dangers of deadly landslides, they also must navigate Hpakant’s lack of rule of law as well as rampant drug abuse, with some scavengers becoming users themselves.

Despite the deaths of friends and relatives in landslides, many prospectors said they stay in the business in hopes of finding a haul that will change their lives for the better.

Htay Myint from northern Myanmar’s Sagaing region said his destitution has made him impervious to risking his life to landslides or floods while combing through piles of rubble during the monsoon season.

“The flooding can drag people away since jade collectors look for the pieces of jadestone along the water flow,” he told RFA. “This is very perilous. I fear the risks, but poverty has driven me to come here.”

“I don’t have a choice, so I have remained here,” he added.

A day after the landslide, President Win Myint appointed a six-member investigative body led by Ohn Win, Myanmar’s minister for natural resources and environmental conservation, to look into the causes of the latest of many accidents to hit the gemstone industry.

Ohn Win told local media that “greedy” miners were to blame, prompting criticism of his lack of empathy for impoverished freelance prospectors who work in an industry with weak oversight and regulations.

“The regulatory organization which is in charge of rules and regulations for jade mines is mainly responsible for preventing these kinds of accidents. This organization is formed by the government,” Hanna Hindstrom, senior campaigner for Myanmar at the NGO Global Witness, told RFA.

In the wake of the July mine landslide, Kachin state’s Ministry of Natural Resources and Environmental Conservation said that three of 13 jade mining business owners who ran illegal scavenging activities had been arrested under Section 50(a) of Myanmar’s Gemstone Law, passed in 2019 to govern mining activities.

The Myanmar military, which maintains order and security in Hpakant, demoted Kachin state’s security and border affairs minister and an officer in charge of a military unit to their former positions after deeming them responsible for the disaster.

RFA could not reach military spokesmen on Friday for further comment.