Mudslide at Myanmar Jade Mine Kills At Least 162 Scavengers 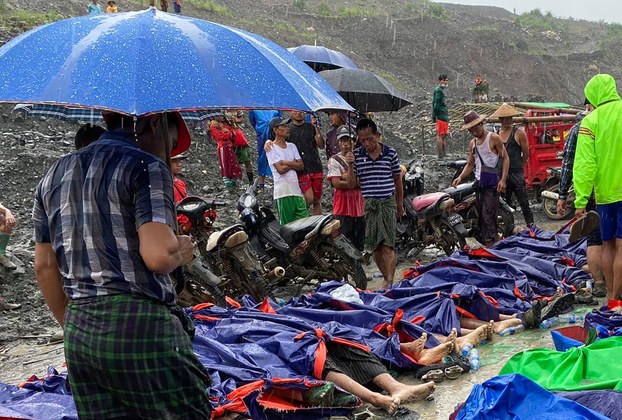 People gather near the bodies of victims of a landslide near a jade mining area in Hpakant, northern Myanmar's Kachin state, July 2, 2020.

A massive landslide at a jade mine in northern Myanmar on Thursday buried more than 200 scavengers, killing at least 162 and injuring at least 54 others, rescue volunteers said, in the latest disaster in an industry plagued by corruption and lack of government oversight.

Heavy rains brought small mountains piles of loose dirt and rubble on the scavengers, creating a “lake of mud” full of bodies early Thursday morning in Kachin state’s Hpakant township, the site of repeated illegal mine tragedies killing scores of people each year.

“It has been raining nonstop, day and night here in Hpakant all this week,” Shwe Thein, chairman of the ruling National League for Democracy (NLD) party’s office in the township, told RFA's Myanmar Service.

“There are weak spots in the soil near Wai Khar village. They collapsed during the heavy rains,” he said.

“The rescue operations are delayed by the heavy rains here. There is a risk of more landslides, so we paused our operations,” La Jon, deputy head of the Hpakant Township Fire Department, told RFA.

The scavengers, or yemase as they are known locally, are among Myanmar’s poorest citizens. They come from all over the country to sift through rubble dumped by the mining companies for discarded jade stones.

Volunteer rescue workers described a hellish scene as they toiled in the mud to try to recover the scavengers’ bodies and find survivors.

“The bodies are buried in the lake of mud. We are using the lifebuoys and boats to recover [them],” said Saw Linn, a volunteer from the local humanitarian group Thin Khar.

“We covered the recovered bodies with plastic and transported them to the clinics. Many bodies are still under the water,” said Saw Linn.

Zaw Moe Htet, a Hpakant-based journalist, said that rescue vehicles were struggling to reach the disaster site given the poor road conditions.

“The whole area has been turned into muddy ponds by the heavy rains. There is also a risk of further collapses,” he said.

“The vehicles to transport the bodies cannot come close to the landslide site. Rescuers went [on foot] down into the pit. They are manually carrying the recovered bodies about a furlong [1/8 mile] and putting them on the ground in the plastic,” said Zaw Moe Htet.

“They need to carry these bodies farther to a place where vehicles can reach,” the journalist said.

As of Thursday night local time, 162 bodies had been recovered and 54 injured people were sent to a hospital in nearby Wai Khar village.

According to the Kachin state government, official mining activities were suspended for three months starting Wednesday due to the increased risk of mudslides.

“But we cannot stop the jade scavengers who came to collect valuable stones at the site,” Darshi Lasai, of the state’s Natural Resource and Conservation Ministry told RFA.

“The mining companies use explosives, which have weakened the soil. That’s what causes these landslides,” the ministry official said.

Fatal landslides and mudslides at mining sites in the Hpakant area are common, as mining companies have not been held accountable by law.

According to the records of NLD party’s township office, at least 137 people were killed in seven landslides and rubble pile collapses in Hpakant township last year. In November 2015, a similar collapse of jade mining waste piles killed 116 scavengers and left 100 missing and presumed dead.

According to Darshi Lasai, the state government does not have jurisdiction over the mining companies, as their plots are granted and administered by the central Union government.

“We are only coordinating with the [Union government’s] instructions here on the ground. We cannot give orders to these companies. We can only recommend that they be more careful in their mining activities,” he said.

The London-based anti-corruption NGO Global Witness said the multibillion dollar mining sector in Myanmar is run by companies linked to the country’s military, enabling them to skirt government scrutiny.

A member of Myanmar’s parliament representing Kachin state said that legislation to regulate mining practices has been bogged down by red tape.

“It is very difficult to administer mining activities because there are over 1,000 excavators digging in such a small area in Hpakant,” lawmaker Khin Maung Myint said.

In 2019, lawmakers passed a Gemstone Law governing mining activities, but the statute has yet to be implemented, he added.

Global Witness condemned the Myanmar government’s failure to prevent “reckless and irresponsible mining practices,”  saying that the NLD has not yet enacted reforms to the mining sector that it promised upon coming to power nearly five years ago.

Despite the Gemstone Law’s passage in 2019, the sector remains “corrupt,” the NGO said.

“The government has turned a blind eye to continued illicit and rapacious mining practices in Hpakant despite vowing to reform the hazardous sector,” said Paul Donowitz, campaign leader at Global Witness.

“The longer the government waits to introduce rigorous reforms of the jade sector, the more lives will be lost. This was an entirely preventable tragedy that should serve as an urgent wake-up call for the government,” he added.

Up to 90 percent of the world’s jadeite is mined in Hpakant, and most of ends up for sale in China, where it is prized for jewelry, researchers say.