Rights groups slam the verdicts on two court cases, saying 2012 is the worst year in a decade for rule of law in Cambodia.
2012-12-27
Tweet

A villager breaks down after hearing the verdict on Yorm Bopha's case outside the Phnom Penh municipal court, Dec. 27, 2012.
RFA

The Cambodian judiciary came under fire Thursday after a land rights activist was jailed for three years on trumped-up charges and two men were sent to prison as scapegoats for the murder of a top unionist, according to rights groups.

Yorm Bopha, who had championed the right to housing for residents forcibly evicted from the capital Phnom Penh’s former Boeung Kak Lake, was ordered to serve three years by a municipal court which convicted her for committing “intentional violence" in connection with the beating of a suspected thief.

In a separate case, an Appeals Court upheld the 20-year jail sentences imposed by a lower court on two men—seen by rights groups as scapegoats—convicted for the killing of trade union leader Cha Vichea in 2004.

The men, Born Samnang and Sok Sam Oeun, had been freed on bail in December 2008 by the Supreme Court after three years in jail to allow further investigation.

“This verdict adds to the many tragedies which occurred in 2012, making it the worse year in over a decade when it comes to human rights and rule of law,” said local rights group LICADHO Director Naly Pilorge.

The charges against land activist Yorm Bopha were fabricated, rights group said, accusing the authorities of wanting to punish her for her campaign to seek the release of 13 Boeung Kak Lake women activists who were sentenced to up to two-and-a-half years’ imprisonment in May 2012 simply for participating in a peaceful protest.

The verdict against Yorm Bopha sparked outrage amongst her supporters outside the court, with at least five women protestors injured by police wielding electric shields and batons, eyewitnesses said. Some of them wept on hearing the decision.

The charges "were purportedly in connection with the beating of a suspected thief, but the real case against her is crystal clear—she, and the rest of the Boeung Kak community land activists are thorns in the side of the authorities, and they need to be silenced," 17 nongovernmental organizations said in a statement.

“With this three year sentence comes yet another stark warning to grassroots activists who dare to challenge the powers that be—shut up or we will lock you up,” Naly Pilorge said.

On Wednesday, another prominent land rights activist, 64-year-old Tim Sakmony, who led the opposition by the Borei Keila community against the demolition of their homes to make way for a commercial real estate project, was convicted of making a “false declaration” after she had also participated in protests to defend land rights.

"The fabricated charges used to convict [the] two housing rights activists in Phnom Penh’s Municipal Court confirms the dire state of Cambodia’s justice system and rule of law in the country," righs group Amnesty International said in a statement Thursday.

“These shocking verdicts show why Cambodians have good reason not to trust their courts,” said Rupert Abbott, Amnesty International’s researcher on Cambodia.

Cambodian Center for Human Rights Director Ou Virak, who monitored the court hearing, said that he was sad over the conviction and that "the court is being used as a tool for the rich and powerful people."

The Cambodian Human Rights Action Committee (CHRAC)—a coalition of 21 NGOs—called on the higher courts to overturn the judgment of the Phnom Penh Municipal Court when an appeal is lodged.

In Chea Vichea's murder case, after the Appeals Court upheld the 20-year sentences of Born Samnang and Sok Sam Oeun on Thursday, presiding judge Chhuon Sunleng ordered 10 police officers to force the two men to thumb-print their names to accept the convictions before they were taken to Prey Sar prison.

A group of 19 nongovernmental organizations said in a statement that the judges had dismissed and ignored evidence and testimonies in favor of the two.

The sole credible eyewitness to the killing—a newspaper seller standing next to Chea Vichea when he was murdered—had stated that Born Samnang and Sok Sam Oeun were not the killers she saw on that day, the statement said.

A former lead cop on the murder investigation, ex-Phnom Penh police chief Heng Pov, had also stated that the two men were not the killers, it said.

The verdict "has left us speechless,” said Moeun Tola, head of the labour program of Cambodia's Community Legal Education Centre. “The Appeals Court decision defies any sense of justice and rule of law.”

Two two men cried for justice and sought the intervention of King Sihamoni.

“They [authorities] have abused me again. This is very unjust,” Sok Sam Oeun told reporters as police led him out of court. "The King and Samdech [Prime Minister Hun Sen] should help release me.”

Thursday's verdicts come at the end of a terrible year for justice in Cambodia, Amnesty International said, citing various cases.

Last week, charges were inexplicably dropped against the former governor of Bavet town in Svay Rieng province accused of injuring three women factory workers in a shooting in February.

Meanwhile, prominent journalist and radio station owner Mam Sonando, sentenced to 20 years' imprisonment in October on allegations of inciting "secession," is in jail waiting for his appeal trial hearing to be scheduled.

“Contrary to upholding the rule of law, the Cambodian courts have been piling one injustice on top of another and ensuring that impunity rules,” said Abbott.

“Pressure from development partners and strong, urgent action by Cambodia’s government is needed to end this mockery of justice.” 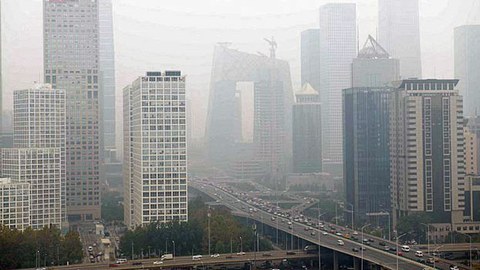