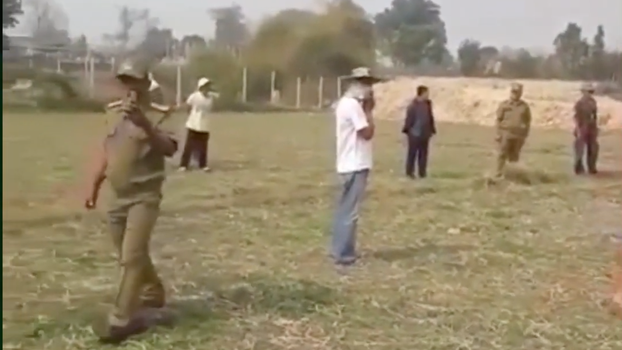 This is a screenshot of a video showing a land dispute protest in Vientiane, Laos. Two villagers were arrested after it was posted on social media March 16, 2020.

Authorities in the Lao capital of Vientiane are holding a young villager detained three months ago during a land dispute in Saysettha district’s Xiengda village, depriving him of adequate food and forbidding family members from seeing him, Lao sources say.

The young man, named Poy, was taken into custody with another villager, a young woman named Keo, on March 16 after a video showing them arguing with police over the confiscation of their land to build a medical college and hospital was published on Facebook, sources told RFA in an earlier report.

Keo, who was “re-educated” by police while in custody, was later released after her family accepted compensation for their property loss and she promised to abandon her protest, sources said.

Poy meanwhile remains in detention, has been denied family visits, and is not being properly fed. And though family members bring food to his jail every day to be given to him, some of it may not have been delivered, a villager with connections to officials at the jail told RFA’s Lao Service at the weekend.

“Poy has been held in jail for almost three months now, and officials are still not allowing his family to see him,” RFA’s source said, speaking on condition of anonymity.

“He wants his family to bring him more food, since he can’t fill his stomach with what he’s given and never gets enough to eat,” he said.

Family members have still not been told what Poy will be charged with or when he will be taken to court, the source said.

Reached by RFA, an official at the office of the prosecutor holding jurisdiction declined to comment on Poy’s case, saying that he has not yet received any relevant documents from the police.

A Lao expert on civil law said however that in cases of cases of minor crimes, police investigators will usually send reports to prosecutors within two months of a suspect’s arrest, but will take even more time than this if further evidence is required.

On June 10, ten families representing Xiengda villagers who have refused offers of compensation for their land traveled to the capital to petition the prime minister for help, but were turned away by authorities who told them to go home and stop making trouble, sources said.

The confiscated land has now been cleared for development, and the Xiengda villagers dispossessed in March now have no land left on which to grow rice and vegetables to support their families, sources say.

A key source of local social tension in Laos is the widespread practice of land grabs in which authorities seize land from people for development projects without paying them fair compensation for lost crops, property, and livelihoods.