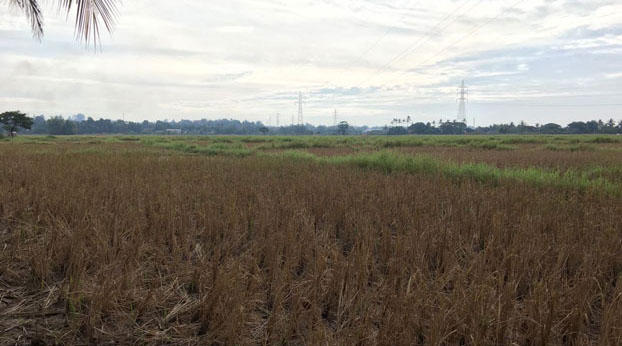 Land to be taken for the Vientiane Expressway in Laos is shown in a 2020 photo.
RFA

Residents of the Lao capital Vientiane are resisting seizure of their land by a Lao-China joint venture building an expressway, saying they had been promised earlier their land would not be taken, and calling offers of compensation unacceptably low, Lao sources say.

The project, a 13-km roadway connecting That Luang Marsh to Dong Mak Khai village in a suburb of Vientiane, is scheduled for completion in February 2023 and is being built by the Vientiane Expressway No. 1 Sole Company Ltd., a joint venture between a Lao firm and China’s Norinco Company.

When finished, it will have taken 300 hectares of land from 21 villages in Vientiane’s Saysettha and Xaythany districts, sources say, with an estimated total of 350 billion kip (U.S. $39 million) paid in compensation to dispossessed landowners, sources say.

“The offer is too low,” one of 248 landowners now fighting the land grab told RFA, speaking on condition of anonymity.

“We will not accept the compensation,” agreed another landowner, also speaking on condition he not be named. “The company has only two options: First, it can buy our land at market price, or, second, it can give us new lots of land of the same value and in the same area.”

“I was told in January that my land would not be encroached on,” the same source said, adding, “But just last week, the project developer announced that my name was on the list of landowners whose land would be taken.”

Landowners whose names appeared on the list have been told by Vientiane’s Natural Resources and Environment Department that they must accept the compensation offered to them by July 31, and that  if they fail to do this, the project developer will deposit compensation directly into their bank accounts and immediately begin construction, sources said.

“We have no intention to oppose the government’s development projects, but if the project wants to acquire people’s land, the company should abide by the relevant regulations and laws, and it should be considerate and listen to the people.”

“You know that it is not easy to have a piece of land. We have to save money for a long time to get it,” he said.

'This is not acceptable'

Also speaking to RFA, another landowner in the Vientiane suburbs vowed to fight the encroachment on his land, saying that authorities had assured him that a plot of land he was planning to acquire was not on the list of land to be taken by developers.

“So I bought it afterward with a large amount of money I took from my longtime savings,” he said.

“Things will be fine if the company pays me compensation large enough for me to buy another piece of land in the same area, but the company is offering only $10 per square meter, six times less than the market price, and this is not acceptable.”

“The company told me to go to their office and pick up their compensation, but I’m not going to go,” another landowner said, adding that he has now signed a document rejecting their offer and is hoping the country’s parliament, the National Assembly, will intervene.

“Many landowners have submitted complaints to the parliament about losing land in this area,” he said. “I’m hoping that the Assembly will come down here to look at what’s happening.”

Writing on social media, a landowner in the Saysettha district said that he and other property holders in the area had been told in January that their land would not be taken, “but early in July, our names suddenly appeared on the list of affected landowners.”

“I’m shocked and suspicious,” he said. “The government should inspect this project and make sure that its dealings are fair.”

Land located 500 to 600 meters away from the route of the proposed expressway is meanwhile also being claimed by the developing company, with a 100-hectare section likely marked out for construction of a housing complex, another landowner said.

“So I’m going to keep fighting for justice,” he said.

Reached for comment, officials at the offices responsible for paying compensation to affected landowners and at the Economic Affairs Office of the Lao National Assembly declined to discuss the issue over the phone.

A key source of local social tension in Laos is the widespread practice of land grabs in which authorities seize land from people for development projects without paying them fair compensation for lost crops, property, and livelihoods.