Shandong Farmer in Suicide Bid After Harassment Over Resettlement Plan 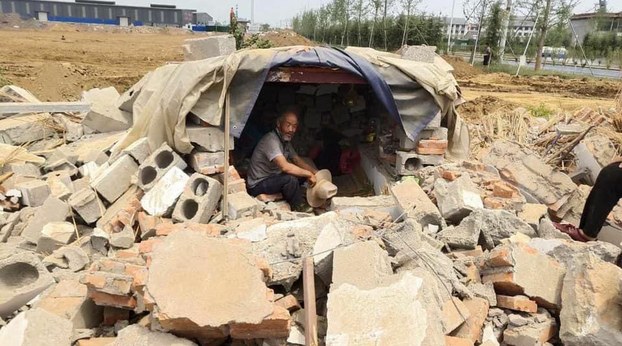 Photo courtesy of a resident

A resident of the eastern Chinese province of Shandong who was being pressured by the authorities to join a controversial resettlement plan was sent to hospital after attempting suicide by drinking pesticide at the weekend, RFA has learned.

The resident of Shandong's Lanling county, who was identified only by his nickname Lao Li, drank the pesticide on the evening of July 25 outside the headquarters of the Lanling county police department after being placed under intolerable pressure by police over his refusal to sign up for the plan, fellow residents told RFA on Monday.

"They are driving people to take their own lives," one resident said. "[One guy] was driven to drink pesticide outside the county police department."

Provincial authorities suspended a mass rural resettlement program at the end of June after it was criticized by the ruling Chinese Communist Party's official newspaper, the People's Daily, in the face of growing public anger.

While government land grabs in rural areas have sparked mass unrest and, rarely, organized resistance across China for decades, the Shandong program of "village mergers" was far more ambitious in scope, and had been packaged as a bid to improve the lives of farming communities in a total revamp of rural areas.

But local residents told RFA that the program had left them homeless and with no income, compensation, or social security assistance.

Three separate sources in Lanling county confirmed Lao Li's suicide bid, although they declined to be named for fear of reprisals.

Lao Li had been accused of "illegal mining operations" by police, which fellow residents said was a form of official retaliation to be dropped if he complied with the resettlement plan.

"Plainclothes [state security] police are guarding him in the ward and are putting him under all kinds of pressure to say that his suicide attempt was for personal reasons and nothing to do with the demolition program," a second Lanling resident told RFA.

Staff at the local hospital confirmed to RFA that Lao Li was still receiving treatment there on Monday after ingesting pesticide.

But a member of staff who answered the phone at the Lanling county police department on Monday denied that anyone had ingested pesticide outside the building, saying there was nothing in the official record to show that this had happened.

Sources said Lao Li had been threatened with charges by police relating to a business he ran 20 years ago only after he refused to sign up for the resettlement plan. He is currently out on bail pending trial for the charges.

Fellow residents said they felt anxious, angry, and helpless over Lao Li's desperate action, which came after the Shandong authorities ordered the resettlement plan suspended following a public outcry over the widespread abuse and coercion of local residents.

Rights lawyer Chen Jiangang said it is very common for police in China to use coercion, harassment, and intimidation to deal with holdouts to government-imposed development plans.

"They are basically using coercion to compel obedience," Chen said. "There is nothing to be done about it because all the lawyers with any courage to speak for them are currently [also] being persecuted and jailed."

U.S.-based legal scholar Chen Guangcheng said he also recognized the behavior from his time as a rights activist and legal advocate for rural communities in Shandong, an activity that earned him a four-year jail term for "damaging property and organizing a mob to disturb traffic" in 2006.

"[When I read about this] I immediately remembered how they persecuted people back then," Chen said of his life in Shandong's Linyi county. "Their tactics haven't changed one bit."

"They find an excuse to arrest you, and if you confess to the charges you can go home, but if not, they put you in a tiger chair, and deny you food and water," he said, in reference to a chair with restraints for hands and feet.

"Reason is useless when you are dealing with an authoritarian system with no shame and no moral compass," he said.

But he said bad publicity could still affect government policy.

"If you demolish a village or a family home, and nobody says anything, then dozens of counties and villages will continue to suffer," Chen said. "The [Chinese Communist Party] keeps doing these things, and we have to keep on exposing them."

He estimated that his campaigns against forced abortions and sterilizations in Linyi in the early 2000s had resulted in an extra 90,000 births in the region.