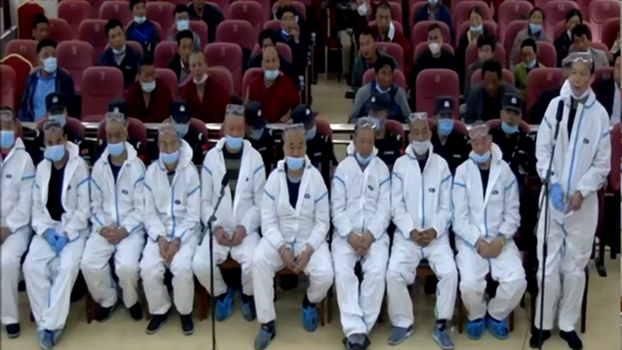 Tibetan land protesters are shown at their trial in a court in Gansu's Sangchu county, June 29, 2020.
Screen Grab

Ten Tibetans drew stiff prison terms at the end of June in China’s Gansu province after attempting to block construction of a slaughterhouse and demanding compensation for confiscated land in protests that Chinese authorities said had “disturbed social order,” RFA has learned.

Convicted at the end of a two-day trial held from June 28 to 29 in Gansu’s Sangchu (in Chinese, Xiahe) county, the men were sentenced to terms ranging from eight to 13 years and given fines of 50,000 to 70,000 yuan, Tibetan sources said.

Among those sentenced, two monks from Sangchu’s Namlha monastery named Tashi Gyatso and Tsewang drew the heaviest penalties, with both men sentenced to prison terms of 13 years and fined 70,000 yuan (U.S. $10,008) each, a Tibetan living in exile told RFA’s Tibetan Service this week.

“Both monks were members of the monastery’s democratic management committee, and had been appointed by local members of the community,” RFA’s source said, speaking on condition of anonymity and citing contacts in Sangchu.

“Along with the other eight defendants, they were arrested in 2019 after their failed attempt to block construction of a slaughterhouse and their demand for compensation” for Tibetans whose land has been taken for the project, the source said.

A television record of the trial obtained by RFA showed all defendants pleading not guilty to the charges of obstructing government construction projects and “causing social disturbances” made against them.

“The sentences given to us are unfair,” the monk Tashi Gyatso said addressing the court, adding that money given to him and Tsewang in partial compensation by the Hui Muslim owners of the slaughterhouse had not been diverted by them for personal use, but had been given instead to their monastery.

“We haven’t broken any of the country’s laws. Why is the court sending us to prison?” he asked.

Another defendant, Gyal-lo, pleaded ignorance of any rules he might have broken, saying, “I am uneducated, as I didn’t attend school as a child.”

“But we worked to protect the interests of the monastery, and our services to the monastery are now being called illegal. We don’t believe we have done anything against the law. We only carried out our responsibilities according to the instructions given to us by the township government,” he said.

“We appeal for clemency, as we are now all old,” he added.

A local Tibetan who attended the trial told RFA the verdict against the 10 men appeared to have been determined by authorities in advance.

“It is sheer theatrics to hold such a trial when the verdict has already been passed. This trial was a farce and a sham. The Tibetans did not receive justice,” said the man, who requested anonymity for his safety.

After failing to block construction of the slaughterhouse at Barka Thang township in Sangchu, local Tibetans had protested over several years to demand compensation for land lost to the project and damage to structures along a road being built, including cracks in the wall of a local restaurant, the source said.

The accused Tibetans ranged in age from 50 to 70 years, and had appealed for clemency both during their interrogations and at trial, saying they had only represented the wishes of local residents to protect their land and fight for their rights.

“Therefore, they launched their advocacy campaign,” he said. “They feel strongly that they have not committed any crime, but the court disregarded their appeal and went ahead with its harsh sentences.”

Disputes over the project and the protests had created a rift in the Barka Thang community for several years, another source in exile said, also citing contacts in the region.

“And there are many stakeholders involved, as the controversy is intricately connected with the interests of local Tibetans, Chinese officials, Chinese business owners, Chinese workers, and the Hui Muslims.”

“But in the end, it was the 10 Tibetans who bore the brunt of all the trouble caused by this controversial project,” he said.

Development projects in Tibetan areas have led to frequent standoffs with Tibetans who accuse Chinese firms and local officials of pilfering money, improperly seizing land, and disrupting the lives of local people.

Many result in violent suppression and intense pressure on the local population to comply with the government’s wishes, with protest leaders frequently detained and charged under cover of a Chinese campaign against so-called “underworld criminal gangs” in Tibetan areas.

Reported by Lhuboom. Translated by Dorjee Damdul. Written in English by Richard Finney.