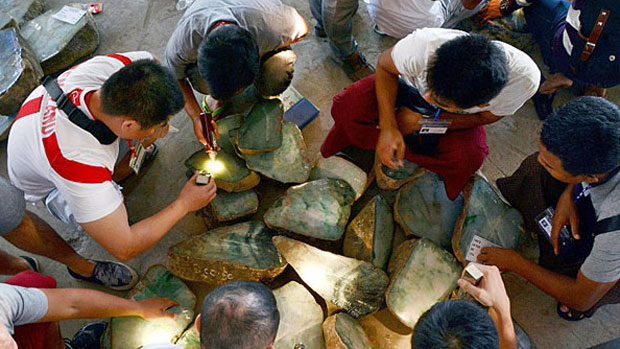 Myanmar’s trade in jade is now dominated by direct sales online, with the highly valuable stone often smuggled untaxed across the border to Chinese buyers, sources in the Southeast Asian country say.

Formerly, jade was evaluated by Chinese buyers and sold on site in local markets, but the nature of the trade began to change during the last three years, sources said, with one broker in central Myanmar’s Mandalay saying that revenue to the country is now being lost.

“Yes, these gems are being sold without being taxed,” Ko Pan Thee, a shop owner in the Mandalay Gems Circle, a compound for local trading centers set up by municipal authorities, told RFA’s Myanmar Service.

“The government is not getting any taxes from these small trading centers in Mandalay,” he said. “They only get the entrance fee paid by visiting buyers, nothing more. And what is being taken across the border is a hundred times more valuable than what is being sold here.”

Sales of jade online now account for about 80 percent of the local market, he said, adding, “If we continue in this way, there will be nothing left to sell in the Mandalay Circle in one or two years.”

Online transfers of money from buyers to sellers of jade stone or finished products via the social media platform WeChat are also not being taxed, causing further losses of revenue to the country, sources said.

Not covered by law

Speaking to RFA, Than Zaw Oo, general manager of the government’s Myanmar Gems Enterprise, which regulates legal gems sales, said that online sales of jade and money transfers from buyers are not covered by the country’s Gemstone Law passed in December 2018.

But the numbers of buyers online have steadily climbed in the last few years, driving the trade itself farther from the markets, sources said.

Meanwhile, Myanmar’s Hpakant region, where up to 90 percent of the world’s jade is mined, has seen a significant number of deaths over the past few years when slag heaps collapsed on scavengers searching for pieces of the valuable gemstone left behind in mining operations.

Reported by Thika Tun and Win Ko Ko Latt for RFA’s Myanmar Service. Translated by Than Than Win. Written in English by Richard Finney.