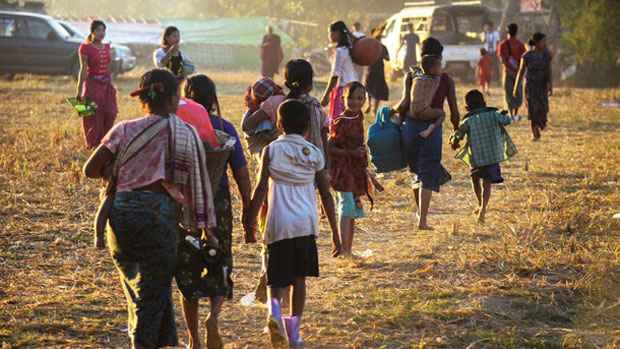 None of these groups were in Bangladesh, nor was the country “harboring any terrorist organization within its soil,” the Bangladeshi Ministry of Foreign Affairs said in a strongly worded statement.

“The allegations are totally fake and baseless,” the ministry said.

“It is not possible to operate terrorist bases in Bangladesh because of high alertness and effective preventive measures by the security forces” that were in line, it added, with the government’s zero tolerance policy toward such groups.

The Arakan Army (AA) last week launched raids on police outposts in Buthidaung township that left 13 policemen dead and nine others injured, officials said. The AA said it lost three of its fighters in the violence. The group is fighting the Myanmar military for greater autonomy in Rakhine and claims to represent the region’s Buddhist Rakhine ethnic group.

The ministry blasted Myanmar based on comments made by Zaw Htay, the spokesman for the Myanmar’s President’s Office, during a press conference in Naypyidaw on Monday.

“On the Bangladesh side the Arakan Army has two bases and ARSA has three bases. Therefore, Myanmar army has lodged a complaint with the Bangladesh military attaché over the issue,” Zaw Htay told reporters then. The presidential spokesman did not state the source for this information.

“The Myanmar government has denounced the AA as a terrorist organization and ordered the military to implement effective counter-insurgency measures against it,” he said.

He also accused the Arakan Army and ARSA of being linked, allegations that were denied by the AA on Tuesday, according to Radio Free Asia.

“We have had information about ARSA, and we learned earlier that the AA would attack police posts,” Zaw Htay said. “We reviewed why our police posts were attacked and have discussed some plans to work on in the region, but we can’t give you the details now.”

Zaw Htay said he believed the attacks were the outcome of meetings between the AA and ARSA in July, but he did not offer any evidence of such contacts between the two mutually hostile groups.

The northwestern corner of Rakhine borders southeastern Bangladesh, where more than 700,000 Muslim Rohingya refugees escaped and sought shelter amid a brutal offensive by Myanmar’s government forces in August 2017.

The crackdown that year followed deadly attacks on police and army outposts by rebels with the Arakan Rohingya Salvation Army (ARSA), a separate armed group that purports to be fighting for the stateless and persecuted Rohingya minority.

“Bangladesh is also firmly committed not to allow its soil to be used by any dissident group of any neighboring country,” the Bangladeshi statement said, noting that Dhaka had offered to conduct joint patrols with Myanmar to stop alleged militant activities along the shared border.

Myanmar did not embrace the offer with enthusiasm, nor did it provide Bangladesh with “specific details and concrete evidence on the alleged terrorist elements and acts,” the ministry added.

Referring to the recent fighting with the Arakan Army, the Bangladeshi ministry described the current clashes as “the outcome of Myanmar’s own political and social dilemma.”

Bangladesh’s government would “highly appreciate” if the Myanmar government did “not make any endeavor to associate Bangladesh with her internal political puzzle,” the statement went on to say.