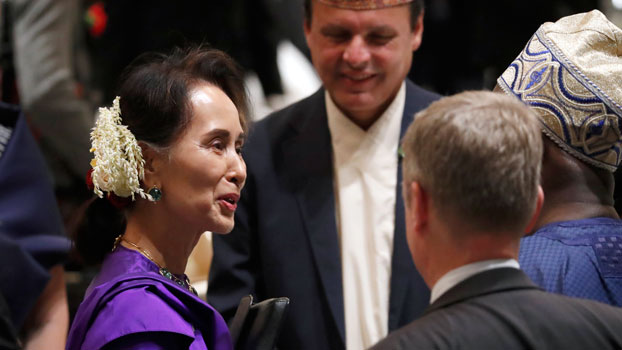 Myanmar leader Aung San Suu Kyi met U.S. Assistant Secretary of State David Stilwell on Tuesday in Naypyidaw to discuss continued American support for the country’s democratic transition, a visit that came as supporters in Myanmar questioned her commitment to pledged reforms that helped her win power in 2015.

Despite U.S. concerns and efforts, analysts in Myanmar say State Counselor Aung San Suu Kyi has not made significant democratic progress in her three years in office as she must run her administration within the confines set out by the powerful military that directly ran the country from 1962-201.

In an interview with Japan’s Nikkei Asian Review on Oct. 23, Aung San Suu Kyi said that Myanmar’s constitution drafted by a former military junta more than a decade ago must be changed in order for the Southeast Asian nation to achieve “complete democracy,” but that this would not occur before the next general election in late 2020.

Before and after Aung San Suu Kyi’s National League for Democracy (NLD) party won the 2015 general election in a landslide vote, the politician pledged to amend the constitution to rid it of undemocratic provisions, including Article 59(f) which prevents her from becoming president because her late husband was a foreign national, as are her two sons.

In January, Myanmar’s parliament created a joint committee tasked with proposing democratic changes to the 11-year-old charter by abolishing or amending articles enshrining the power of the country’s military in politics.

Military lawmakers who are appointed, not elected, control a quarter of the seats in national and regional parliaments and retain a critical veto over proposed constitutional amendments. The military also controls three security and defense ministries.

Lawmakers from the armed forces and the military-backed Union Solidarity and Development Party (USDP) oppose the move because it would diminish their political power. They also have argued that the formation of the committee itself was not in line with the constitution.

“So far, we have been debating in our parliament, and as I’ve noticed, the military are not overly enthusiastic about the amendments that we have suggested,” said Aung San Suu Kyi, who was in Tokyo to attend the enthronement of the Japanese emperor.

When asked if she believes that some constitutional changes can be achieved before the 2020 vote, Aung San Suu Kyi said, “That is difficult to say, and we are not building hopes for the next election on our ability to bring about constitution amendments within the next year.”

‘It’s all about politics’

An NLD party official told RFA’s Myanmar Service that Aung San Suu Kyi’s comments were based on her own assumptions and that the Constitutional Amendment Committee would continue its work in parliament.

“We don’t want you to assume that the constitutional amendments will not be completed after Daw [honorific] Aung San Suu Kyi made the comments,” Aung Shin, secretary of the NLD’s information committee said.

“It’s all about politics, and we will keep doing our job,” he said. “She expressed her assumptions. I am not saying her comments are wrong. The committee of 45 members will keep working toward its mission. I believe that something will be done.”

“We presented the proposal to the parliament to amend it during the regular parliamentary processes, but it became a crisis after the parliament formed the 45-member committee,” he said. “This has made the process more complicated and challenging.”

One USDP lawmaker denied that military legislators have shown a lack of enthusiasm for changing the charter, as Aung San Suu Kyi told the Nikkei Asian Review.

“The military is actually enthusiastic about constitutional amendments,” said Thaung Aye, the party's lawmaker for Pyawbwe township in Mandalay region.

“There have been many submissions for amendments,” he said. “The military is cooperating with us in this regard. I don’t understand why she said the opposite.”

“If they [the NLD] are really willing to amend it, they could do it according to the regular procedures,” he said. “It wouldn’t be that difficult.”

RFA could not reach Brigadier General Maung Maung, leader of a group of military lawmakers in Myanmar's parliament, for comment. 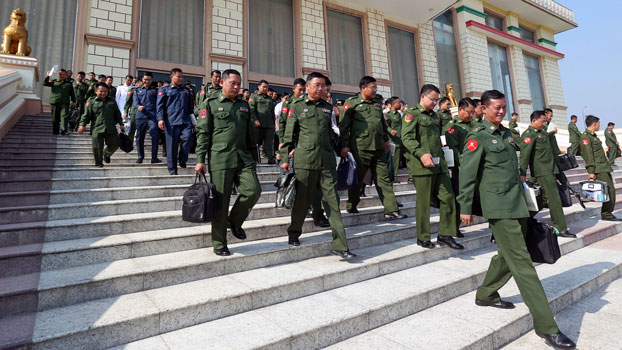 Myanmar military lawmakers leave parliament after a vote to set up a committee to amend the country’s 2008 constitution, in Naypyidaw, Jan. 29, 2019. Associated Press

Failure to change the charter

Others said Aung San Suu Kyi’s comments were a public admission of her party’s failure to change the charter despite campaign promises to do so.

“Finally, she is publicly admitting that the NLD has failed,” said Khin Saw Wai, a lawmaker from the Arakan National Party (ANP) in Rakhine state.

“I think they [the NLD] didn’t try to amend the parts they could have succeeded in amending,” she said. “For example, amending the articles that promote the rights of ethnic minorities and implementing federalism in the ethnic states are achievable.”

Ethnic minority parties like the ANP have been dismayed with the process because they want amendments to the constitution that will establish a federal union and guarantee self-determination. They also oppose lack of progress in amending Article 261.

In September, two lawmakers from the ANP and former NLD lawmaker Sein Win resigned from the Constitutional Amendment Committee, with the latter accusing the state counselor of using the process as a give-and-take relationship.

“Now it looks like she is putting on an act around this issue,” he said. “She gives excuses for not completing the task as if it is a part of a give-and-take relationship.”

“It is known that she met former Senior General Than Shwe three times before the inauguration,” he said, referring to the strongman politician who was Myanmar’s head of state from 1992 to 2011 as chairman of the State Peace and Development Council.

“We don’t know what kind of negotiations and compromises they had between them,” Sein Win said. So far, I think she is playing around this issue.”

Political Analyst Aung Thu Nyein said Aung San Suu Kyi’s comments exceeded the boundaries of her role as state counselor and have undermined the performance of the Constitutional Amendment Committee.

“I think she is overstepping,” he said. “Her comments meddle with the role of the parliament, which has been working on the constitutional amendments. She is the head of the government.”

“The committee that has been formed for making constitutional amendments will keep working on the issue,” he said. “Amending the constitution was one of the NLD’s campaign promises. This has led to the question of whether the NLD is using the issue just to gain votes.”

“We already know that the constitutional amendment process will end up in limbo when the military stops compromising, but she should be telling this directly and openly to the people who have voted for her instead of saying it in Japan,” he said.

“She should be clarifying everything such as why it has not been achieved or how she will keep working on achieving it,” he said. “Only then would this be satisfactory for all of her supporters.”

“They are always finding fault with her,” he said. “I want to ask those who have criticized her if they can make an educated guess like she did. Who else has ever worked as hard as the NLD for constitutional amendments?”

Correction: An earlier version of the story misidentified Nandar Hla Myint as an NLD spokesman. He is a spokesman for the USDP.