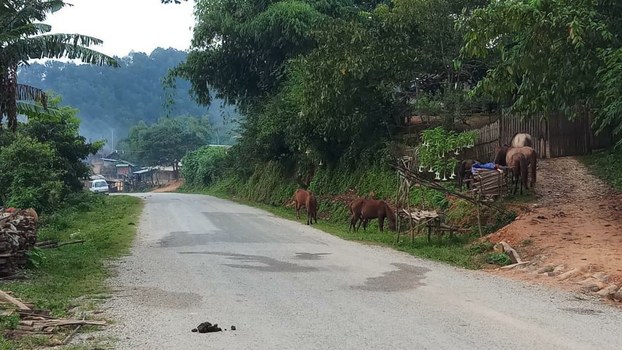 Officials for the local government in Laos’ Houaphanh province say they want to cancel the survey contract of a Chinese coal company after learning that its operations in the province have caused hardship for villagers who have yet to see any compensation.

The company reportedly damaged eight hectares of rice fields, even causing a landslide as a result of digging survey tunnels.

An official from Houaphanh’s mines and energy department told RFA’s Lao Service Tuesday the concession should be canceled for environmental reasons.

“I would like the government to cancel the concession because it negatively impacts the environment and our people,” the official said.

“The Chinese coal firm has been conducting surveys for many years, but they haven’t done anything. But the decision to allow them to continue rests with the [national] government,” the official added.

According to the official the company has been surveying land in the province since 2016.

“The firm just digs soil through 400-500 meter long tunnels for study,” said the official, adding, “There’s no telling if they will continue or stop.”

Officials earlier had given the Chinese firm the greenlight to survey land in the province in 2012, but they only started in 2016.

The affected area lies in Houaphanh’s Samneau district, encompassing Houaykhong, Yong and Laksao villages. Over 200 families will be relocated if the company is awarded a concession to extract coal after their survey is complete.

Villagers in the affected area say they have not been compensated even though the digging has damaged their land.

“Our land has been damaged for two or three years now, but we haven’t been compensated for anything yet,” a villager told RFA on Tuesday.

“We would like to tell the district and provincial authorities about this problem,” the villager added.

The villager said authorities should come see with their own eyes how the digging is affecting village life, and should also discuss compensation plans with the people there.

Another villager was able to put a price on the damage.

“We [should] claim compensation in the amount of 90 million kip [slightly more than $10,000] per hectare because our land is damaged,” the second villager said.

An official from Samneau district’s natural resources and environment office told RFA, “The company agreed to compensate affected villagers last year, but so far, nobody has received any money.”

In 2018, villagers submitted their complaints to the district and provincial authorities to find a solution, and there was a meeting with the company, but the problems have not yet been addressed, according the official.

Reported by RFA’s Lao Service and translated by Ounkeo Souksavanh. Written in English by Eugene Whong.