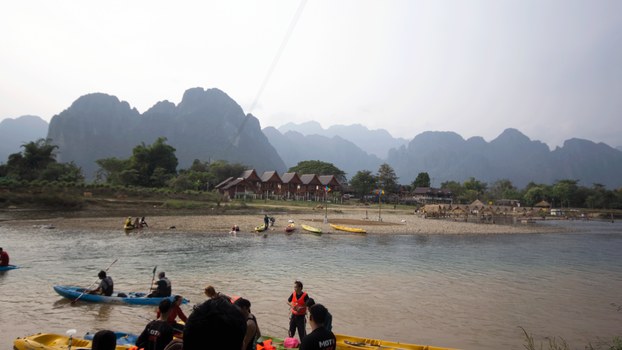 The area of China's proposed Vang Vieng development project in Laos is shown in a March 2019 photo.

A controversial Chinese development project in Laos is now moving ahead despite environmentalists’ warnings and long delays caused by villagers’ objections to surveys of their land by the Chinese firm, Lao sources say.

The Vang Vieng New Development Zone, a $5.3 billion project claiming more than 7,000 hectares of land in one of the country’s most scenic areas, is now in its final planning stage, with its developers having completed feasibility and environmental impact studies, according to media sources.

The China-owned Lao-Vang Vieng New Zone Development Group “is now proposing the project to the government,” an official of the Planning and Investment Department of Vientiane province’s Vang Vieng district told RFA’s Lao Service in a recent interview.

Environmentalists and area residents have long voiced concern that the project could potentially ruin the natural beauty of the popular tourist destination with its mountains, lagoons, and rivers, and destroy the livelihoods and homes of villagers nearby.

Others fear that the project will further strengthen China’s influence and economic reach into the developing Southeast Asian nation, which has become a target for massive foreign investment from its powerful northern neighbor under Chinese President Xi Jinping’s massive Belt and Road Initiative of infrastructure to support trade with China.

“I would like everything in Vang Vieng to be kept as it is, and I worry that in the future everything here will be all Chinese,” one Vang Vieng resident said, speaking on condition of anonymity.

“Many of us might not agree with this project going ahead, but what can we do? We can’t compete with the financial power of the Chinese,” another Vang Vieng resident asked.

“In Laos, the Chinese can buy everything, and no one can oppose them. Whoever tries will go to jail,” he said. “I don’t want the Chinese to have a greater role in Laos. Currently, every project in Laos is already Chinese.”

'Most villagers are opposed'

A third Vang Vieng resident said the proposed project’s area, a zone west of the Xong river and the town of Vang Vieng itself, should be preserved in its present state, adding, “We don’t need modern development. Vang Vieng is a natural tourist attraction, and many people come here to see its natural beauty.”

“Most local people are opposed to the development plan,” he said.

“Most villagers are opposed to this project,” agreed a landowner who lives in one of the 22 villages affected by the plan, and who refused last year with others to allow developers to survey their land.

Areas later surveyed by the Chinese firm covered mountains, water sources, and land already divided into residents’ plots, the landowner said. Meanwhile, villagers without permanent title to their land could easily lose their land outright if the project moves ahead.

“We don’t care if the project takes land somewhere else. But if they try to take our land, which we have been farming for over 100 years, we won’t give it up,” he said. “The compensation they would offer won’t be nearly enough. It’s not worth giving up our land.”

Local businesses have also voiced fears that Chinese development in Vang Vieng will cause a drop in tourist traffic.

“We’re worried that tourists from Europe and America won’t come here anymore, and that the only visitors will be Chinese,” one hotel operator said, while another local businessman said, “Our business relies mostly on Westerners, not Chinese.”

Speaking to RFA, an official of Vientiane province’s Planning and Investment Department said that the Vang Vieng project, even if cleared to go ahead, is a long-term project that will take many years to develop.

“The project owner is just now proposing the project to the government. I don’t know when the government will approve it,” he said, adding that the Chinese developers have said that even though land will be taken for the project, no villagers will be required to move from their homes.

“The feasibility study has been completed, but this is a big project that will have to be approved by the Lao National Assembly. Also, details about compensation have not yet been disclosed,” a Vang Vieng district official added.

Laos grants its citizens the right to occupy land, and some can sell the right to use their land if their family has inhabited it for generations.

But citizens cannot officially own property, and the government reserves the right to reclaim land when this is deemed to be in the public interest, such as for national development projects.

At least a dozen active special and specific economic zones have already been created throughout the country to attract foreign direct investment to boost development and job opportunities in rural areas since 2002 when the first SEZ was set up.

Under Lao Decree 84 issued in April 2016, Lao citizens who lose land to development projects must be compensated for lost income, property, crops, and plants.

Project owners must also guarantee that living conditions for those displaced will be as good as, or better than, they were before the project was launched.

However, compensation payments are often delayed, sometimes for long periods of time, or are paid out in amounts lower than those initially promised, with newly assigned land sometimes deemed unsuitable for farming, sources say.

Laos is very much like Cambodia with regards to China's aggression. Pretty soon, China will own everything and the people of Laos and Cambodia will have to flee or face oppression. They will lose everything.