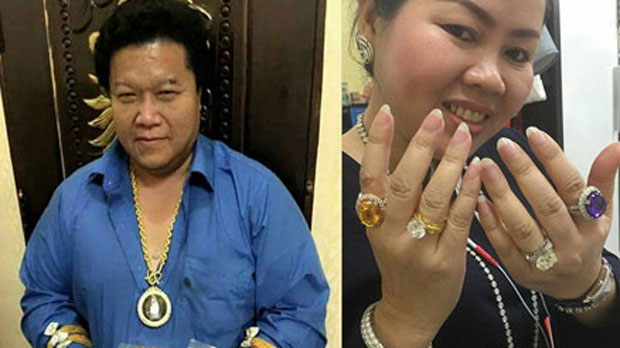 More than 30,000 Laotians who invested in a company headed by owners who were convicted in 2017 of defrauding them in a pyramid scheme are still waiting to be repaid.

The owners, Por Her and Souknaly Thepsimuang, co-presidents of the PS Agriculture and Industry Promotion Import-Export Company of Laos, were convicted of a wide range of charges and were given lengthy sentences that were eventually reduced to 15 years.

The two were detained in September 2017 after investors staged protests at the company’s headquarters in Vientiane. But even though arrests were made and sentences handed down, the investors have not seen a cent returned to them.

“We haven’t heard anything from the company,” an investor from Vientiane capital told RFA’s Lao Service on Wednesday, the two year anniversary of the protest.

“We filled out the forms reporting our losses to the authorities and the Specific Task Committee has collected all our information, but we’ve not been informed of any progress,” the investor said.

Another defrauded investor from Bokeo province complained to RFA on the same day, saying, “My family is broke right now. We lost millions of kip.”

“We’re experiencing hardships because of the drought and need our money back, at least half of it first. Why is the Specific Task Committee so quiet?” the second investor asked.

A third investor, who lost about $12,000, is still hoping to get his money back relatively soon.

“Like many others, I’m still waiting, waiting for the court decision. So far, it has been quiet.”

An investor from Vientiane province said the situation is hopeless.

“I don’t have any hope of getting the money back right now, and I don’t want to talk about it. I think I won’t get it back,” the fourth investor said.

An observer who has been following the case said that even though the criminal case is over and the owners of the company are in jail, the civil case is still pending, so customers must wait until that case is finished before they can be repaid.

A police officer attached to the case at the Ministry of Security refused to answer RFA inquiries about the issue over the phone, asking a Lao Service reporter to send a written request to interview his department first.

But, an official on the case at the Justice Department in the General Prosecutor’s Office explained the delay to RFA on Wednesday, saying, “We, who are responsible for this case, have completed our assessment of the company’s assets and sent a report to the minister. We don’t know what is happening now; the minister might be looking at it.”

The same official further explained that last year, the Specific Task Committee sold some drinking water, 32 cows and a horse for about one million dollars.

The official said authorities are assessing the co-presidents’ personal assets such gold, gold necklaces, gold bracelets and cars. Once having sold all these assets, the authorities will send a report to the Minister of Justice who will decide when and how much money the customers will get back.

Besides these personal assets, PS also has 37 lots of land, 112 vehicles and some buildings.

The Specific Task Committee will pocket all of the money and start their own pyramid scheme.

They'll have to wait a very long long time but they'll never get repaid.