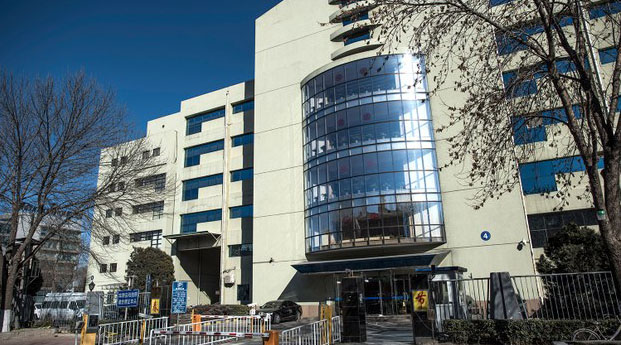 The Tomorrow Group's building in Beijing is shown in a photo taken in 2017.
AFP

Xiao is believed to have been abducted by mainland Chinese state security police from his apartment in Hong Kong's Four Seasons Hotel in January 2017.

The China Banking and Insurance Regulatory Commission said it is targeting 38 major shareholders of banks including Baoshang Bank, which was taken over by regulators last year, and banks affiliated with Anbang Insurance, which was also taken over by the regulator a year earlier.

"There are still a few banks and insurance companies failing to abide by the regulations and which took part in related-party transactions, so as to make profit in improper ways," the commission said in a statement on its website.

"In some cases, assets under banks and insurance companies are even being withdrawn illegally, posing a serious threat to the stability of financial institutions," it said.

The commission said that Xiao's Tomorrow Group had forced Baoshang to make inappropriate loans which contributed to a buildup of nonperforming assets.

Nine insurance and trust companies owned and run by the Tomorrow Group were officially taken over by the authorities last week, state broadcaster CCTV reported.

A WeChat post from the Tomorrow Group questioning the purpose of the takeover was deleted a few hours after posting.

But analysts said that asset seizures are an intrinsic part of factional strife among China's richest and most powerful people, and that no wealth can be generated in China without the ruling faction's say-so.

Anyone who does make a fortune remains at risk of having it taken away again, once their assets, power base, and influence become large enough to pose a potential threat, they said.

He Chun of the China University of Political Science and Law said the takeovers indicate that the authorities are getting ready to bring Xiao to trial.

He said there are clearly powerful people backing both Xiao and Tomorrow Group against the ongoing crackdown under Xi Jinping.

"We can say that he isn't supported by the government, but that there are certain [powerful] forces backing him up," He said.

Tomorrow Group said in a statement that it has always fully cooperated with the investigations into Xiao's affairs, adding that investigation teams had already been sent into a number of financial institutions under the group's control, and had effectively removed their autonomy.

He said the actions against the privately owned Tomorrow Group were part of a coordinated operation targeting private wealth in China under Xi, who gave a speech recently calling for the domestic market to be "strengthened."

"What we are seeing is state-owned enterprises flourishing everywhere ... while private enterprises are shutting down or running into trouble [having assets seized]," he said.

"The main surprise is that the Tomorrow Department also issued a statement speaking out against this takeover and seizure of its assets," Guo said.

He said there were parallels between this situation and a statement from former Anbang Insurance chairman Wu Xiaohui, who accused the government of targeting the conglomerate to enrich a particular political faction.

"The central government was offended by this, and Wu Xiaohui was eventually sentenced to 18 years in prison," Guo said, adding that Xiao would likely suffer a similar fate.

"Once they've gotten rid of him, all of his assets will go to [the government under Xi]," he said. "He will definitely get a very heavy sentence."

"It is normal for one faction to annex [the assets of] another eventually," Ma said. "It's just a shame for the ordinary people who have invested all their capital in the Tomorrow Group."

The crackdown on the Tomorrow Group comes amid signs that Xi increasingly wants both private and state-owned companies to accept the leadership of the ruling party.

Addressing a symposium of entrepreneurs on Tuesday, Xi lauded the role played by state-owned and private companies in helping China's social and economic recovery from the impact of the coronavirus pandemic, CCTV reported.

To do this, they had acted "under the leadership of party committees and government at every level ... and actively participated in the people's war against the pandemic," Xi said.

Major private enterprises in China, including foreign-owned companies, are increasingly under pressure to set up Chinese Communist Party committees to oversee their operations.

Since November 2017, CCP committees have been expected to take a leadership role in state-owned companies with more than three CCP members, while they are expected in private enterprises merely to ensure that no laws are broken.

CCP cells can and do exist in foreign-owned companies and subsidiaries in China, but the Chinese partner in a joint venture can't force the foreign partner to allow a party committee to take a leadership role, under a law governing joint ventures.