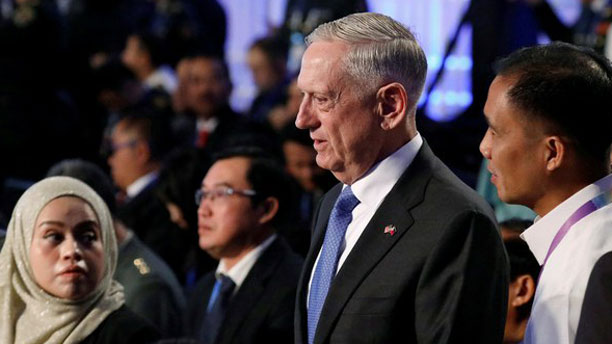 The American, Japanese and South Korean defense chiefs jointly called on North Korea to put an immediate end to its nuclear and missile tests, after they met Tuesday on the sidelines of an ASEAN ministerial conference in the Philippines.

U.S. Secretary of Defense Jim Mattis joined his counterparts from Japan and South Korea, Itsunori Onodera and Song Young-moo, in discussing recent actions by Pyongyang that have ratcheted up security tensions in the Korean Peninsula and East Asia.

“The three ministers condemned, in the strongest terms, North Korea’s continued provocative actions,” the three officials said in a statement.

North Korea’s two recent launches of missiles that flew over Japan and its nuclear tests in September “constitute an unprecedented and grave threat to their countries as well as to the rest of the world,” the ministers said.

The three agreed to boost intelligence sharing and enhance defensive capabilities to include, among others, “execution of multiple combined flight training missions with U.S. bomber aircraft.”

Mattis is on a tour of Asia that will take him to Seoul for annual defense talks, which will precede a visit to South Korea next month by President Donald Trump.

Kim has not backed down in the face of international pressure and traded threats with Trump, amid fears that a war of words could escalate into a physical war that could draw in Japan and South Korea, which host American bases.

Mattis and the defense chiefs of both East Asian nations agreed that North Korea’s development of nuclear and ballistic capabilities “threatens the security and prosperity of the three countries.”

They also agreed to push for a diplomatic solution to the North Korean crisis and curb Pyongyang’s “weapons of mass destruction programs.”

During the meeting at Clark freeport, a former U.S. military base north of Manila, Mattis met separately with his counterparts from the 10-member Association of Southeast Asian Nations (ASEAN) bloc to push for stronger multilateral defense cooperation.

In a statement, the Pentagon said that Mattis pushed the need for ongoing cooperation and for applying “greater diplomatic and economic pressure” on the North, until it implements its obligations to the U.N. Security Council.

Australian Defense Minister Marise Payne, who was at the Philippine conference, said her country supported calls for Pyongyang to exercise restraint, warning that it risked more sanctions.

“The greatest possible pressure must be brought to bear on the regime through the exercise of sanctions,” she said. “At the end of the day, the regime’s behavior is inherently dangerous to global stability.”

She said Australia supported the U.S. describing North Korea’s weapons test as “provocative” and in breach of “global agreements and international norms.”

“And Australia has been extremely strong in reiterating our position which supports the U.N. Security Council and the U.S., which is, we will impose the strongest possible sanctions on the North Korean regime,” she said.

All of the ASEAN member-states maintain relations with North Korea.

On Tuesday, Philippine Defense Secretary Delfin Lorenzana suggested that U.N.-backed international sanctions on North Korea were counter-productive in pressuring Pyongyang to rein in its nuclear ambitions.

“Sanctions [are] not working but still strengthening the hand of Mr Kim Jong Un,” Lorenzana told reporters, according to Agence France-Presse.

“It feeds on his fears of being invaded also and so he rallies his people to fight against invaders, to ‘support me.’ Instead of weakening him, it is strengthening his hold on his people,” said the defense chief of the Philippines, a longtime U.S. ally in Asia.