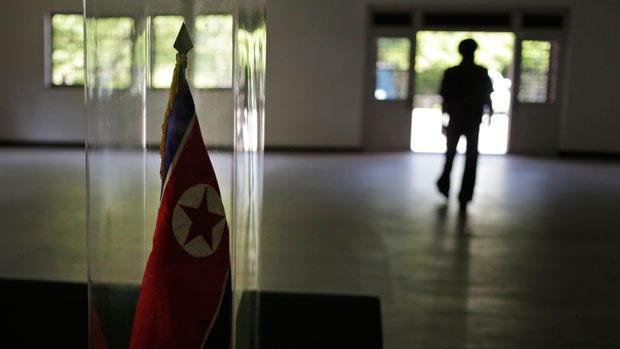 A North Korean soldier stands silhouetted at the entrance to the armistice museum in Panmunjom, June 20, 2018.
AP

North Koreans for years have dug up the remains of U.S. soldiers killed during the 1950-53 Korean War, hiding them away in the hope they may someday bring a cash reward when relations between the two countries improve, North Korean sources say.

“Residents are now paying closer attention to this issue following the announcement in Singapore that North Korea is thinking of sending the remains of U.S. soldiers home,” RFA’s source said, speaking on condition of anonymity.

“It is widely believed by North Koreans that they might get good money for the remains of U.S. soldiers,” RFA’s source said.

“When people find these remains near Korean War battlefields, they often keep them privately instead of reporting them to the authorities,” he said.

At Jangjin, site of the 1950 Battle of Chosin Reservoir, many U.S. remains have been found complete with boots, uniforms, and identifying dog tags, the source said, adding that North Korean residents care only about the bodies of U.S. soldiers.

“When they find the remains of North Korean or South Korean soldiers, they just leave them there,” he said.

For now, no reward is being offered for remains handed over to authorities, the source said.

“But if they can deliver the remains of even one U.S. soldier, along with his dog tags or some other evidence of identity, they can collect as much as $1,000 from a Chinese broker.”

North Koreans are very much aware that the U.S. has never stopped looking for the remains of soldiers who died or went missing in battle, “so they believe they can make good money for these someday, and are keeping them in secret without reporting them to the authorities,” he said.

'Many still out there'

Also speaking to RFA, a source in South Hamgyong province noted that following the Singapore summit, North Korea’s Central Committee pledged to send back the remains of about 200 U.S. soldiers.

“But probably there are many more remains of U.S. soldiers out there that people are hanging onto privately,” the source said, also speaking on condition he not be named.

“The General Political Bureau is controlling the exhumation work under tight security, with all the necessary equipment being transported to the sites,” he said.

I note your report from AP: "According to a recent AP report, some 7,800 U.S. troops remain unaccounted for from the 1950-53 war, of which about 5,300 were lost in North Korea." Mr Kim should allow these relatives to be exhumed by fellow Americans not grave robbers. Mr Trump should demand that Mr Kim allow US military into NK to repatriate with dignity US service men and women, deceased. There are other deceased held by North Korea including Australians who would best rest in Australian soil.