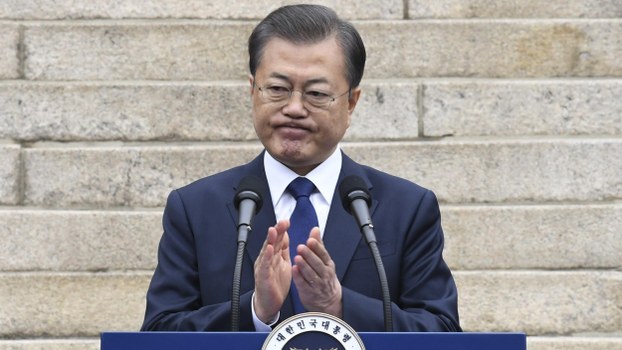 South Korea's President Moon Jae-in applauds as he gives a speech during a ceremony to mark the 101th anniversary of the March 1st Independence Movement Day in Seoul on March 1, 2020.

The letter, dated Feb. 21, was written by the International Coalition to Stop Crimes Against Humanity in North Korea (INCK) on behalf of 69 organizations and seven concerned individuals from 23 countries. It said that the South Korean government should “clarify and strengthen” its position on promoting North Korean human rights.

The letter criticized two specific decisions of the Moon government.

“In November, your government decided to withdraw from co-sponsoring a resolution in the UNGA [United Nations General Assembly] condemning the human rights situation in North Korea, despite supporting every past annual resolution since 2008,” the letter said.

“The same month, your government made a decision to deport two North Korean fishermen accused of murder to face a substantive risk of torture and possible death in North Korea. Your government has not provided adequate explanations regarding either of these events,” it added.

The Moon government has been taking criticism not only for these actions, but also for not pressing North Korea on human rights issues in recent negotiations.

A Financial Times report from Nov. 2018, shortly after the third inter-Korean summit that year, noted that critics thought Moon was focusing too much on trying to get North Korea to denuclearize and open up through normalization of relations and economic integration, and “betraying his political convictions” as a former human rights lawyer by ignoring “ignoring the severe deprivation and abuse suffered by millions of North Korean citizens.”

Those voices have only gotten louder since 2018.

The opposing view is that human rights abuses in North Korea must be downplayed in order to get Pyongyang to the negotiating table in the first place, and keep it there, but the NGOs feel this is the wrong approach.

“President Moon Jae-in and his government should stop appeasing Kim Jong Un with the unfounded expectation that it will induce him to engage in dialogue,” said Eun-Kyoung Kwon, secretary general of ICNK, in a statement published Tuesday by the U.S.-based Human Rights Watch.

“Reducing the pressure on North Korea is a betrayal of the long-suffering North Korean people. The South Korean government needs to re-commit to promoting and protecting those most at risk in North Korea,” Kwon added.

In the open letter, the NGOs criticized a November statement from Seoul’s foreign ministry explaining why South Korea did not agree to sponsor the UNGA resolution, calling it “troublingly innocuous.”

“The ROK government will continue efforts to promote the human rights in the DPRK through peace and prosperity on the Korean Peninsula,” the ministry said in November.

“In our view, actual improvement of human rights cannot be accomplished just by promoting peace, dialogue, or development projects. Discussing North Korea’s human rights record and pressuring the North Korean government to respect the freedom and dignity of all people in North Korea and fulfil its obligations as a member of the international community are necessary practical elements in negotiations, whether on economic issues, security matters, cultural exchanges, or any other matter,” the NGOs said.

The NGOs also noted that they were aware that North Korea becomes hostile when criticized on human rights issues, but said that removing pressure from the equation would likely do nothing to solve these issues.

“In your negotiations with North Korean leader Kim Jong Un, we ask you to include discussions on human rights issues and call on his government to expand cooperation with UN mechanisms, including acknowledging the mandate of Tomas Ojea-Quintana, Special Rapporteur on the situation of human rights in the DPRK, as well as that of the OHCHR [Office of the High Commissioner for Human Rights] Seoul office,”

HRW also quoted Christian Solidarity Worldwide’s Benedict Rogers, who said, “True peace on the Korean peninsula can only come when the basic human rights of the North Korean people are respected, so it can’t be in South Korea’s interest to ignore the terrible crimes against humanity the North Korean regime committed.”

“If he wants to achieve progress, President Moon should put North Korea’s human rights crisis at the center of his diplomatic agenda and restart his work with the international community to end impunity and protect human rights.”