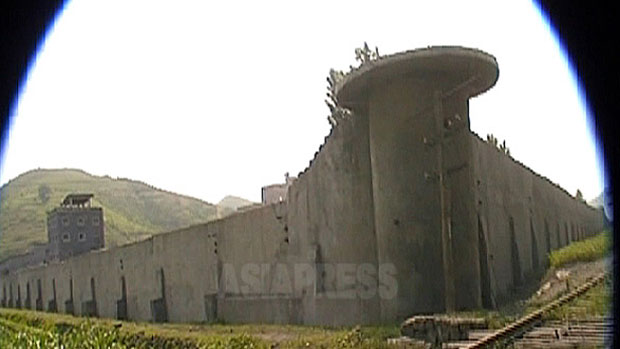 A prison camp in North Korea's South Pyongan province is shown in an undated photo.
Asiapress

Sources in repressive North Korea say that the regime is turning a blind eye to human rights abuses as conditions in the country’s numerous labor camps are worsening. Crimes against humanity are rampant within the camps, which, according to a 2017 report by the War Crimes Committee of the International Bar Association (IBA), house between 80,000 and 130,000 political prisoners.

RFA’s Korean Service learned from its sources that those detained in the camps must endure hunger onset by food shortages, fatigue due to hard labor, injury from physical assault and disease from unsanitary living conditions.

“A family member of someone at Chungsan labor camp went to visit and shocked to find the inmate was about to collapse due to malnutrition,” said a source from South Pyongan Province on Sunday.

“These camps are where people go when they’ve been sentenced and imprisoned for serious crimes,” the source said.

The source explained that once the prisoners arrive in the camps, guards cease treating them like humans, and see them as outlets to exercise what little power they might wield.

“The guards treat the inmates as if they were cows and horses, and if [the prisoners] don’t listen to them, [the guards] assault them harshly,” said the source.

The source spoke about the horrid living conditions, saying “[The day] starts at 5:00 a.m. and prisoners are mobilized to do hard labor such as farming and construction work all day long. They suffer from hunger especially in the spring, when there isn’t enough food.”

“The combination of high-intensity labor and not being fed enough makes malnutrition a constant issue for prisoners,” said the source.

The source said that women actually had it worse in the camps because they are subject to additional work after finishing the hard labor they do in the day alongside the men.

“Women don’t even have time to wash their clothes because they have to go do extra work like making wigs and eyelashes. Because of the poor hygiene they are exposed to so many diseases and have to set aside time to remove lice,” said the source.

Another source, from North Hamgyong province said that just like in South Pyongan’s camps, food shortages are the biggest concern for camps in North Hamgyong.

“Even a healthy person loses more than 10 kg (slightly more than 22 pounds) in a month. On top of that, if they don’t have any family members visiting them, they sometimes collapse or die from malnutrition,” the second source said, referring to how inmates receive living supplies from their family.

“Recently an inmate with a disease died after failing to receive treatment in time while in prison. However, the labor camp has not come up with any ways to resolve this problem [should it happen again,] so people are getting angry.”

In January, RFA reported that a prison camp in South Pyongan had enlarged a convenience store attached to the facility so that authorities could more effectively siphon money from inmates’ family members.

As it is prison policy not to allow outside items, necessities that visitors want to give to their incarcerated family members have to be purchased at this official store at several times the market price.

The report detailed how often the inmates are forced to lie to their visiting family, asking for goods that is secretly for the guards themselves. If they fail to deliver, they get punished.