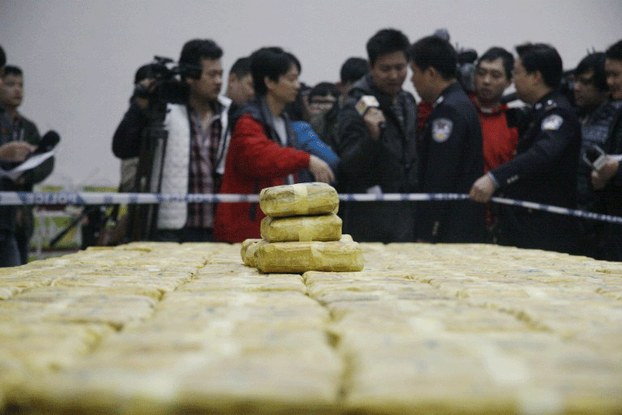 Blocks of methamphetamine confiscated by Chinese police during their latest crackdown on drugs are displayed at the Changsha Public Security Bureau in Changsha city, central China's Hunan province, March 18, 2013.

Chinese authorities in early May made several arrests in connection with a North Korean drug smuggling ring in the Changbai Korean Autonomous county in Jilin province, just across the border from North Korea.

According to multiple sources, the Chinese government is paying special attention to this case because during police investigations, the ring was found to have connections with North Korean state security agents, adding a new wrinkle to recently tense relations between the two countries.

A source from Changbai told RFA’s Korean Service last week that following the arrests, there has been an increased security presence at the border.

“They have added two new guard posts on the way from Changbai country to the southern border [with North Korea]. They are also more comprehensive with their inspection of vehicles near the border,” said the source.

“Their inspections have increased in intensity because the police caught some big-time drug dealers. They were smuggling bingdu [methamphetamine] from Hyesan, a city just across the river in North Korea,” the source said.

The drug, known as crystal meth in the west is known by several names in the region. Recent RFA reports referred to the drug as “ice,” an English translation of its North Korean street name, oreum. Bingdu is a Chinese street name for the same drug.

The source believes that the recent drug busts have uncovered the North Korean government’s recent involvement in drug manufacture and trafficking as a method of making foreign currency, which the country desperately needs as it transitions to a market economy while under sanctions put in place by the U.S. and the U.N.

“North Koreans smuggling large amounts of meth into China are not small-time private smugglers. They are part of a foreign-currency-generating organization that is protected by powerful North Korean authorities.”

“They tend to travel through cities on the North Korea-China border like Hyesan and Changbai, and they’ve been making lots of money bringing meth into China,” said the source.

“It was revealed during investigations that the members of the smuggling ring that were arrested by the police [in early May] are actually agents of the [North Korean] State Security Department’s arrest team, and they were dispatched to China to arrest another North Korean State Security official who defected to China not so long ago,” said the source.

The source said that the agents had previously been able to use their connections in the Chinese government to gain access to the country to carry out their official duties, but they were able to make some money on the side by smuggling drugs.

“North Korean State Security agents are always coming into China with the help of China’s Ministry of State Security, so they can search for North Korean defectors,” the source said. “They then use their personal ties with the Chinese officials to carry out large-scale drug trafficking in China.”

A second source, from nearby Yanji county said the practice of smuggling on the side while conducting official business was common practice.

“There have been close to a thousand [North Korean] state security agents dispatched to China since last year. They secretly operated in Changbai, Yanji and the Shenyang area and were able to catch high-ranking North Korean defectors and collect information while earning foreign cash by smuggling meth,” said the second source.

“While it is true that Chinese state security agents helped their North Korean counterparts enter and engage in activities in China, it is not yet known whether [they] knew about the meth smuggling,” the second source said.

“While Chinese authorities tend to turn a blind eye to most smuggling activities, they have never been tolerant of drug smuggling. It is quite possible that North Korea was able to keep their role in the meth trade a secret from China’s state security agents,” said the second source.

The second source implied that China has been losing face as North Korean meth, trafficked through China has recently surfaced in South Korea, Japan and the United States.

“The Chinese government is determined to strictly deal with this drug smuggling case in Changbai, and will withdraw [its own] state security agents related to the case. They are showing North Korea that they are now willing to severely punish drug smuggling activities,” said the second source.

With relations between the two countries turning rockier, the second source said this could be the start of a Chinese government that is less tolerant of Pyongyang’s corruption.

“Until now, Chinese authorities have been looking the other way when North Korean agents engage in corruption with Chinese judicial authorities, such as police or border security personnel. But with the arrests [and the subsequent crackdown], the Chinese authorities are creating a mood of fear as if they are declaring war against North Korea’s illegal activities,” the source said.

North Korea is well known for utilizing the drug trade as a source of foreign cash, and had been doing so as far back as at least the 1970s under the direction of the Kim Il Sung regime. A report published in 2014 by the Committee for Human Rights in North Korea details how in 1976, the country defaulted on international debts and its embassies were told to “self-finance” through drug-smuggling.

The report also revealed that a major shift away from drug trafficking towards state-sponsored methamphetamine production occurred in the mid-1990s signaling a change in strategy after Kim Jong Il came to power and the collapse of the Soviet Union.

They lose face by turning blind eye. Use good eye instead, then will not lose face anymore, why cannot they see that ? by using blind eye in first place !