US, South Korean Presidents Try to Keep Diplomacy with North Korea on Track 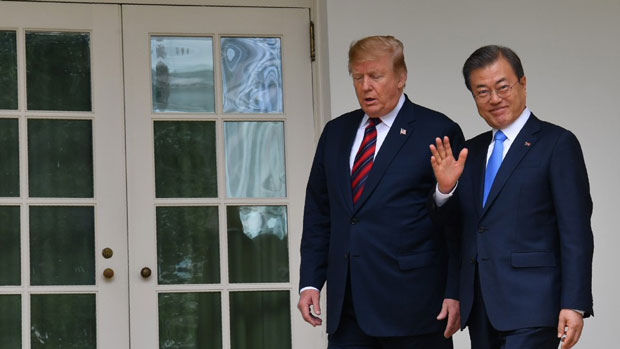 South Korean President Moon Jae-In and U.S. President Donald Trump agreed Thursday to keep up diplomacy with North Korea, including possible new summit talks with the North’s leader Kim Jong Un, but the allies disagreed on the level of economic sanctions needed to press Pyongyang to give up its nuclear weapons.

At their first meeting since Trump’s failed Hanoi summit with Kim Jong Un in February, Trump argued for keeping in place sanctions designed to starve the North’s nuclear and missile programs of hard currency, while saying he was open to meeting Kim a third time.

"We want sanctions to remain in place," Trump said at the White House, according to U.S. media. "I think that sanctions right now are at a level that's a fair level."

"There are various smaller deals that maybe could happen," Trump said. "You could work out step-by-step pieces, but at this moment, we're talking about the big deal. The big deal is we have to get rid of the nuclear weapons."

Moon did not mention sanctions directly in his White House appearance, but he has called for sanctions relief to coax North Korea to begin nuclear disarmament.

North Korea experts say that Moon, who wants to remove curbs on inter-Korean economic projects, would privately lobby Trump for a gesture to keep Kim engaged in the diplomacy.

The Vietnam summit ended in disagreement over how Kim might shed its nuclear arsenal, as Trump demands and the sanctions relief that Kim seeks as a reward for cooperating.

Trump, who also met Kim in Singapore last year, said: "I enjoy the summits, I enjoy being with the chairman."

Kim is "a person I've gotten to know very well, and respect and hopefully, and I really believe over a period of time, a lot of tremendous things will happen. I think North Korea has a tremendous potential," Trump told reporters before the talks.

Moon said he was hopeful that a third U.S.-North Korea summit would happen. His national security adviser said Thursday that Moon would also try to have another meeting with Kim.

Bruce Klingner, a senior research fellow at the Heritage Foundation think tank in Washington, told RFA that the disagreement about sanctions shows a rift between the U.S. and South Korea in terms of North Korea policy.

“It showed two allies remain far apart on approach to North Korea. President Moon wants to reward North Korea even though there has been no movement in denuclearization. The U.S. said it has no interest in that approach,” he said.

Richard Bush, a senior fellow at the Brookings Institution said, “I give President Moon credit for trying to engage President Trump on [the North Korea] issue and trying to get closer alignment in our strategy toward North Korea. It appears that his attempt didn’t make too much progress.”

About one hour before the scheduled meeting, around 40 Korean-Americans gathered near the near the White House in a show of support for President Moon, chanting slogans like “Peace maker president” and “We love Moon!”

Meanwhile, a smaller group of 10 Korean-Americans chanted phrases in support of Trump’s hard line on North Korea and accused Moon of being a North Korean spy.

Reported and Translated by RFA’s Korean Service. Written in English by Eugene Whong.